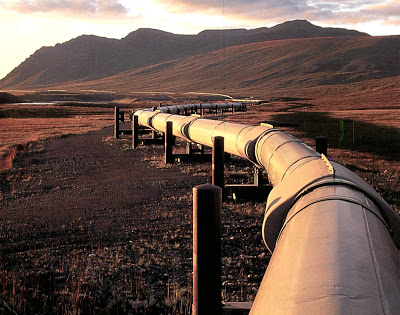 Iran-Turkmenistan gas pipeline. The Turkmenistan government is apparently still interested in moving forward with a pipeline through Afghanistan. Photo from Tehran Times.
Conclusion: 2001-2010
A People’s History of Afghanistan

[If you’re a Rag Blog reader who wonders how the Pentagon ended up getting stuck “waist deep in the Big Muddy” in Afghanistan (to paraphrase a 1960s Pete Seeger song) — and still can’t understand, “what are we fighting for?” (to paraphrase a 1960s Country Joe McDonald song) — this 15-part “People’s History of Afghanistan” might help you debate more effectively those folks who still don’t oppose the planned June 2010 U.S. military escalation in Afghanistan? The entire series can be found here.]

Enemy military losses…went unrecorded. However, a number of war crimes were committed by allies of the United States. For example, on 25 November hundreds of Taliban prisoners were killed in the prison at Mazar-i-Sharif, after a revolt in which a CIA agent who had been interrogating prisoners was killed. Apparently many prisoners were summarily executed once they had been recaptured. The most serious incident concerned the deaths of Taliban and foreign prisoners who were suffocated inside containers. According to a meticulous inquiry, around 3,000 Taliban prisoners were massacred by Northern Alliance forces, an atrocity which by some accounts was perpetrated in the presence of American soldiers. Despite the gravity of these reports, and the known locations of communal graves, the UN declined to carry out an inquiry in order not to embarrass the Afghan and U.S. government…

As Revolution Unending observed, “his exile in the United States… enabled Karzai to gain the backing of the U.S. government and therefore achieve his present position.” According to the same book, Karzai “is the son of a… Pashtun family from Kandahar ” and is “related to the royal family” of Afghanistan, whose members controlled the government of Afghanistan until the 1970s.

But outside of Kabul, “local warlords and militia commanders… were able to take de facto control of their respective areas,” and “Karzai’s tolerance of the warlords has been seen by Afghans in general as a weakness,” according to Angelo Rasanayagam’s Afghanistan: A Modern History.

Since 30 to 50 percent of the recruits in the Karzai regime’s new Afghan Army of 6,000 troops deserted in 2003, in 2004 the Pentagon still had to spend $11 billion on U.S. military operations in Afghanistan in order to prop up the Karzai regime. As Afghanistan : A Modern History observed:

…The balance of armed forces was weighted heavily on the side of the warlord militias, variously estimated at between 60,000 full time fighters to over 100,000, if one includes “part-timers” from the swollen ranks of the unemployed…

As before, warlords have been able to expand their financial base by imposing customs duties and other taxes on their own account. Some have benefited substantially from smuggling and drug trafficking…The opium crop earned Afghan farmers and traffickers some $2.3 billion, or around 50 percent of the gross domestic product… The crop in Afghanistan accounted for over 75 percent of the world’s illicitly grown opium in 2003… The New York-based Human Rights Watch has produced detailed documentation of the abuses committed with impunity by militia leaders and their followers…

The U.S. soldiers first sent to occupy Afghanistan in late 2001 (who now number between 70,000 and 100,000) were apparently seen by many people in Afghanistan as yet another set of the foreign invaders that have attempted to manipulate Afghanistan’s internal affairs since the 19th-century. As Revolution Unending observed in 2005:

The U.S. forces are unwelcome, especially in the Pashtun areas, where the civilians have complained of harassment. Regularly and predictably, military operations result in civilian casualties… For instance, 42 Afghans died and 181 were wounded on the night of June 30-July 1, 2002, when four villages near Kabraki in the province of Uruzgan were bombed during a marriage ceremony… The treatment of prisoners of war also does not measure up to international standards. In a communique on January 28, 2003 the World Organization Against Torture stated that Taliban detained by the Americans had been subjected to torture in CIA interrogation centers, particularly at Bagram air base in Afghanistan and on the island of Diego Garcia…”

Around 1,025 U.S. soldiers have been killed and around 5,275 have been wounded in Afghanistan since October 2001 (along with around 500 troops killed from other nations whose governments agreed to send troops to fight with the NATO-led International Security Assistance Force [ISAF] — which, besides its 70,000 to 100,000 U.S. soldiers, now includes 38,000 troops from other nations).

But the number of Afghan civilian casualties produced by the Pentagon’s war in Afghanistan since October 2001 has been far greater. As James Lucas’s “America’s Nation-Destroying Mission in Afghanistan” article, for example, noted, “since the U.S. started its bombing in 2001 an estimated 7,309 Afghan civilians have been killed by U.S.-led forces as of June 20, 2008, according to an estimate made by University of New Hampshire Professor Mark Herold.”

In his “ America ’s Nation-Destroying Mission in Afghanistan ” article, Lucas also summarized what life is apparently like for the people of Afghanistan in 2010:

Today the ordinary Afghan is caught between three forces: the U.S., the Taliban, and the puppet government composed of former members of the Mujahideen whom many Afghans would like to have tried as war criminals. Also, the Upper House of Parliament is not a democratic institution, its members being appointed by the President… Up to 60% of the deputies in the Lower House are directly or indirectly connected to current and past human rights abuses.

Under the newly established government in 2001, women were allowed to once again work and go to school. Nevertheless, the abuse of women continues, since the government is too weak to enforce many of the laws, especially in the rural areas.

According to Human Rights Watch, “The law gives a husband the right to withdraw basic maintenance from his wife, including food, if she refuses to obey his sexual demands. It grants guardianship of children exclusively to their fathers and grandfathers. It requires women to get permission from their husbands to work. It also effectively allows a rapist to avoid prosecution by paying ‘blood money’ to a girl who was injured when he raped her.”

…About one in ten Afghans is disabled, mostly due to the wars and landmines. Their life expectancy is about 43 years…

Although more than 3.7 million Afghan refugees have returned to their homes in the past six years, several million still live in Pakistan and Iran. About 132,000 people are internally displaced as a result of drought, violence and instability. Furthermore, there are reportedly about 400,000 orphans in Afghanistan.

Afghanistan suffers from an unemployment rate of 40 percent and most of those who have jobs earn only meager wages. Many youth joined the Mujahideen or Taliban in order to receive some food, shelter and income. The average educational level of Afghans is 1.7 years of schooling, which severely limits their job opportunities. As many as 18 million Afghans still live on less than $2 a day.

But the Turkmenistan government is apparently still “interested in moving forward with a natural gas pipeline through Afghanistan,” according to a Feb. 15, 2010 UPI article. The same article noted that the proposed 1,044-mile Turkmenistan-Afghanistan-Pakistan-India [TAPI] pipeline “is seen as a rival to a long-delayed natural gas pipeline from the Iranian South Pars gas field” and “TAPI is favored by Western powers over the South Pars option because of diplomatic concerns with dealing with Iran.”

And since much of the $230 billion that the U.S. War Machine has spent on the endless war in Afghanistan between October 2001 and the end of 2009 has gone to private war contractors, the recipients of the Pentagon’s lucrative war contracts have also apparently profited much more from the 21st-century historical situation in Afghanistan than have the people of Afghanistan.

So, not surprisingly, the Pentagon is still apparently planning to use some of the additional 30,000 U.S. troops sent to Afghanistan in 2010 in a planned military offensive against the Taliban in Kandahar this June 2010 that it has nicknamed “Operation Omid.”

The word “omid” means “hope” in the Dari language of Afghanistan. Yet — as this people’s history of Afghanistan indicates — people in Afghanistan are not likely to accept the endless presence in their country of still more foreign troops. Whether they come from the UK, from India, from Pakistan, from Saudi Arabia, from Russia, from the United States, from Canada, from NATO, or from the ISAF.

So it’s not necessarily historically inevitable that a Taliban guerrilla force of about 25,000 Afghan fighters will be easily defeated militarily by the Obama Administration’s troops in 2010, if the U.S. troops continue to be seen as foreign invaders by most people in Afghanistan in 2010. As an Afghan farmer in Kandahar named Abdul Salaam recently told the Global Post (April 19, 2010): “You cannot bring peace through war.”