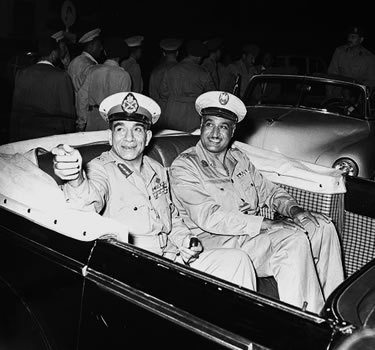 By the late 1940s, Egypt’s “playboy king,” Farouk, had become “notorious for womanizing — often with shocking flagrancy — and gambling, passing much of his time at night clubs,” according to Jason Thompson’s A History of Egypt.

And despite the arrest of secular left Egyptian activists in the late 1940s, opposition to British imperialism’s puppet regime of King Farouk developed among some politically nationalist and anti-imperialist Egyptian military officers, following the Egyptian military’s defeat in the 1948-49 Israeli-Arab War.

In addition, in 1950 “a wing of the Muslim Brotherhood” in Egypt even “called for collaboration with `communists’ against imperialism” since the 39,000 British troops still occupying Egyptian soil in 1950 were three times the number of British troops legally allowed in Egypt under the terms of the 1936 treaty between the UK and Egyptian governments, according to Selma Botman’s The Rise of Egyptian Communism, 1939-1970.

By October 1951, the Egyptian prime minister, al-Nahhas, was pressured by public opinion in Egypt to declare “null and void” the regime’s 1936 treaty with the British government. And between October 1951 and January 1952, “applying the tactics of the united front,” anti-establishment “left and right-wing political forces” in Egypt “engaged in the Battle of the Canal Zone,” according to The Rise of Egyptian Communism, 1939-1970.

As the same book also recalled:

The termination of the 1936 Treaty precipitated…concerted activity. Demonstrations raged in the larger cities. Guerrilla warfare broke out in the Suez Canal base [of the UK military]…80,000 Egyptian workers and office employees left their…British-affiliated jobs, thus paralyzing the workings of the Suez Canal base… Workers deserted British factories… Longshoremen refused to handle British supplies…

A general strike closed all factories and students marched on the center of Cairo.

On January 19, 1952, the British military base at Tell-al-Kabir was attacked by anti-imperialist Egyptian commandos; and, in response, 50 members of Egypt’s Bullaq Nizam auxiliary police force were massacred by British troops. Then, according to The Rise of Egyptian Communism, 1939-1970, the following happened on Jan. 26, 1952 in Egypt:

A general strike closed all factories in the country. Students from the universities and al-Azhar marched on the center of Cairo and joined forces with workers gathering from the suburbs… The business district of Cairo, with its foreign-owned…businesses, was set afire.

According to A History of Egypt:

January 26, 1952, became known as Black Saturday… Some 400 buildings were destroyed and 30 people lost their lives. Only after several hours…did the army restore order.”

In an attempt to prevent the January 26, 1952 general strike in Egypt from developing quickly into a mass-based anti-imperialist revolutionary movement to overthrow Egypt’s monarchical regime and finally democratize Egyptian society, the regime’s prime minister  imposed martial law in Egypt again, suspended the Egyptian Constitution, arrested about 250 Egyptian political opponents of the regime, and imposed censorship on all the mainstream Egyptian newspapers.

Between late January and July 1952, the objective conditions for an anti-imperialist political revolution in Egypt continued to exist, since “the British soldiers were still in occupation of part of Egypt,” “rising prices were accompanied by increased unemployment” in Egyptian cities, “and the higher rents being imposed on Egyptian peasants by Egypt’s landowning elite” had increased the suffering in Egypt’s rural areas, according to The Rise of Egyptian Communism, 1939-1970.

So although the secular left Democratic Movement for National Liberation [DMNL] opponents of the regime did not encourage the secret dissident Free Officers military group of Egyptian nationalist opponents of British Imperialism — that Gamal Abdel Nasser led — to overthrow the regime, on July 23, 1952, the Free Officers group seized power from King Farouk’s regime in a bloodless military coup — with the apparent approval of the CIA.

They created a Revolutionary Command Council [RCC] in Egypt; and “on July 26 [1952], Farouk sailed from Alexandria aboard the royal yacht al-Mahrussa into an inglorious exile that ended with his death in a Rome nightclub 13 years later,” according to A History of Egypt.

According to Rutgers University Professor of History Lloyd Gardner’s The Road To Tahir Square, “there is some evidence that” the coup by Nasser’s Free Officers group “had CIA involvement — or at least a friendly nod.”

As the same book also noted:

A few hours after the takeover, one of the plotters met with a U.S. military attaché to assure him of the revolutionary council’s pro-Western sentiments and to ask for his help in persuading the British not to intervene… There remains considerable mystery about what, if any, role the CIA played in Farouk’s overthrow. Because Kermit `Kim’ Roosevelt Jr… who had played a key role in returning the Shah of Iran to his throne, had been assigned to arrange a liaison with the Egyptian colonels, there were stories about the “company”’s role even at the beginning. And there were many boasts about “my boys,” as [then-U.S. Ambassador to Egypt Jefferson] Caffery supposedly referred to the new regime…

But according to The Rise of Egyptian Communism, 1939-1970, “the DMNL was given advanced knowledge of the military coup d’etat through Ahmad Hamraash, leader of the DMNL’s military branch, who was summoned to Cairo from Alexandria by Nasser” the day before the coup and was “briefed” by Nasser “on the events to take place”; and since “two prominent Free Officers, Aid dl-Halim Ami and Yusuf Siddiq, were sympathetic to the idea of the Left,” after the coup took place, “the DMNL initially supported the Free Officers’ coup.”