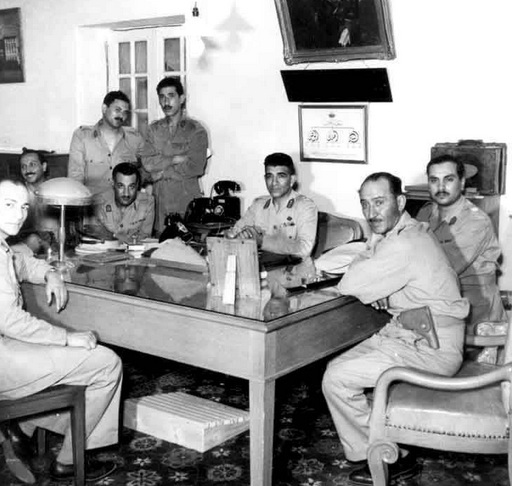 The Egyptian Free Officers after the coup, 1953. Image from Wikimedia Commons.

While not encouraging Nasser’s Free Officers military coup of July 23, 1952 — which set up the Revolutionary Command Council [RCC] — prior to the coup the anti-imperialist Democratic Movement for National Liberation [DMNL] secular left Egyptian activists had been supportive of the nationalist Free Officers military group that opposed British imperialism.

As Selma Botman’s Egypt from Independence to Revolution, 1919-1952 observed:

Nasser himself was the main actor of this scheme…

Yet after the apparently CIA-supported July 23, 1952, military coup by Nasser’s Free Officers overthrew the UK puppet regime and forced Egyptian King Farouk to go into exile on July 26, 1952, “the whole of DMNL’s printing department was arrested by Nasser, then a leader of the Revolutionary Command Council,” according to Egypt from Independence to Revolution, 1919-1952.

As the same book also recalled, “this was Nasser’s abrupt way of saying that the…relationship between the Free Officers and the communists was over” and “it demonstrated to the” Egyptian “left that the Free Officers’ organization was fearful of the communists.” The DMNL then “announced that the Officers had ceded to the pressure of” U.S. “imperialism and were no longer allies.”

As Lloyd Gardner’s The Road To Tahir Square noted, “policy statements prepared by [Kermit] Roosevelt [of the CIA] for Nasser to deliver were often represented on Egyptian presidential letterhead with scarcely any changes…”

After troops suppressed a strike by Egyptian workers, two labor leaders were hung.

But even after 500 troops of Nasser’s RCC were ordered to suppress a strike by Egyptian workers at the Misr Fine Spinning and Weaving Company in Kafr al-Dawwwar on August 12, 1952 — and the new RCC government subsequently hanged Egyptian labor leader Mustafa Khamees and a worker named Muhammad Abdel Rahman al-Baqri — the DMNL did not formally “break with the Free Officers until January 1953 when political parties were abolished” in Egypt by Nasser’s government, according to Egypt from Independence to Revolution, 1919-1952.

One reason the DMNL was reluctant to oppose Nasser’s nine-member Revolutionary Command Council until January 1953, was that on September 9, 1952, an agrarian reform law in Egypt had been enacted by Nasser’s Free Officers military regime. As Egypt from Independence to Revolution, 1919-1952 noted:

The law called for the limitation of ownership of up to 200 feddans of land with the provision that a family with 2 or more children could retain an additional 100 feddans. Every owner was to be indemnified in negotiable government bonds and the government was to be the sole distributor of expropriated land. The plan…succeeded in fragmenting the social, political, and economic power of the large landlords. The DMNL…applauded the program of land redistribution.

Jason Thompson’s A History of Egypt observed, however, that “according to one estimate,” this agrarian reform law “affected only 10 percent of Egypt’s arable land and 200,000 peasants;” and “therefore benefited just a small portion of the landless rural population” in Egypt.

Then, “after the removal of the royal family, the expropriation of the landlords and pashas, the silencing of the political parties, and the show of force against the working-class” in Egypt, “it became clear that the RCC had decided to take hold of exclusive authority in the country,” according to Egypt from Independence to Revolution, 1919-1952.