Nasser forces resignation of General Naguib; no mass Jewish emigration during this period. 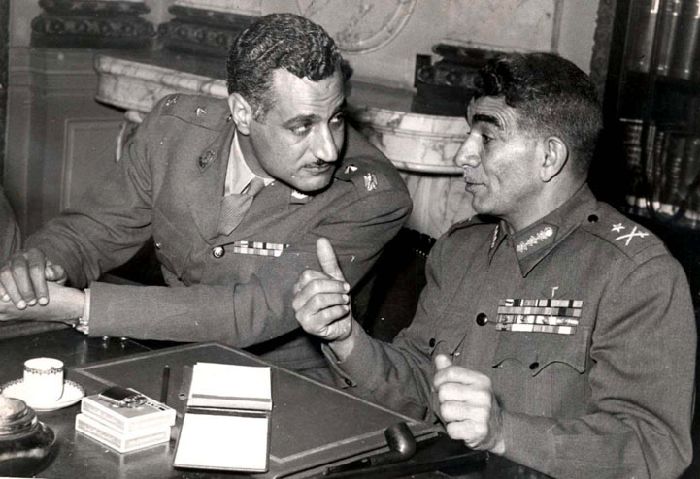 The following demands on Gamal Abdel Nasser’s military regime were then made by the National Democratic Front:

Egypt’s National Democratic Front also published the first issue of its newspaper al-Jabha (“The Front”) on June 12, 1953, in which it emphasized the following three political goals of the NDF:

But in November 1953, around 40 members of Egypt’s National Democratic Front were placed under arrest by Nasser’s new military regime.

Although Nasser was the leader of the Free Officers military group and the real power behind the scenes following the July 1952 military coup in Egypt, until early 1954 the official chairman of the RCC and the new regime’s official president and prime minister was an Egyptian General named Naguib.

But after Egyptian Gen. Mohammed Naguib openly criticized Nasser’s new regime for being too politically repressive, Naguib was pressured by Nasser and other RCC leaders to formally resign from his official posts as Egyptian president, prime minister, and RCC chairman in February 1954.; and Nasser, himself, was officially proclaimed both prime minister of Egypt and RCC chairman of the post-July 1952 military regime.

Naguib, however, was temporarily reinstated — following street protests in support of Naguib and parliamentary democracy — as the official RCC chairman and official Egyptian prime minister on March 8, 1954, after Nasser promised to convene a Constituent Assembly which would restore constitutional rule in Egypt.

But when Nasser and the other RCC leaders decided on March 29, 1954, not to hold a Constituent Assembly until January 1956, Naguib was pressured to permanently give up his official posts as RCC chairman and Egyptian Prime Minister to Nasser — following the suppression of pro-democracy student protests and the closing of Egyptian universities by Nasser’s military troops and police forces.

And by April 18, 1954, Nasser was now officially and publicly the most politically powerful leader in Egypt, even before he also eventually assumed the official position of Egyptian president in June 1956.

Despite the establishment of the State of Israel on Palestinian land in 1948 and the Egyptian military’s defeat in the 1948-49 Arab-Israeli War, the situation of Egyptians of Jewish religious background between late 1949 and 1954 had actually “slightly improved” and “Jewish emigration decreased,” according to the Encyclopedia Judaica.

As Joel Beinin’s The Dispersion of Egyptian Jewry noted, “in the early 1950s” Egyptians of Jewish background “freely practiced professions with high public visibility — journalism, law, medicine and finance,” and “in 1951, the London Jewish Chronicle reported that there seemed to be no move toward mass emigration” to Israel.

After the July 23, 1952 military coup that overthrew Egypt’s monarchical regime, “the new government was” also, initially, “favorably inclined toward Jews,” according to the Encyclopedia Judaica. But the same book also asserts that after Nasser replaced General Naguib as the official Egyptian prime minister and RCC chairman, “there was a change for the worse” in the situation of Egyptians of Jewish background who still chose to continue living in Egypt, even after the establishment of the State of Israel.