Nasser establishes a national party then moves to isolate Communists; his successor, Anwar Sadat, aligns Egypt with the West. 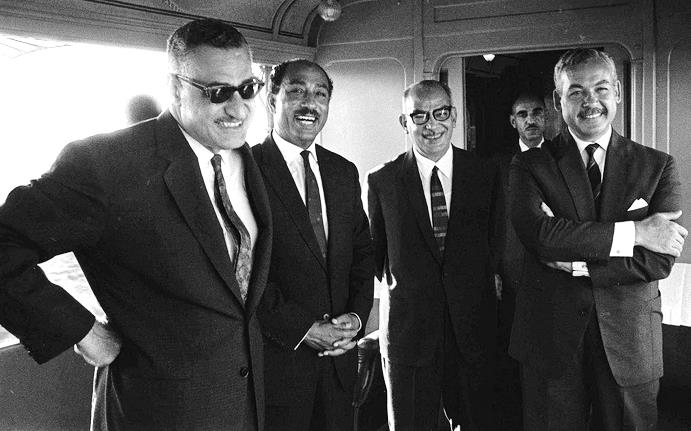 In 1962, in an effort “to absorb all progressive political forces” in the country “into the state system” of Egypt, Nasser’s military regime established the “Arab Socialist Union” as the one official political party, according to Tareq Y. Ismael and Rifa‘at El-Sa’id’s The Communist Movement in Egypt: 1920-1988.

Nasser’s regime released all imprisoned Egyptian communist activists from prison in April 1964, appointed a new General Secretariat of the Arab Socialist Union on December 13, 1964 ( in which six of its 15 members were Egyptian leftists), and created a secret unit within the Arab Socialist Union, “al-Tandhim al-Tali’” (which included some leading Egyptian communist activists) to lead the socialist transformation of Egypt.

Then activists from the United Communist Party of Egypt and Democratic Movement for National Liberation [DMNL] decided to formally dissolve their independent leftist political groups in 1965.

But according to The Communist Movement in Egypt: 1920-1988, “the Nasserized leadership of al-Tanhoni al-Tali” within the Arab Socialist Union “successfully isolated its Egyptian communist members” and “immobilized them,” and “sporadic attempts to reorganize the Communist parties” in Egypt under Nasser’s regime “were quickly squashed by the powerful intelligence and security agencies” of the military regime — that were collectively known as the mukhabarat, according to Jason Thompson’s A History of Egypt.

…Nasser accomplished only limited socialist measures… Nasser contained the communists, kept a watchful eye over them, and very cunningly co-opted them. He destroyed communism organizationally and prevented the Marxists from functioning as a viable political alternative…

Since Marxism was forced to operate underground it was given neither the chance to make its message nationally known nor to develop a measure of credibility which could have won it adherents… Nasser paralyzed the Marxists by repressing and co-opting them… And for the decade between 1965 and 1975 there was no independent Marxist political activity in Egypt.”

In his September 2009 Against The Current article, “Egypt’s Long Labor History,” Atef Said noted that, “while granting trade unions many rights, Nasser made sure these unions were designed in a hierarchical structure that put them under the control of ruling-party officials.”

In August 1965, “more than 220 Muslim Brothers were arrested” and the next year “seven, including Sayid Qutb,” the head of the Muslim Brotherhood,” were hanged for treason,”  according to A History of Egypt.

In his Holy Wars: The Rise of Islamic Fundamentalism, Dilip Hiro noted that “in 1964, as part of a general amnesty, Nasser” had “released the Brotherhood members” but “many of its leaders were reportedly implicated in three plots to assassinate Nasser,” and, “as a result, following the arrest of 1,000 Brothers and the trial of 365, the top leaders were executed in August 1966.”

Still, according to The Communist Movement in Egypt: 1920-1988, “as a result of the shake-up following Egypt’s disastrous military defeat in the 1967 Arab-Israeli war” in which between 15,000 and 20,000 Egyptian soldiers were killed (following Israel’s surprise attack and the subsequent Israeli military occupation of Egypt’s Sinai Peninsula, Syria’s Golan Heights territory, the Gaza Strip, the West Bank, and East Jerusalem in June 1967), Egypt’s underground “communist movement was revitalized.”

When it became evident, following Nasser’s death on September 28, 1970, that his successor as head of Egypt’s military regime, Anwar Sadat, was now aligning his Egyptian government regime politically and militarily with the U.S. imperialist government, an underground communist party was again reestablished in Egypt in 1975.

…For most leftists the break with Sadat came…certainly after the 1973 war with Israel [in which about 8,000 Egyptian and over 2,000 Israeli troops were killed] brought him in close cooperation with the United States. By this time, Sadat’s… policies represented a clean break with the Nasserist tradition.

And Lloyd Gardner’s The Road To Tahir Square recalled:

[U.S. Secretary of State Henry] Kissinger…arrived in the Egyptian capital on Nov. 5, 1973 for his first meeting with Sadat… Sadat lost no time, in November [1973] and again at a second meeting in December [1973] in outlining his requests to “my friend Henry.” …He wanted to develop the country…as he had already discussed with…David Rockefeller.

He had one specific request for the immediate future: he wanted the United States to become responsible for his personal safety… Sadat’s special bodyguards were sent to the United States for training. A new police unit…was established in Cairo. A CIA employee called John Fiz, who could read and speak Arabic, was installed in the [Egyptian] presidential office and had the task of dealing with all matters regarding security…

According to The Rise of Egyptian Communism, 1939-1970, “ conditions were” thus “ripe for the revival of the Egyptian Communist Party…in 1975 when the earlier decision to disband the party was declared no longer correct,” and “the party was revived as an active, underground organization” at that time.

By the mid-1970s, under Sadat’s regime, “the number of millionaires” in Egypt “rose from 500 to 17,000 and an affluent middle class developed,” but “the condition of the urban poor and fellaheen” (peasants of Egypt) “worsened,” according to The Rough Guide To Egypt, and “some 5 million families” in Egypt subsisted on less than $30 a month, and one and a half million Egyptians migrated to work in the Gulf States,” according to the same book.

…Sadat’s economic policies widened the gap between the poor and the rich by causing sharp increases in foods and rents, and by delivering a grievance blow to local industry with imports of cheap foreign goods. Between 1964-5 and 1976 the share of the middle 30 percent of the Egyptian population halved: from 40.2 percent of the gross domestic product to 21.52 percent. The corresponding figures for the lowest 60 percent were 28.7 percent and 19.93 percent. In contrast the top 10 percent nearly doubled their income: from 31.9 percent to 58.55 percent. The new rich flaunted their affluence…

Prior to the reestablishment of an underground party of Egyptian communist activists on May 1, 1975, strong evidence of mass dissatisfaction by Egyptian workers with the U.S. government-aligned Sadat regime’s economic policies appeared. As The Communist Movement in Egypt: 1920-1988 recalled, “on Jan 1, 1975 a workers’ strike took place in Helwan, Egypt’s major industrial center,” and “it quickly spread to Cairo, where demonstrations in the Bab-Alouq had turned violent.”

In response to these protests Sadat’s military regime “arrested about 500” Egyptian “communists, leftists and Nasserists, including members of the underground leftist Jama’al-Bila-Isim” group “which produced al-Intesar and the Ahmed ‘Urabi al-Missri’” newspapers.

During the mid-1970s, Sadat’s regime also apparently “used the Islamists to deal with those it regarded, at the time, as its main enemies — the left,” and “treated the reformist wing of the Islamist movements — grouped around the monthly magazine al-Dawa and on the university campuses by the Islamic Associations — with benevolence, as the Islamicists purged the universities of anything that smelled of Nasserism or Communism,” according to a 1994 article by Chris Harman.

In addition, according to Holy Wars: The Rise of Islamic Fundamentalism:

In May 1971 Sadat carried out a “corrective” coup against the left-leaning Ali-Sabri group in the ruling Arab Socialist Union, and actively encouraged Islamic sentiment and groups as a counterweight to the leftist influence. He directed General Abdul Munim Amin to establish about 1,000 Islamic Associations in universities and factories with the sole objective of combating…Marxism…Muslim Brotherhood exiles from Saudi Arabia and elsewhere began returning to Egypt.

During this same 1962-1976 period the number of Egyptians of Jewish background still living in Egypt continued to decrease. By 1967 only 3,000 Egyptian Jews still lived in Egypt. And, following the June 1967 attack on Egypt by the Israeli war machine, “the few remaining Jewish officials holding public posts” in Egypt “were discharged and hundreds of Jews” in Egypt were arrested, including “the chief rabbi of Egypt, R. Hayyim Duwayk, and the rabbi of Alexandria,” according to the Encyclopedia Judaica.

After being released, the detained Egyptians of Jewish background, as well as those Egyptian Jews who hadn’t been detained, were permitted to emigrate from Egypt. By 1970, fewer than 1,000 Egyptian Jews still lived in Egypt, and by 1971 only about 400 remained.