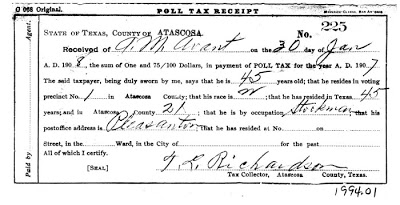 [This is the third section of Part 9 of Bob Feldman’s Rag Blog series on the hidden history of Texas.]

Between 1900 and 1910, in an effort to make it more difficult for dissatisfied African-American and poor white small farmers in Texas to express their discontent and their desire for radical democratic political and economic change, politicians intensified their efforts to more permanently disenfranchise African-American voters in the state and to create a poll tax in Texas.

White efforts to disenfranchise Negroes also stimulated the decline in the number of black voters by 1906. Negroes formed majorities in 14 counties along the coast, in the Brazos River Valley, and in Northeast Texas . They constituted 40 to 50 percent of the population in 13 other East Texas counties. Black majorities on the local level often elected Negroes to positions such as alderman, county commissioner, justice of the peace, county treasurer, tax assessor, and constable…

The white primary… spread rapidly across East Texas in the late 1890s and early 1900s…The state Democratic executive committee in 1904 suggested white primaries to all county committees which generally accepted the idea… The legislature in 1902 passed a constitutional amendment allowing a poll tax for voting. Populists, Mexican-Americans, labor unions, and some Anglo papers opposed it… The amendment passed by 2 to 1 margin, with the support of most whites…

According to Merline Pitre’s In Struggle Against Jim Crow, “the Terrell Election Bills… in 1902, 1903, and 1905, respectively… provided for a poll tax requirement for voting, a first and second primary, and a voter declaration of party membership…”

And “the Terrell Election Bill of 1905, designed to disenfranchise blacks, laid the foundation for the white Democratic primary by giving the party’s executive committee the right to determine eligibility for party membership and by making it a misdemeanor to pay poll taxes for blacks.”

According to Black Texans, “the decline in Negro voter participation from about 100,000 in the 1890’s to approximately 5,000 in 1906 suggests the effectiveness of the white primary, the poll tax, and the `lily white’ thrust in the Republic party” — in which “division between black leaders and white control of federal patronage” had, by 1906, also “opened the way to increasing white dominance of the Republican party” in Texas, as “`lily whites’ returned to the fold” of the Texas GOP.

According to the book, “the poll tax, the Democratic white primary, and white Republican leaders combined to keep most black Texans outside the political arena and to allow little voice to those who entered it from 1904 to 1944.”

In 1900, 63 percent of employed African-Americans in Texas still “continued to labor at various forms of agriculture” and “landowners formed 31 percent of the Negro farmers, with 69 percent sharecroppers and tenants — compared to 50 percent among white farmers,” according to Black Texans.

The same book also recalled that, in 1900, 28 percent of all employed African-Americans in Texas worked as “servants, laundresses, nurses and mid-wives, restaurant and saloon keepers, hair dressers, and barbers,” and that “by 1900 no major city” in Texas yet “claimed more than six Negro doctors,” although there were then still 23 African-American-owned weekly newspapers in Texas at that time.

And not surprisingly, given the increasing level of institutionalized and legalized white supremacy and racism that developed in Texas between 1890 and 1920, “the vast majority of Negroes in Texas found it impossible to overcome a combination of economic and racial problems which kept them at the level of sharecropping and unskilled labor as the 20th century began.”

“Black people who had been at least voters and laborers in the post-Reconstruction period found themselves virtual outsiders in Texas society of the early 20th century,” according to Black Texans.