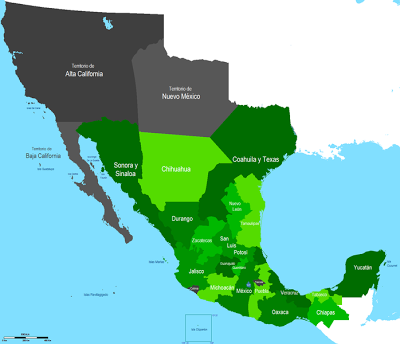 Mexico in 1825, including the state of Coahuila y Tejas. Image from Wikimedia Commons.

[This is the third installment of Bob Feldman’s new Rag Blog series on the hidden history of Texas.]

Article 15 of the Coahuila y Tejas State Constitution of 1827 stated that “No one shall be born a slave, and after six months the introduction of slaves under any pretext” in Texas “shall not be permitted.” And on Sept. 15, 1829, Mexican President Vicente Guerrero issued a decree that emancipated all slaves within the Republic of Mexico.

On Dec. 2, 1829, however, the Anglo settlers who lived in the Mexican state of Coahuila y Tejas and owned more than 1,000 African-American slaves, were then legally allowed to ignore Mexican President Guerrero’s Sept. 15, 1829 emancipation decree and to continue to redefine their imported slaves as “indentured servants,” in order to evade the 1824 Mexican law that prohibited the further importation of slaves into Mexico.

But on April 6, 1830 Mexico’s Congress passed another law which more strictly prohibited importation of more slaves into Texas under any guise by the Anglo settlers.

So the Mexican government decided it would no longer allow more Anglo settler-colonists — who were mostly into establishing an economic system in Texas based on slave labor and exporting cotton — to immigrate to Mexico. As a result, the Mexican Congress’s Law of April 6, 1830 also prohibited any further immigration into Mexico’s Coahuila y Tejas state by settlers from U.S. territory. In addition, this law also imposed new customs duties on imports and exports from Mexico that financially hurt the Anglo settlers who were involved in exporting cotton from Texas and importing other goods to Texas.

Since the border between the United States and the Mexican state of Coahuila y Tejas was too long for the Mexican Army to guard completely and secure effectively, Anglo settlers continued to enter Mexico in the early 1830s, as “illegal aliens,” and by 1834, the number of white Anglo settlers in Texas had jumped to 20,700, while the number of Spanish-speaking “Tejano” residents within the Texas region of Coahuila y Tejas was still only 4,000.

After some of the Anglo settlers in Coahuila y Tejas held a convention in 1833 — which asked for both repeal of the Mexican Congress’s Law of April 6, 1830 (that prohibited further immigration of settlers from the United States) and for Texas to become a separate Mexican state and no longer just a region of the predominantly Spanish-speaking state of Coahuila y Tejas — the 1830 law was repealed by the Mexican government in late 1834.

In addition, the Mexican government then “offered considerable self-government at the local level” to the Anglo settlers in Coahuila y Tejas, and “during the early 1830s Anglos in Texas received important concessions such as trial by jury and use of the English language” from the Mexican federal government, according to Randolph Campbell’s Gone To Texas.

Yet when the demand for a separate, predominantly white Anglo state of Texas within the federal republic of Mexico was rejected by the Mexican government after Stephen F. Austin presented it in Mexico City, Austin apparently then wrote an inflammatory letter in which he advised the Anglo settlers in Texas to form a separate state “even though the general government” of Mexico “refuses to consent.” This inflammatory letter, however, was intercepted by Mexican government authorities; and Austin was then imprisoned by the Mexican authorities for a year.

According to Gone To Texas, among the reasons the predominantly white Anglo settlers in Coahuila y Tejas wanted a separate state for themselves within Mexico was that “most Anglos definitely thought themselves inherently superior to Mexicans” and “most Anglos at least accepted slavery, whereas Mexican officials threatened to destroy the institution.” In his 1996 book Black Texans: A History of African Americans in Texas, Texas Tech University Professor of History Alwyn Barr also observed:

Mexicans generally accepted black people, especially mulattos, more readily than did the… Anglo population… Because of the favorable legal and social conditions, Benjamin Lundy, a white abolitionist, and Nicholas Drouett, a mulatto who had retired as an officer in the Mexican army, sought permission to establish a colony of free blacks from the United States during the 1830s. The Mexican government reacted favorably, but most whites in the United States and Texas opposed the project as an impediment to their westward movement…

White Texans, overwhelmingly southern in background, brought with them favorable views of slavery and unfavorable views of black people… Mexican opposition to the importation of slaves did slow Anglo immigration and act as a major source of discontent prior to the Texas Revolution in 1836…

So in 1835 the predominantly white Anglo settlers armed themselves and began organizing for an armed rebellion against Mexican government rule in Texas. A number of Spanish-speaking Mexican settlers in Texas (like a land speculator with the Galveston Bay and Texas Land Company named Lorenzo de Zavala) supported the armed rebel Anglos.

And, according to the Texas State Historical Association’s Texas Almanac website, an East Texas merchant of Jewish background (and a friend of former Tennessee Governor Sam Houston) named Adolphus Sterne “became a principal source of financial backing for the Texas Revolution” of 1835-1836.