Bob Feldman : Labor Unions and the Communist Party Are Active in Texas, 1930-1940 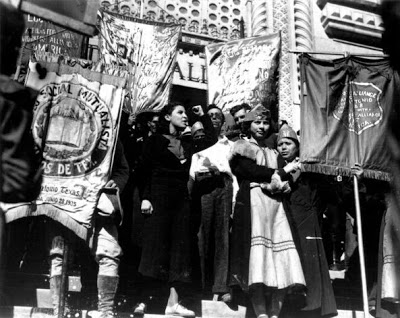 Emma Tenayuca, leader of the pecan shellers’ strike at the age of 21, stands on the steps of San Antonio’s City Hall in 1938. Tenayuca was also active in the Communist Party in Texas. Image from the Institute of Texan Cultures.
The hidden history of Texas

[This is the third section of Part 11 of Bob Feldman’s Rag Blog series on the hidden history of Texas.]

Although “throughout the 1930s, the Communist Party in Texas (Houston included) remained small and ineffectual, with no more than 200 members at any given time,” according to Merline Pitre’s In Struggle Against Jim Crow, “by the fall of 1935, the Texas Communist Party was firmly established in Houston, and literature bearing its logo was passed out everywhere along the Gulf Coast, especially where strikes occurred.”

Editorial writers at Austin had formed the first Texas American Newspaper Guild by January 1934. In May [1934] it was reported that the first contract had been negotiated with the Austin American-Statesman and “the three Austin newspapers report 100 percent membership.”…

The ILGWU organized Petrillo and Company in Dallas peacefully, but three other firms there had signed agreements only after bitter strikes following the ILGWU’s campaign in the fall of 1936. The Ladies’ Garment Workers had about 3,100 southern members in 1939, 2,100 of whom were in Texas… The Sinclair [oil workers union] local in Houston, Texas had 1,157 members in 1939 — the largest local in the South. The local was the main base for organization on the Gulf Coast, and Sinclair was the only major refinery to sign a national agreement with the oil workers.

The first major oil workers’ local in the Gulf Coast area was Local 227 at Sinclair in Houston… The Pasadena local had an average membership of 677 during 1939. The oil workers established Local 1229 for Negroes and Local 243 for whites at the Magnolia refinery at Beaumont, Texas, in 1933, but they did not win bargaining rights… Local 23 at Port Arthur, Texas, was reorganized in 1933 and attempted to win contracts from Gulf and Texaco, but the oil workers’ activities in Port Arthur were impeded by conflicts between craft and industrial unions within the refineries… The oil workers did not succeed in winning an election at the important Texas Company and Gulf refineries until 1942…

Members of the International Longshoremen’s Union [ILA] also held a strike on October 10, 1935; and “in 1938, some 12,000 pecan shellers went on strike, creating the largest labor stoppage in Texas history” and won pay increases as a result of this strike, according to Randolph Campbell’s Gone To Texas. The www.labordallas.org website described what provoked the 1938 Pecan Shellers Strike in San Antonio, Texas and what happened during the strike before a settlement was reached:

Julius Seligman hired 12,000 low-wage Mexican-Americans who labored 60 or more hours a week for an average of $2.50 per week, or about 4 cents an hour. On Feb. 1, 1938, Seligman ordered a 20 percent wage cut. The workers organized and went on strike… Police tear gassed and clubbed peaceful picketers. They invaded homes and threatened to gas people if they did not return to work.

The same Texas Labor History web site also recalled that “Emma Tenayuca of San Antonio… was the most prominent public leader of the pecan shellers’ strike that was called the most important labor action in the Southwest up to that time;” and that, coincidentally, “Tenayuca was a member of the Communist Party (CPUSA).”

In response to protests by farmers, street demonstrations of unemployed workers, and the labor movement activism of the early 1930s around the United States, the Democratic Roosevelt Administration also created federal public programs between 1933 and 1940 like the Works Progress Administration [WPA] — which provided jobs for “some 600,000… Texans without regard to gender or race” between 1935 and 1943, according to Gone To Texas.

Also, in Austin, the Public Works Administration [PWA] “pumped millions of dollars into Austin’s sagging economy and generated thousands of jobs,” according to David Humphrey’s Austin: An Illustrated History. The same book also noted that “by 1936 the PWA would provide at least $6 million in grants and loans for Austin, more than for any other Texas city during the same period;” and “the University of Texas also wangled several million dollars out of the PWA, including money for dormitories and a 27-story tower.”

And another reason Lyndon Johnson was able to first get elected to Congress in 1937 may have been that he had previously gained some local popularity with Austin voters — by  helping to provide some federally-funded work opportunities for young people in his appointed position in the New Deal’s National Youth Administration.

1 Response to Bob Feldman : Labor Unions and the Communist Party Are Active in Texas, 1930-1940