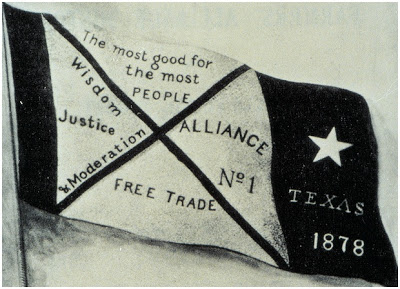 Flag of the Texas Farmers Alliance. Image from HHS AP US History.
The hidden history of Texas

[This is Part 8 of Bob Feldman’s Rag Blog series on the hidden history of Texas.]

Although the number of Texas residents who were of African descent increased from 253,000 to 488,000 during these same 20 years, the percentage of all Texas residents who were African-American decreased from 32 to 22 percent during this period. And by 1890, 125,000 people of German descent now also lived in Texas. The number of people of Mexican descent then living in Texas was only 105,000.

The number of Native Americans who were able to live in Texas, however, continued to decrease between 1870 and 1890 as U.S. government “military pressure on the Indians began to intensify during the early 1870s,” and “white hunters started to inflict an equally serious blow by destroying the great buffalo herds,” according to Randolph Campbell’s Gone To Texas.

Following the summer of 1874 incursion of 5,000 U.S. Army troops, during the Red River War, into the areas of Texas where Native American tribes like the Comanche and Kiowa tribes still lived, “the way for Texans to cover the prairies and Panhandle with cattle and cowboys” was opened, and “by the mid-1870s, the success of trailing cattle to market, combined with the elimination of Indians and buffaloes from northwestern Texas, encouraged the establishment of ranches in that region,” according to the same book.

By 1890, absentee foreign investors from the UK had helped quickly transform Texas’s cattle ranching industry into one dominated by corporate ranchers who paid their Texas cowboys and ranch workers low wages. So, not surprisingly, in 1883 “a group of cowboys” had “demanded higher wages” and gone “on strike against five ranches,” according to Gone To Texas.

But, although “the Cowboy Strike” involved “as many as 300 men” and “lasted more than two months,” it failed to win higher wages primarily because the corporate “ranchers had no trouble hiring replacements,” according to the same book.

After Gould’s Texas & Pacific railroad executives refused to negotiate with its Knights of Labor-led strikers and hired strikebreakers, Texas Rangers and Texas state militia were ordered to break the strike by state government officials. In several Texas cities during the 1880s, Knights of Labor union locals also “accepted black members,” and an African-American worker named David Black also served on the Knights of Labor’s state executive board during the 1880s, according to Alwyn Barr’s Black Texans.

Between 1876 and 1890 more and more of the people who lived in rural Texas did not own the land on which they farmed. In the 1880s, for example, “the number of Texas farms worked by landless tenants rose by more than 30,000,” according to Gone To Texas, and “most farmed as either share tenants or sharecroppers paying rent with portions of the crop they produced.”

The same book noted that “by 1890, 42 percent of all Texas farms were worked by tenants,” the percentage “continued to rise year by year,” and “Texas farmers by the tens of thousands seemed doomed to live endlessly in near poverty — working someone else’s land.”

So in response to the increasing impoverishment and loss of land ownership experienced by Texas farmers between 1876 and 1890, many Texas farmers, not surprisingly, became politically active in farmer protest groups like the Grange (during the 1870s) and the Texas Farmers Alliance (during the 1880s).

According to John Hicks’ The Populist Revolt: A History of the Farmer’s Alliance and the People’s Party, during the 1880s the Texas Farmers Alliance “soon achieved considerable prominence throughout central and northern Texas,” and “by December 1885, the claim was made that the Alliance had about 50,000 members scattered among not less than 1,200 locals.”

At its 1886 state meeting in Cleburne, the Texas Farmers Alliance adopted resolutions which “put the Alliance on record as favoring the higher taxation of lands held for speculative purposes, the prohibition of alien landownership, the prevention of dealing in futures, so far as agricultural products were concerned, more adequate taxation of the railways, new issues of paper money” and “an interstate commerce law.”

As Gone To Texas recalled, “by 1890… many Texas farmers… thought that their desperate situation required drastic steps” and “a good many Texans had found the `New South’ an empty promise and wanted something better.”

Between 1876 and 1890, white supremacist racist Democratic Party-oriented groups in Texas also apparently began to use both violent and legal means to deny many African-Americans their democratic right to vote and participate as equals in Texas state electoral politics. As Black Texans recalled:

In the late 1870s white men’s parties or intimidation of Negro voters developed in the town of Navasota and in Leon, Montgomery, Colorado, DeWitt, and Washington counties. Similar events occurred in Waller, Harris, Washington, Matagorda, and Wharton counties in the 1880s.

During the 1880s, around 90 percent of all members of Texas’s Republican Party were African-Americans, and after the Greenback insurgent third party of the 1870s began organizing in Texas in 1877, “black delegates appeared in the earliest third-party meetings and represented 70 Greenback clubs for Negroes at the state convention in 1878,” according to Black Texans.

The same book also noted that “in addition to their economic program, Greenbackers appealed for black votes by calling for a better public school system” in Texas during the late 1870s; and the nine African-American GOP or Greenback Party candidates who were elected to the Texas state legislature during the late 1870s also (at that time) “helped defeat a poll tax measure when the Democratic majority divided on the issue.”