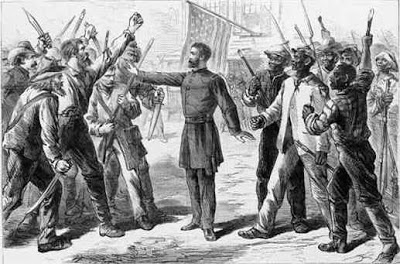 The Freedman’s Bureau in Texas. Image from Afrotexan.com.
The hidden history of Texas

[This is the first section of Part 7 of Bob Feldman’s Rag Blog series on the hidden history of Texas.]

Just before the end of the U.S. Civil War in 1865, “the Confederate troops in Texas got out of hand and began rebelling and looting [in] towns like Houston [which] were burned,” according to W.E.B. Du Bois’s Black Reconstruction.

But by mid-June 1865, General Gordon Granger entered Texas and on June 19, 1865, an Emancipation Proclamation was announced by General Granger that freed most of the 250,000 African-Americans who then lived in Texas from being legally defined as the property and slaves of their mostly white Anglo masters.

Yet despite the presence of Union troops in Texas, “between 1865 and 1868, 468 freedmen met violent deaths — 90 percent at the hands of white men” in Texas (while “only about 1 percent of the 509 whites killed” during the same period in Texas were killed by black men), according to Alwyn Barr’s Black Texans.

According to Randolph Campbell’s Gone To Texas, “from 1865 to 1867 Presidential Reconstruction in Texas created state and local governments [in Texas] controlled by a conservative combination of prewar Unionists and former secessionists, with the latter holding the upper hand.”

So, not surprisingly, a black code was enacted during this period which “forbade inter-marriage, voting, holding public office, serving on juries, or testifying in cases where Negroes were not concerned” by Texas’s African-American residents, according to Black Reconstruction.

Federal troops entered Austin on July 25, 1865, and between 100 and 200 U.S. government troops remained stationed in Austin until President Grant ordered their withdrawal in March 1870.

But following the February 1868 election of 90 delegates to the reconstructed State Constitutional Convention (which included nine progressive African-American delegates and a white progressive majority of delegates — as well as a white reactionary minority of 12 delegates) Texas’s new 1869 state constitution officially abolished slavery, established free public schools, and “decreed that the receipts from public lands should go to the school fund, besides other revenues,” according to Black Reconstruction.

The same book also noted that after another election in 1869 (in which local eligible Anglo, Mexican-American, and African-American male voters participated) to choose representatives to Texas’s new state legislature, “E.J. Davis… marshaled the Negro vote [and] was elected Governor by a small plurality,” and “in the ensuing legislature, the Fourteenth and Fifteenth Amendments [of the U.S. Constitution, which legally prohibited the abridgement of African-American citizenship rights and voting rights in former Confederate states like Texas] were adopted almost without opposition, and [on] Mar. 30, 1870, the representatives of Texas were admitted to Congress.”

In addition, between the late 1860s and the fraudulent election of 1873 (in which African-American supporters of Texas Governor E.J. Davis were “in many communities ordered to keep away from the polling places” by the white supremacist Democrats who had previously supported the Confederacy, “while white men under age… voted”), many African-Americans in Texas held public office and “there were Negroes in the state militias and the various police forces” in Texas, according to Black Reconstruction. 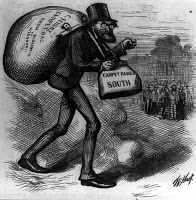 After Texas Governor Davis was defeated in the fraudulent 1873 election, however, the same type of rich white Anglo landowning Democrats who controlled the Texas state legislature in Austin before the Civil War regained control of the state government, and a new state constitution was drawn up by an 1875 Texas Constitutional Convention, which went into effect on April 18, 1876, that allowed institutionalized racism to develop in Texas again.

In addition, factually incorrect versions of what actually happened politically inside Texas between 1865 and 1874 were promoted by some U.S. academic historians until the second half of the 20th century. As Gone To Texas, recalled:

The traditional interpretation of Reconstruction is replete with factual errors. For example, claims that Carpetbaggers ran Reconstruction in Texas and that the era ruined the fortunes of a great many whites are completely unfounded. Carpetbaggers held fewer than one-quarter of the…major offices in state and county government between 1867 and 1874.

Instead, a majority of the men who led Texas during Congressional Reconstruction were…natives of the South who supported the Republican Party… It is clear that most of the wealthy did not have to relinquish their position in society between 1865 and 1876. They lost their slaves…but they did not lose their lands or other forms of property.