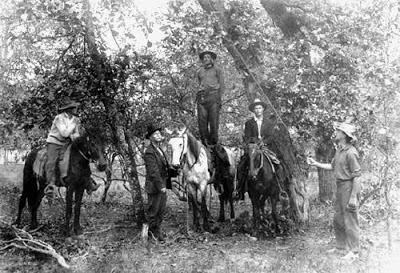 Unidentified African-American man lynched in Texas, 1910. Image from Legends of America.
The hidden history of Texas

[This is the first section of Part 9 of Bob Feldman’s Rag Blog series on the hidden history of Texas.]

After 1900, “’immigrants’ from Mexico began to arrive in significant numbers for the first time since the Texas Revolution” in 1836, but “Texans of Mexican descent, `immigrants’ and native-born combined,” still “amounted to only about 10 percent of the state’s population in 1920,” according to Randolph Campbell’s Gone To Texas. According to the same book, in 1920 “most new arrivals” from Mexico “lived in South Texas and El Paso.”

By 1920, the total value of crops produced by farmers and of cattle raised on ranches in Texas was more than the total value of crops or cattle raised in any other state in the USA. Yet between 1890 and 1920 racial “segregation… became commonplace,” as well as “disfranchisement” of African-Americans, and “physical intimidation occurred regularly and too often ended in the horror of lynching,” according to Gone To Texas.

The same book recalled that “between 1890 and 1920, Texans lynched 309 men, 249 (81 percent) of whom were black,” and “lynching generally followed the accusation of an assault on a white woman and involved sickening torture as well as hanging and burning the victim.”

According to Alwyn Barr’s Black Texans, “between 300 and 500 Negroes met deaths by lynching in the late 19th century in Texas,” although after an anti-lynching law was passed by the Texas state legislature in 1897, “the rate of lynching declined from 18 per year in the 1890s to 10 per year from 1899 to 1903.”

Texas Southern University Professor of History Merline Pitre’s 1999 book, In Struggle Against Jim Crow: Lulu B. White and the NAACP, 1900-1957, also recalled that “at the dawn of the twentieth century, East Texas was notorious for lynching and was considered one of the worst regions in the state, leading the state in 1908 with 24 deaths.” The book said that in 1910 “more than 100 blacks had been lynched in the Lone Star State,” with most of the lynchings still happening in East Texas — which ranked third of all regions of the USA in which lynchings took place at that time.

In 1891, the Texas state legislature made racial segregation on railways in Texas mandatory and “in 1903 several Texas cities… joined a southern trend that required separate seating on streetcars,” according to Black Texans. In response, “Black leaders [in Texas] protested first before organizing boycotts which lasted several months in Houston and San Antonio.” The Texas legislature “required streetcar segregation on a statewide basis in 1907,” according to the same book.

In the view of Texas Tech University Professor of History Alwyn Barr, “this act, which brought transportation segregation to the local level where it affected large numbers of Negroes, marked a crucial stage in the development of segregation in Texas.” By 1909, railroad station waiting rooms and amusement parks in Texas were all required to be racially segregated by the Texas legislature.

According to David Humphrey’s Austin: An Illustrated History, “at the opening of the twentieth century, separation of blacks and whites already characterized many aspects of Austin’s life.” “Blacks and whites attended separate public schools as mandated by Texas law and worshipped at separate churches,” the University of Texas “admitted only whites” and “many a prominent gathering place catered to whites only, such as Scholz Beer Gardens.”

The same book also recalled that “the first quarter of the twentieth century witnessed a hardening of the lines” of racial “separation” in Austin, and that in 1906 the Austin “city council passed an ordinance requiring separate compartments for blacks and whites on streetcars.” In 1906, according to Austin: An Illustrated History, Austin’s African-American community responded in the following way:

The Black community reacted angrily. Seeking repeal of the ordinance before it went into effect in 90 days, blacks organized a streetcar boycott that was almost completely effective within three weeks. Black domestics informed employers that they would resign rather than ride segregated trolleys. Several blacks started hack lines that provided boycotters with alternate transportation.

But the streetcar boycott apparently ended after Austin police “threatened to arrest `agitators’ who dissuaded blacks from riding the [now-segregated] streetcars,” according to the same book.

Although African-Americans had lived in “virtually every city neighborhood” in Austin in the early 1880s, “by 1910 black homes [in Austin] had become more concentrated on the eastern side of the city” and “other neighborhoods grew more consciously segregated,” according to Austin: An Illustrated History. The same book also noted that “Monroe Shipe openly promoted [Austin’s] Hyde Park as a residential community `Exclusively For White People,’ while deed restrictions that prohibited blacks from renting or buying property provided a… decisive means to achieve the same goal.”