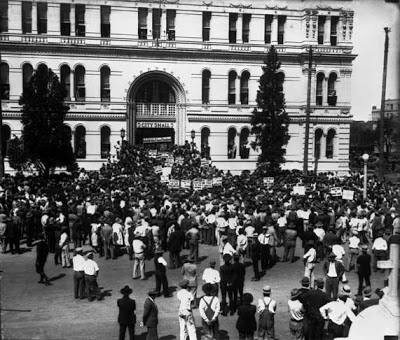 [This is the first section of Part 11 of Bob Feldman’s Rag Blog series on the hidden history of Texas.]

The oil industry of Texas continued to produce a lot of wealth for out-of-state Eastern investors, some local Texas businessmen, politicians, and investors, and the “non-profit” University of Texas during the Great Depression of the 1930s. But for most people who lived in Texas as farmers or workers between 1930 and 1940, economic survival continued to be difficult.

In an essay, “Women and Work During the Great Depression in Texas,” that appeared in the 2002 book that Donald Willett and Stephen Curley edited, titled Invisible Texans: Women and Minorities in Texas History, Baylor University Oral History Program Director Rebecca Sharpless described what life was like for most people who lived in Texas between 1930 and 1940:

Cotton families made up most of the rural population in Texas… In 1932, cotton prices hit a low of 5 cents a pound… Farmers spent more money raising their crops than they received for the sale. West Texans, furthermore, endured the miserable conditions known as the Dust Bowl. Between 1933 and 1936, drought scorched the land… Only the fortunate minority had running water in the house. Most rural families used outdoor toilets, known as privies… Most rural and town women still cooked on wood stoves… .

The majority of Texas farmers worked land owned by someone else… Many landowners… turned their tenants off the land… Between 1930 and 1940 the number of tenants in some parts of the state dropped by half… Many unemployed farmers were forced to go on government relief… By mid-1932, an estimated 400,000 Texans were out of work…

During the 1930s, more than half a million Texas women worked for wages. In urban areas, this group encompassed about 25 percent of Anglo women, about 25 percent of Mexican women, and 55 percent of African-American women… In 1932, researchers for the Women’s Bureau of the U.S. government found that women in Texas industries worked for the lowest wages in the nation… More than three-quarters of employed African-American women in Texas worked as domestic servants throughout the 1930s.

According to Randolph Campbell’s Gone To Texas:

Most of the Latino people of Mexican descent in Texas who left the state during the 1930s moved to Mexico, and “many left because they were denied access to government relief programs or fell victim to an intense federal repatriation program,” according to the same book.

Around 20,000 African-Americans who lived in Texas also left the state between 1930 and 1940; and “as late as 1937 Negroes formed 25 percent of all unemployed persons” in Texas, though they only “composed 14 percent” of the state’s population, according to Alwyn Barr’s Black Texans.

In San Antonio, most of the white Anglo women who had jobs between 1930 and 1940 either worked in shops as sales clerks or in offices as clerical workers, while most of the Latina women of Mexican descent who had jobs worked in light industries, the food canning industry, garment factories, cigar rolling firms, pecan shelling firms or as seamstresses.

Although Houston’s unemployment rate in January 1931 was around 23 percent, “Austin, cushioned by the presence of state government employees and the University of Texas probably suffered the least among major cities” in Texas, according to Gone To Texas. So, not surprisingly, during the 1930s the number of people who lived in Austin increased by 66 percent; and by 1940, 88,000 people now resided in Austin. As the “Women and Work During the Great Depression in Texas ” essay recalled:

But “black women could find jobs only in laundries, domestic service, and sometimes hotels as `scrub women’ or chamber maids,” “Mexican women could gain employment in canning factories, domestic services, laundries, and occasionally as seamstresses in dry goods stores,” and “the supply of rural women wanting work became so great that the local telephone service began to requiring applicants to have a high school diploma and a year of residence in Austin,” according to the same essay.