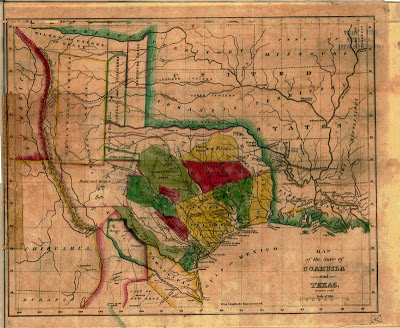 Map of the State of Coahuila and Texas, 1836. Image from the Texas State Library and Archives Commission.

[This is the first installment of Bob Feldman’s new Rag Blog series on the hidden history of Texas.]

The general populace knows a lot about Texas politics and history, yet most people in the United States who didn’t grow up in Texas and who never have lived in Texas probably know very little about the hidden history of Texas.

Prior to 1821, for example, people of Jewish religious background who wanted to openly practice Judaism were, at least in theory, not allowed to become residents of Texas because the Spanish authorities in Texas required people who lived in Texas to worship openly only as Catholics.

When Texas was part of the New Spain colony in North America under Spanish rule during the late 18th century, the legal status of women who owned property in Texas was actually better than it had been when the 13 U.S. colonies on North America’s East Coast were ruled by the UK prior to 1776.

So after Aug. 24, 1821, Texas would become part of the newly independent Empire of Mexico. And after the white Creole military commander of Vera Cruz, Antonio Lopez de Santa Anna, led a white Creole landowning elite-supported Mexican Army revolt in December 1822 which set up a federal republican form of government in Mexico in 1823, Texas now became a part of the Republic of Mexico’s state of Coahuila y Texas in 1824.

This entry was posted in Rag Bloggers and tagged Bob Feldman, Texas History. Bookmark the permalink.

4 Responses to Bob Feldman : The Hidden History of Texas