Bob Fitrakis and Harvey Wasserman : Will the GOP Steal the Election? 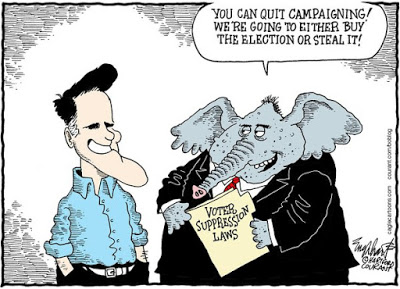 Would the Koch Brothers, Sheldon Adelson, the Chamber of Commerce, and their related billionaires spend tens of millions of dollars to win the White House but stop short of spending the relatively small amount it would take to flip the vote?

The Republican Party could steal the 2012 U.S. presidential election with relative ease.

Winning a fair and reliable electoral system can be achieved only with a massive grassroots upheaval.

The power of money is now enshrined by the infamous Citizens United decision. In at least 90% of our congressional races and at least 80% of our U.S. Senate races, the candidate who spends the most money wins.

From the presidency to the local level, our elections — and thus control of our government — are dominated by cash.

For more than a century, the ability of corporations and the super-rich to buy in directly has been legally constrained. But the concentration of media ownership in the hands of ever-fewer corporations has vastly enhanced their power.

Already in 2012, the tsunami of dollars pouring in from corporations and super-rich individuals has soared to entirely new levels. Even the floodgates opened by Citizens United can’t handle the flow. With its June decision denying Montana’s attempt to keep some spending restrictions in tact, the John Roberts U.S. Supreme Court has inaugurated an era in which virtually unrestrained “pay-to-play” money will redefine the electoral process. Republicans in the U.S. Senate have also blocked attempts to require that these campaign “donations” be made public.

It’s not hard to guess where this leads. The June 2012, recall election in Wisconsin saw at least eight times as much money being spent on protecting Republican governor Scott Walker as was spent to oust him.

Barack Obama has spent much of his presidency courting corporate interests. But he will be out-raised by the corporate/super-rich 1% backing Mitt Romney. A handful of high-profile billionaires will spend “whatever it takes” to put the GOP back into the White House. Just a dozen of them have already provided more than 70% of Romney’s early campaign budget.

Most of this corporate money is being used to persuade voters to oust Obama, which they may well decide to do. But U.S. history shows that some of it can also restrict the ability of Americans to vote. It can then “bend” the vote count in ways the public may not want.

Our nation’s history shows that given the same chance, the Democrats would gladly do the same to the Republicans. And it’s happened many times, especially in the Jim Crow south.

But in 2012, it will be primarily Republicans using gargantuan sums of corporate money to take control of the government from Democrats, and democracy be damned.

We are not writing this in support of Barack Obama or the Democratic Party. We are mystified by their unwillingness to fight for meaningful electoral reform. Both Al Gore and John Kerry were legitimately elected president, but neither was willing to fight for significant change, or even to discuss the issue. When we broke many of the major stories on the theft of Ohio 2004, it was the Democrats who most fiercely attacked us.

We’re continually asked why the Democrats have been willing since 2000 to sit back and let the GOP get away with this. Frankly, we have no answer.

But for us, the more important reality is that this electoral corruption dooms the ballot as an instrument of real democracy. A system this badly broken means a bipartisan oligarchy can always deny third and other grassroots parties the use of elections to challenge the status quo, in this case one increasingly defined by war, bigotry, injustice, moneyed privilege, and ecological suicide.

Thus it’s been a century since the last significant electoral challenges to the Democrat-Republican corporate domination of the political system.

The Populists were shattered in 1896 with a combination of cooption by William Jennings Bryan’s Democratic Party and election theft engineered by Mark Hanna’s Republicans. (Republican strategist Karl Rove, a serious student of the 1896 election, considers Mark Hanna to be one of his great heroes.)

The Socialists were co-opted and divided in 1916 by the Democrat Woodrow Wilson, who then crushed them in the most violent wave of physical repression ever imposed by a U.S. President on a mass movement that derived from the heart of America’s working public.

No third party has since risen up with enough real political clout to threaten corporate power through the electoral system. As long as our ballot box is corrupted and unaccountable, none will.

That one party could steal an election from the other means our democracy, if it could still be called that, is essentially in shambles.

Would the Koch Brothers, Sheldon Adelson, the Chamber of Commerce, and their related billionaires spend tens of millions of dollars to win the White House but stop short of spending the relatively small amount it would take to flip the vote?

Thankfully, we are citizens of a nation born with the bottom-up overthrow of the planet’s then-most powerful king. As believers in grassroots democracy, we know that the survival instinct is ultimately more powerful than the profit motive. When it comes to the basics, we have no doubt the power of the people will ultimately prevail.

For those working on the 2012 election, and for democracy in general, that will mean an extraordinary commitment to protecting the registered status of millions of Americans, getting them to the polls, guaranteeing their right to vote once there, and making sure there is an accurate vote count — electronic and otherwise — once those votes are cast.