Bolivia’s Evo Morales : Putting the Coca Back in Cola

The Andean nation’s indigenous people have long resented the U.S. beverage company for usurping the name of their sacred coca leaf. Now, they are aiming to take back their heritage. Recently, the government of Evo Morales announced that it would support a plan to produce a coca-based soft drink which would rival its fizzy American counterpart.

It’s still unclear whether the new drink will be promoted by a private company, a state enterprise, or some type of joint venture between the two. The new beverage will be called Coca Colla, in reference to age old history: in Bolivia, Quechua, Aymara, and other indigenous peoples descended from the Incas are known as collas.

In a move that will undoubtedly exasperate Coke, Bolivian officials say Coca Colla will feature a black swoosh and red label similar to the classic Coca-Cola insignia. Coca Colla reportedly has a black color, just like normal Coke, and could be sold on the market as early as April.

“Coca Cola robbed from us the name of our coca leaf and moreover has cornered the market all over the world,” says Julio Salazar, Secretary General of the Bolivian Coca Growers’ Federation and Senator from Evo Morales’ Movement Towards Socialism Party (known by its Spanish acronym MAS). “It is high time that the true owners of this natural resource benefit by industrializing our coca,” he added.

Bolivians would like to overturn the negative stigma attached to the coca leaf. Morales, an Aymara Indian, says that coca in its natural state does not harm human health, and that scientific research has demonstrated the plant to be “healthy.” When drug smugglers change coca into cocaine, Morales adds, they change the plant’s chemical composition.

While the Bolivian president condemns such practices, he also touts the commercial uses of coca leaf. Bolivia’s new constitution, drafted by the ruling MAS party, recognizes coca as Bolivia’s “cultural heritage, a natural and renewable resource of biodiversity in Bolivia and a factor of social cohesion” and adds that coca leaf is not a narcotic in its natural state.

Coca leaf, which was domesticated over 4,000 years ago, is usually chewed with a bitter wood-ash paste to bring out the stimulant properties which are mild and similar to caffeine or nicotine. In its pure form, coca serves to ward off hunger and counteracts the effects of high altitude. Many poor peasants earn their livelihoods from cultivation of the leaf, and coca has been used for millennia in cooking, folk remedies, and religious ceremonies.

Indeed, for Andean Indians coca leaf is closely tied to the spiritual world. Offerings to Pachamama, the Mother Earth, begin in August to scare away malevolent spirits of the dry season and to encourage a good harvest. Offerings consist of llama foetuses, sweets of various colors, coca leaf, and other herbs. The yatiri, or indigenous priest, burns the offerings in a bonfire while muttering prayers to the achachilas, Gods that inhabit the mountains. 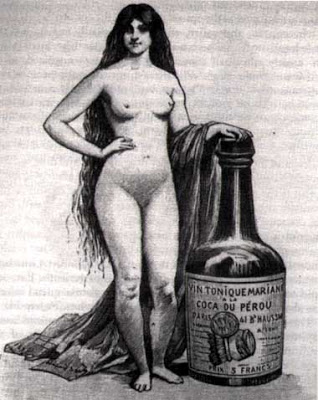 The restorative powers of coca wine

Though Coca Colla’s launch may have taken Coke’s CEO’s by surprise, it’s certainly not the first time that coca leaf has been incorporated in commercial drinks. When I was in La Paz researching my recent book Revolution! South America and the Rise of the New Left (Palgrave-Macmillan), I stopped by the city’s coca museum where I learned about Mariani, a coca wine. Launched in Europe in 1863, the wine was launched by Corsican chemist and entrepreneur Angelo Mariani. The businessman spawned imitators such as John Styth Pemberton, an Atlanta entrepreneur who launched his own coca wine. Later, the American created a syrup which served as the prototype for Coke.

After gathering information about the Inca and its love of coca, Mariani took up horticulture and began to grow the sacred Andean leaf in his backyard. Ingeniously, he sent samples of his new wine to famous people world wide in search of endorsements.

Mariani’s outreach paid off: the businessman received glowing testimonials from the likes of Emile Zola, Thomas Edison, Buffalo Bill Cody, and even U.S. President William McKinley, Queen Victoria and three Popes. In 1885, when Ulysses Grant was in his final death throes and suffering from throat cancer, he drank coca wine. Reportedly, the treatment helped soothe his pain.

“Vin Mariani is the restorer par excellence,” crowed Le Figaro newspaper in 1877. “It is the king of remedies against anemia… It is a tonic which increases the secretion of gastric juices, produces appetite… Vin Mariani has the rare advantage of stimulating both the muscular and cerebral activities.”

“Just how much of a kick did Mariani deliver?” asks Mark Prendergast, author of For God, Country, and Coca-Cola: The Definitive History of the Great American Soft Drink and the Company That Makes It. “Fortunately,” he says “we can hazard a good guess, since a chemist studying various wine cocas reported in 1886 that Vin Mariani contained 0.12 grain cocaine per fluid ounce. The dosage on the wine’s label called for a ‘claret-glass full’ before or after every meal (half a glass for children). Assuming the wineglass to hold six fluid ounces, three daily glasses would amount to a full bottle of 18 ounces, or 2.16 grains of cocaine per day, enough to make someone feel very good indeed.”

From coca liquors to pasta

Taking up Mariani’s lead, Andean nations have apparently carried out their market research and are now doing their utmost to commercialize other types of alcoholic coca beverages. Take for example the Peruvian brewery Cervecería Peruana, which plans to export a coca beer to countries such as China and South Africa. The beer is called Apu, a magic word signifying God, power and richness in the Quechua indigenous language.

Another Bolivian beverage company recently launched a coca whisky. The drink is called Ajayu, which translates as soul or spirit in the indigenous Aymara language. The whisky packs a punch, with 32% alcoholic content. According to Ajayu’s producer, the whisky conserves all the essential qualities of coca, “including more calcium than milk, more iron than spinach and as much phosphorus as fish.”

Boosters hope that Ajayu winds up being the emblematic brand of Bolivia, much as tequila became identified with Mexico. Each separate bottle of Ajayu contains 25 grams of coca, and the brand’s producers hope to export the drink to Cuba or Venezuela.

Historically, Mariani pioneered the use of coca leaf not only in beverages but also in other products such as cordials and tea. Lozenges meanwhile were marketed toward singers, teachers, and others who sought to ease the throat. Today, Bolivian companies have taken up Mariani’s lead and are using coca to make teas, syrups, toothpaste, liqueurs, candy, and pastry. In one Italian restaurant in La Paz, diners can even order coca spaghetti made from a mixture of wheat flour and coca leaf.

Though Bolivia’s promotion of Coca Colla may cause some to chuckle, the move could contribute to a further deterioration in U.S.-Bolivian relations. For years, Bolivia’s indigenous peoples have bristled under the U.S.-fueled drug war which demonized coca leaf. In a snub back at Washington, coca growers from the Chapare region proposed Coca Colla and it is now Evo Morales, himself a former coca farmer from Chapare, who has taken up coca nationalism as a cultural and political rallying cry [for those interested in pursuing this matter further, see my chapter on coca nationalism in my book].

When speaking before adoring crowds, Morales drapes a garland of coca leaves around his neck and wears a straw hat layered with more coca. What’s more, Morales claims that the United States seeks to intervene in Latin American countries by playing up the drug war. Washington’s policy, Morales has charged, is merely “a great imperialist instrument for geopolitical control.” The Bolivian President argues that the only way to do away with drug trafficking is to cut off demand.

Raising eyebrows in Washington, Morales recently requested the removal of coca leaf from a list of banned substances under the 1961 U.N. anti-narcotics convention. Specifically, Bolivia wants to modify two subsections of Article 49 of the 1961 U.N. convention on drugs that prohibit chewing of coca leaf. In a theatrical move, Morales held up coca leaf and actually chewed it in front of a U.N. panel in Vienna to demonstrate that it had no ill effects. Hardly amused, the Obama administration announced its opposition to Morales’ proposal the very next day. 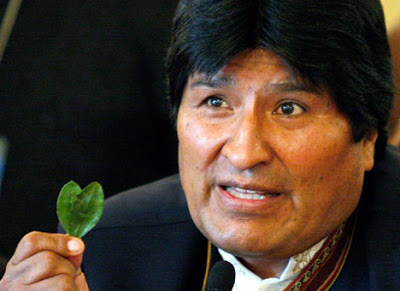 The Bolivian president’s U.N. diplomacy is not too surprising given that Morales originally came to power in January, 2006 promising to end forced eradication of coca. In fact, the recent scuffle at the U.N. caps a number of other diplomatic fall outs: in September 2008 Bolivia expelled U.S. ambassador Phil Goldberg, accusing the diplomat of “conspiracy.” Shortly thereafter, Morales suspended official collaboration with the DEA.

Striking back, the Bush administration suspended Bolivia’s participation in a tariff-exemption program for Andean nations, asserting that Morales was not cooperating sufficiently in the war on drugs. Categorically rejecting that assertion, the Bolivian leader cited U.N. statistics demonstrating that his government had done better than Washington allies Colombia and Peru in seizing shipments of cocaine. Indeed, local authorities claim they have confiscated tons of cocaine and destroyed many drug laboratories.

It’s difficult to see a way out of the morass, given that the Obama White House does not seem very interested in reversing the foreign policy course of the earlier Bush years. In fact, Washington says Morales is not doing enough to clamp down on drug smuggling and has continued to exclude Bolivia from the U.S. tariff exemption program.

“An excluded black man can exclude an Indian man,” Morales declared. “The so-called Indians and blacks have historically been the most excluded, the most marginalized,” Morales added. “If he wants to exclude us let him continue to exclude us; that doesn’t matter to us.” In another round of the endless tit-for-tat, Morales recently expelled U.S. diplomat Francisco Martínez, also on charges of conspiracy.

Joking aside, the Coca-Colla imbroglio may add yet another twist on the recent diplomatic fall out. Like neighboring Peru, Bolivia permits certain limited cultivation of coca for use in cooking, folk medicine and religious rites. If plans for Coca Colla move forward, however, Bolivia will have to grow more coca, thus putting a further strain on U.S. relations.

Under Bolivia law, up to 30,000 acres of land may be cultivated with coca, but Morales wants to increase that to nearly 50,000 hectares in an effort to further commercialize the leaf. With the new excess cultivation, Bolivia will be well placed to launch its new Coca Colla. While promoting the beverage is sure to irritate Washington, the move is politically smart for Morales as he may drum up support against an unpopular corporation while helping to bring welcome resources to coca growers.

“Whether or not the initiative is a success,” notes a recent column on the environmental website treehugger, “Bolivia may find international support for standing up to a company that many see as an unfeeling capitalist juggernaut with a product that better serves the environment and livelihoods of the people producing it. No word on how Coca-Colla will taste, but there’s already something refreshing about it.”

4 Responses to Bolivia’s Evo Morales : Putting the Coca Back in Cola