BOOKS / 1,000 Recordings to Hear Before You Die 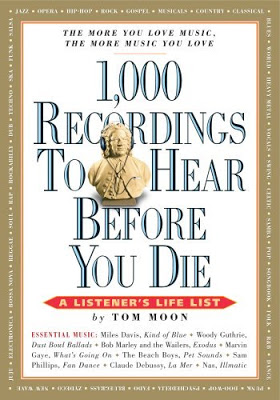 When John W. Wilson wrote about music and film for the Houston Chronicle back in the early 70s he’d slip articles to us at Space City! under a pseudonym. Space City! was an underground newspaper that wrote about things in Houston that weren’t otherwise being covered and that helped to coalesce and inform a counterculture and left community there. While doing it, and having a lot of fun in the process — except when we were dodging bullets from the Knights of the Ku Klux Klan — we ruffled a feather or three. Expect to see John’s byline here in the future.

1,000 Recordings to Hear Before You Die, A Listeners Life List, a new book by Tom Moon published by Workman Publishing, is a monumental achievement. Released in August of 2008 it represents a prodigious amount of work encompassing three years of Moon’s life. He listened to countless recordings, culled those down to 3,000 titles, then finished the job and got the list to its final number.

It makes for some interesting reading. Tom Moon, an award-winning music journalist, is a regular contributor to National Public Radio’s All Things Considered as well as Rolling Stone, Blender and other publications. He is an excellent writer and it is fun to read his short descriptions of the selected works, because as a curious fellow I like to know what I’ve missed and why I might want to catch up with it.

Curiously all of Moon’s selections are albums. This is a conscious choice. “Spend a while inside an album, and a deeper impression immerges — of the artist, and the time of the work’s creation,” he writes.

Curious, I say, because a lot of great recordings are singles from the days of 78s and 45s and should have been covered individually. The album as a work of art is a 60’s construct, and viewing all of this music through that lens is limiting.

The musical works are presented alphabetically which I applaud because doing it by genre would mean that lot of folks might have skipped right past the classical and jazz titles in favor of the rock. It really is much more fun to read it front to back and get the odd juxtapositions of dissimilar works that Moon intended.

Then there is the quirky pleasure of questioning the author. Why is the Beach Boy’s Good Vibrations classed as Pop while Pet Sounds is Rock? How come there’s no John Denver or Tom Jones? How come I think this is an oversight?

Personally, I think The Wild, The Innocent and the E-Street Shuffle is a more nuanced, stronger Springsteen album than Born to Run. Even if a Bluegrass genre only had two members, Bill Monroe and Allison Krause, that would be fine; they should never be lumped with country.

Porgy and Bess should have been in with musicals and the list could have done with about 25 fewer operas which would have lowered the number of essential operas for the casual music fan to about three. And how does he explain overlooking the musical Oklahoma? I think every American of a certain age can sing, “Oh, What a Beautiful Morning.”

I would eliminate the entire pop category. Pop in most circles is a derogatory term and the artists he put in that category include Joni Mitchell, Michael Jackson, Dionne Warwick, and Alanis Morissette to name a few. Folk and Rock and R&B could have handled the load.

He also needed a soundtrack category because that’s where the soundtracks for Trainspotting, O Brother, Where Art Though, Saturday Night Fever, and Dazed and Confused belong. Which brings up the question of how did he overlook The Big Chill, Dream Catcher, The Breakfast Club, and American Graffiti? This is why he needed fewer operas.

The World category contains music from 50 countries, but he does some strange things like using the terms Latin America and Middle East even though there are plenty of listings for countries within both regions. So, why not list the countries?

All of this is the fun of the book — the discussion that goes along with the why of the author’s musical choices.

But as I sit here thumbing through the book I can’t help but feel that it represents an artifact of a previous era. As a one-time book publisher, I appreciate the tidiness of this sort of project. It’s so easy to explain to a buyer. “This is a book that’s a list of things and its sure to be of interest to….” and you fill in the blank.

But the people interested in music these days are out surfing the web and getting their information real-time and they want it updated as new information comes in. That’s why the Wikipedia has replaced paper encyclopedias.

The good news here is that there’s a website based on the book and Moon is blogging there and he’s added his ten best for 2008. So, this might be an evergreen project.

So all is not lost and perhaps we’ll be saved from the specter of 20 years of What Color is Your Parachute or the 2000th iteration of Chicken Soup for the (fill in the blank).

Given the ease with which information flows these days, people also have little need for an expert to tell them what music should be on their playlists or an aggregator such as Workman Publishing to pull it all together and print a book.

Websites such as Pandora and ILike can match a listener to a variety of music based on the listener’s preferences. Then there are the social networking sites such as Facebook and MySpace where members post their favorite songs for their friends to discover. And getting recommendations from friends is way better than getting them from a stranger.

Tom Moon may be a great guy and he certainly appears to have plenty of credentials from his playing experience right through his critical experience writing for magazines such as Rolling Stone but you and he might have exceptionally different tastes in music and you’d probably rather not spend $20 to find this out.

The title is also a bit of a misnomer. This is going to sound pedantic and nitpicky but the title says it is a list of 1,000 recordings to hear before you die which sounds inclusive but these are all musical recordings.

If a publisher is going to title a book in that fashion there ought to be a mention of Edison’s first recordings, or King’s “I have a Dream Speech,” or MacArthur’s “Old Soldiers Never Die” speech just to name a few memorable recordings which, if you’re interested, can be found at the Library of Congress courtesy of the National Recording Preservation Board (http://www.loc.gov/rr/record/nrpb/).

And finally, why do we have to hear this music before we die? I’d be willing to bet no one is going to heaven or hell or qualify for reincarnation based on the recordings they listened to prior to their death.

If you’re going to take your things-to-do-before-you-die guidance from pop culture I’d recommend Earl’s approach in the TV show “Leave it to Earl”. Make a list of all the people you’ve wronged in life and try to make amends. You can listen to the recommended recordings on your IPod while you’re making the rounds if you want, but either way, take care of Earl’s list and you dramatically improve your chances in the afterlife.

[John W. Wilson is a publisher and writer who lives in Houston. He was editor of the Daily Cougar at the University of Houston and wrote about music and film for the Houston Chronicle while writing on the sly for Space City!, the Houston underground paper founded in 1969. (That’s where we first knew him: one of Space City!’s editors was The Rag Blog’s Thorne Dreyer.) John also directed Gulf Publishing’s book division. His websites are yourtexasmusic.com and yourtexasmusicnotes.com .]

Go to the the official site of 1,000 Recordings to Hear Before You Die.

Find 1,000 Recordings to Hear Before You Die by Tom Moon on amazon.com.

This entry was posted in Rag Bloggers and tagged Books, John Wilson, Music. Bookmark the permalink.

1 Response to BOOKS / 1,000 Recordings to Hear Before You Die