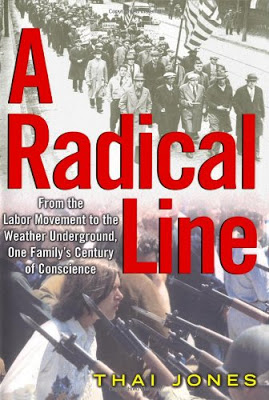 Generations in the struggle:
A ‘retro-review’ of
Thai Jones’ A Radical Line

Throughout A Radical Line the progressive fights of Thai Jones’ extended families, Weather Underground and earlier, are connected to the collective struggle against class disparity, racism, and the Viet Nam War.

[A Radical Line: From the Labor Movement to the Weather Underground, One Family’s Century of Conscience by Thai Jones (2004: Free Press); Hardcover; 336 pp; $26.]

Reading Neil Gordon’s novel and then viewing Robert Redford’s film, The Company You Keep, a fictitious portrayal of the Weather Underground Organization (WUO), led me to re-read Thai Jones’ book on his family — his mom and dad, WUO people Eleanor Stein and Jeff Jones, as well as their parents, Albert Jones a Quaker and WWII conscientious objector and Annie and Arthur Stein, labor movement people and both members of the Communist Party.

While I actually liked Redford’s film, and the book even more, A Radical Line is much more encompassing as it portrays generations and real lives in the continuing struggle for a democratic, socialist America — yes, Eleanor and Jeff and I think Thai, as well as many of their WUO comrades and their children, continue the fight today.

I had no intention of writing a review as I began to re-read A Radical Line. The story, though, is so engrossing, and Thai Jones’ combination of detail, thoughtfulness, and drama pull you in as words bring depth to his extended family as well as the collective, progressive struggle in the United States.

Jones’ craft as a writer shows in the book’s poignant beginning, as Jones describes his parents being arrested — reflecting on his own memories of the event as a four year old child.

There had to be something I could do to help my parents. I made a fast survey of my possessions: a cowboy outfit, a coloring book, a stuffed Tyrannosaurus. I opened the drawer of my little desk and picked up my child’s scissors. The ends were rounded, and the blades were covered by blue plastic guards. Bouncing them in my hand and snipping at the air, I considered putting on the cowboy hat and charging into the hallway with scissors blazing to defeat these men who had come to hurt our family. Even then, I knew it was a battle against long odds. But I didn’t realize it was a question that many in my family had already faced. They had chosen to fight.

Throughout A Radical Line the progressive fights of Thai Jones’ extended families, Weather Underground and earlier, are connected to the collective struggle against class disparity, racism, and the Viet Nam War. Jeff Jones was raised in Southern California and his father worked for Walt Disney Corporation. But as already noted, Albert Jones was a pacifist, and his experience working as a conscientious objector at Civilian Public Service Camp #37 in Coleville, California, during WWII is itself a story.

His path was not easy as his father disapproved and church people at the Methodist congregation that nurtured his views abandoned him — Camp #37 became home:

He was surrounded by pacifists. Each Sunday they held a silent Quaker meeting, and that was the only time in the week that the men were not in heated discussions about their faith. Coming here, Albert finally felt welcome.

Jeff Jones’ early lessons were pacifism and peace and not a long leap to the civil rights movement and opposing the Viet Nam War.

Eleanor Stein’s parents were much more political. Annie was introduced to socialism in high school and was politicized even further as a student at Hunter College. Thai Jones describes her early participation in the National Student League and the Communist Party.

It was Annie who politicized Arthur. Initially she was disheartened because her husband was apolitical, but she began leaving copies of The Daily Worker around their apartment and soon Arthur was attending meetings and demonstrations.

Like Albert Jones’s lifelong commitment to nonviolence, Annie and Arthur Stein never stopped fighting class disparity and racism. In the book, Thai remembers Albert’s assertion to Jeff before the Days of Rage: “Son, I believe very strongly in your goals. But if you set out to hurt somebody, I would hope and pray that you are hurt first.”

Concurrently, Eleanor was clearly nurtured by Annie’s work with civil rights stalwart Mary Church Terrell and her political work on education in New York City. She was also nurtured by her father’s labor activism, his founding of the Fair Play for Cuba Committee chapter in Brooklyn, and his appearance before HUAC, where he was represented by Victor Rabinowitz, the attorney who also represented Paul Robeson and Pete Seeger.

Annie and Arthur sent Eleanor to Camp Lakeside, a “red diaper” summer camp. Eleanor recalled her mother’s expulsion from the CP over China and mother continued to lecture daughter throughout Eleanor’s WUO years:

“Look,” Annie would tell Eleanor, “I lived through the 1930s when the capitalist system was on the ropes. Labor unions were strong and men were out of work, on breadlines.” Pausing for effect, she would light a cigarette, sip her scotch and soda, and go to the bookshelf for her copy of Lenin’s What Is to Be Done? “It was obvious in 1917,” she would say, waving the book in her daughter’s face. “The workers were in the streets. Who is going to run the means of production in your revolution? The hippies? You’ve got to be kidding.”

The heart of A Radical Line, however, is Jeff and Eleanor’s lives in SDS and the Weather Underground and their coming together as a couple. There are rich photographs in the center of the book — especially one of Eleanor wearing her lambswool jacket with a raised fist salute in front of Columbia University Law School. Most endearing is a page with portraits of both Thai, as a very young child, and Jeff in running gear.

We learn about Eleanor quitting law school after participating in the Columbia University student takeover in 1968 and of Jeff joining SDS while a student at Antioch. There are other events that have been written about by Mark Rudd, Cathy Wilkerson, Bill Ayers, and others; but Thai Jones presents a different take, new insights, and of course issues that still leave us with questions about the Weather Underground and the struggle in general.

We learn a great deal about WUO life underground but for the purpose of this review I would like to address one particular issue.

It begins in early July 1969, when Eleanor was part of a delegation that went to Cuba to meet with representatives of the National Liberation Front and of the North Vietnamese government. Others on the trip included Bernardine Dohrn and Diana Oughton.

The North Vietnamese had invited Eleanor and her comrades so that they could interact and learn how the anti-war movement in the United States might help to end the War in Vietnam. One of the first lessons was on the lack of focus of American activism. The teacher pointed out that day that anti-war slogans and chants, like

“No More Vietnams” vs. “Two, Three, Many Vietnams”
“No More Wars” vs “Bring the War Home”
“Long Live the Victory of the People’s War” vs. “Make Love not War”

were contradictory. What was the goal?

The Americans traveled Cuba with their Vietnamese mentors and one man, Nguyen Thai, stood out — the man from whom Thai Jones inherited his name. There were hours and hours of discussions and Eleanor and the other Americans became focused on taking one message to the masses back home: “End the War Now.”

When they returned to the U.S., however, they were informed that their leadership had decided to form small collectives; their job was not to organize the masses. Thai Jones writes, “Before Eleanor had even clanked down the gangway to the shore, Nguyen Thai’s plan for an all-encompassing mass movement was sunk.”

And I would argue, that it was at this point, before the forming of the Weather Underground, before the Townhouse bombing, before the manifestos and armed propaganda, before freeing and then being betrayed by Timothy Leary, and before the breakup of WUO, the youth movement for social justice and equality in the United States was doomed. That is, doomed as a movement.

While the Vietnamese spoke of — and represented — a people’s movement, people on the ground weren’t included in the United States. The people of WUO and the anti-war movement in general were young — we didn’t take the lessons that others taught us. We didn’t pay attention to how different Fidel and Che’s revolution in Cuba was from Che’s adventurist foray into Bolivia. We didn’t know how to organize a people’s war.

My analysis, of course, is only about a small part of Thai Jones’s book. And the people that he writes about, particularly his parents Eleanor Stein and Jeff Jones, as well as their WUO comrades, have continued, maybe not as a movement, but nevertheless continued, the fight to end class disparity and racism in the United States and throughout the World.

Their mistakes as well as their continuing commitment and passion offer important lessons. As does Thai Jones’ book, A Radical Line.

[Alan Wieder is an oral historian who lives in Portland, Oregon. His new book, from Monthly Review Books is titled Ruth First and Joe Slovo in the War Against Apartheid.]