Posted on September 8, 2010 by Thorne Dreyer 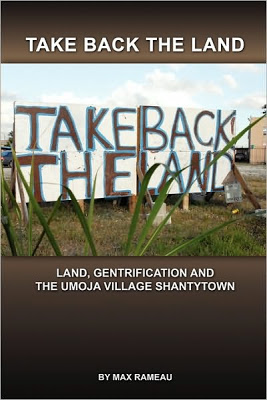 Take Back the Land:
Give root to democracy

I first heard about a group called Take Back the Land, which was illegally moving homeless families into empty homes in Miami, in a study group about the Civil Rights movement and the grassroots organizing that made it so powerful.

The reference was highly appropriate. In many ways, Take Back the Land is a direct heir to that bottom-up, Black self-empowerment, civil disobedient, movement-building tradition, and is one of the most inspiring examples of a group renewing and developing that tradition today.

In our moment of crisis and stagnation, here is a group full of creativity, improvisation, and highly potent political analysis. Through its actions, the group proclaims: “Families are being foreclosed on and kicked out onto the street? We’re not going to lobby Washington and hope for some crumbs to come down. We’ll take matters into our own hands and move people directly into homes!”

This is precisely the spirit of direct action and participatory democracy that kick-started the Civil Rights movement, and the spirit that we need if we are to escape the human suffering that the elite are imposing on the poor and working class in this economic crisis.

Max Rameau, author of this book and a principal organizer in Take Back the Land Miami, came and spoke in Philadelphia a few months ago. I was struck not only by how charismatic and effective a speaker he was (something I could say about many smooth-talking political or corporate salesmen of our age), but by how Max was able to break down complex, abstract theoretical questions into common language that was easily understood.

In this way, he demystifies politics and translates concepts usually reserved for academics or professionals in such a way that average, everyday people can take away something new and useful from the exchange. It’s clear that his primary goal is not an ego trip to show off his brilliance, or to sell books and make money, but to do something much more difficult and meaningful: to spark movement to force the U.S. government to recognize housing as a human right.

This book is written in that same frank style. In fact, it’s basically a how-to on grassroots housing organizing. It’s short — only 132 pages — but all you need to know is laid out here: the political context of Miami and the nation in terms of lack of affordable housing and gentrification that drives poor and Black people out of their homes, the strategic decisions and organizing that go into launching a new organization and campaign, the challenges and joys of working with homeless people, and the difficult and deceptive terrain of interacting with politicians, who are often agents of larger and more powerful corporate forces.

Max Rameau just tells the story of his group, but in such a provocatively specific way. He explains to us exactly how things were done, who did them, who interfered and how, and he’s not at all afraid to name names.

The book centers on the incredible story of the Umoja Village, a shantytown built by Take Back the Land and allies on a vacant lot in a poor Black section of Miami. Because “In South Florida… local governments responded to the [housing] crisis by actively decreasing the number of low-income housing units” (pg. 23), Take Back the Land took the initiative to seize land and invite homeless people to take up residence there. The purpose of the action was not only to house people, an immediate need, but to draw attention to the crisis and to the government’s inaction, thereby hopefully shaming them into creating more low-income housing.

In the long run, the group’s “Political Objectives” were as follows (72):

Even before the land seizure, much groundwork had been laid, including debating the strategy and politics of this type of action, discussing the possibility with allies and neighbors of the site, and trying to line up legal, fundraising, and other forms of support that would be necessary. Citing a legal precedent that homeless people had a right to not be evicted from territory where their basic living needs were met, the group was able to dissuade the police from immediately evicting them once they did move onto the land.

Seeing the police cars back away without arresting anyone made a strong impression on the homeless and poor people moving onto this land. “This was a real, tangible victory that the people witnessed with their own eyes” (65).

With shanty homes and compost toilets built, the Umoja Village stood on the land for six months, and was self-organized by the homeless residents. Take Back the Land prioritized that their group, while inspiring and leading this takeover, would become increasingly unnecessary in the day-to-day operation of the shantytown, so that the residents had total control.

The self-empowerment of the homeless was one of the most inspiring aspects of this book. You read about individuals who had been victims for decades, or their entire lives, and were grappling with mental illness and/or drug addiction, becoming confident by working with one another and making the decisions that affect their lives.

[W]e assert that the most marginal members of society are better qualified to run their “city” or “village” than the college educated elected official and bureaucrat. We not only asserted the proposition, we proved it as Umoja’s residents made real decisions about the rules of the Village and the manner in which it was run (75).

Here is precisely the principle of participatory democracy that Ella Baker championed in the Civil Rights movement. Rather than turn for help to political elites, religious leaders, business leaders, or whomever, we can take matters into our own hands and manage our own affairs. Forget what passes for “American Democracy.” Real democracy is about “people power.” Demos in Greek means people, cracy means rule. Put it together — Democracy: Rule by the people.

Unfortunately, true democracy is rarely tolerated by the U.S. corporate and governmental establishment, and that was the case in Miami. Shortly after the Umoja’s six-month anniversary celebrations, a “suspicious” fire burned down the entire village. Before Max, the homeless residents, and allies could clear the wreckage and begin the process of rebuilding, the city of Miami sent in the police to permanently evict them from the land.

What follows the disastrous fire and eviction is perhaps the most intriguing section of the book. Take Back the Land, still trying to reoccupy the site, is approached by a “progressive” city councilperson, who offers to house all the homeless residents in a new low-income housing unit that Take Back the Land would develop. The group then has to debate whether to accept this deal, which would mean giving up some of their oppositional character against the government, in order to gain the immediate goal of moving people off the street and into homes.

The difficulty of this decision opens up an important question that all grassroots movements need to address at some point: whether to compromise with government/”the system” and receive tangible gains, or hold fast to ideals and principles and potentially miss some opportunities. It is never an easy decision.

as the opposition, it is difficult for us to accept victory, even when we win. Virtually any settlement between us and our political targets can be interpreted as a sell out simply because there is an agreement or because those in power no longer stand against the demand. Consequently, we, as a movement, must clearly define what constitutes victory, particularly in the context of the US political and economic system (118).

If the goal is to “Build a new society” and that necessitates sweeping away the existing order of oppression, how do you compromise with elites whose job is to uphold that very order? On the other hand, because those elites have the power to give you what you need, at least in the short term, how can you avoid accepting a deal when they agree to give you something you need?

Ultimately, it is a question about “revolutionary reforms” — theoretically a change in policy (reform) that leads to the empowerment of a movement, and therefore the ability to carry on further campaigns towards revolution. But what does that actually look like in a capitalist society that has successfully undercut and co-opted grassroots social movements for the last century or more, and which even more skillfully ignores and silences those movements so that they feel powerless and marginalized?

In a situation as desperate as our own, how do you avoid the temptation to work within the system, even if it means abandoning some of your political principles? And how do you stay true to those ideals while at the same time engaging that system to gain concrete victories?

I encourage all to read this book and discover how Take Back the Land wrestled with these and other pressing strategic questions. I hope it won’t be a “spoiler” to say that in the end the city of Miami betrayed the “deal” and the land was never restored, nor was there any new low-income housing construction. The government failed the public yet again.

The U.S. housing crisis has only gotten worse since this book was written in 2007, especially now that the economy has tanked. An estimated 3.5 million homes will be foreclosed on in 2010, a 25% jump from 2009. The work of Take Back the Land therefore becomes increasingly relevant and inspiring. As Michael Moore’s latest film Capitalism: A Love Story highlighted, the group has gone from taking over one piece of land to moving many homeless families into abandoned buildings throughout Miami. In this way, they have continued to make headlines and push the issue of housing as a human right.

There is no way to sugarcoat the loss of Umoja Village. The land we controlled for just over six months is now out of our control, a tremendous defeat for the community and the movement. Our efforts to take full and legal control over the land also ended in failure. However, none should confuse the killing of a deal with the killing of a movement. Umoja not only forged a model for the adversarial takeover of land, but also established a potential conclusion to the struggle: community ownership of that land.” (130)

To solve the immense problems we face in this crisis, not just housing but unemployment, lack of health care, attacks on immigrants and Muslims, the endless wars, climate chaos, etc., requires active, confrontational, and creative social movements. Even more, it requires a return to Ella Baker’s principle of participatory democracy, the taking of power away from unsympathetic elites and putting it into the hands of people who are directly affected by issues on the neighborhood level. Take Back the Land is a particularly striking example of a group hard at work pursuing this vision.