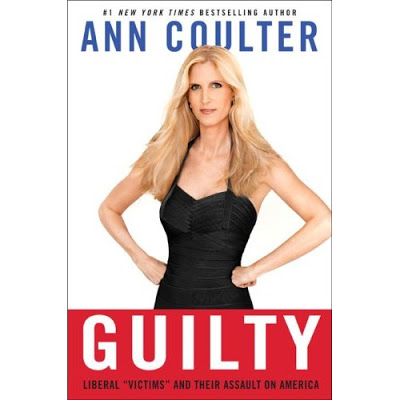 As Media Matters for America has noted, author and syndicated columnist Ann Coulter recently announced that she is scheduled to appear on the January 6 broadcast of NBC’s Today to promote the release of her new book, Guilty: Liberal “Victims” and Their Assault on America, which Media Matters obtained in advance of its January 6 release. Media Matters has documented that NBC has repeatedly provided Coulter a platform to spew her inflammatory rhetoric even as NBC-affiliated hosts and anchors have expressed disapproval of her statements or criticized the media for promoting her. Coulter’s latest book is rife with such inflammatory and offensive comments.

Examples of such comments from Guilty include the following:

Liberals’ hysterical obsession with the “Republican Attack Machine” turns Democratic primaries into a contest of: “Who’s the Biggest Pussy?” Although I would have voted for “All of Them,” inasmuch as none of the Democrats could face questions from Fox News’s Brit Hume, the winner turned out to be [Barack] Obama. Hillary [Clinton] claimed to be a victim of Republicans, while Obama claimed to be a victim of Republicans, Hillary, and racists. [Page 79]

Coulter later suggests that Sen. John McCain should also be nominated for this contest:

Alas, despite liberals’ terrific fear of John McCain and the Republican Attack Machine, evidently McCain was more afraid of the real attack machine: the mainstream media. He wasted no time in denouncing the North Carolina ad. Obeying the media’s command that Republicans not mention any facts unfavorable to Obama, McCain said, “There’s no place for that kind of campaigning, and the American people don’t want it.” He promptly fired off a letter to the North Carolina Republican Party presuming to tell them not to run the ad.

Say, is it too late to nominate someone else for that “Who’s the Biggest Pussy” contest? [Page 88]

In any event, divorced mothers should be called “divorced mothers,” not “single mothers.” We also have a term for the youngsters involved: “the children of divorce,” or as I call them, “future strippers.” It is a mark of how attractive it is to be a phony victim that divorcées will often claim to belong to the more disreputable category of “single mothers.” [Page 36]

Later in the chapter, Coulter writes: “Single motherhood is like a farm team for future criminals and social outcasts.” [Page 38]

On the bright side, look at how low the mainstream media have had to stoop lately to find their Republican heretics. The most famous “former Republican” is Kevin Phillips, who attended Bronx High School of Science, Colgate University, the University of Edinburgh, and Harvard Law School. Even John Dean was at least a practicing lawyer. The 2008 version is Kathleen Parker, who went to Converse College and the University of San Francisco. The educational attainments of Republican turncoats may change, but curiously, their gender always remains the same. They are women, not limited to the biological sense. [Page 114]

Even grifters know that to be embraced by the cool people in America, you must claim to be a victim, preferably abused by religious fundamentalists.

In a related phenomenon, various half-black celebrities insist on representing themselves simply as “black” — the better to race-bait their way to success.

Actress Halle Berry, singer Alicia Keys, and matinee idol Barack Obama were all abandoned by their black fathers and raised by their white mothers. But instead of seeing themselves as half-white, they prefer to see the glass as half-black. They all choose to identify with the fathers who ditched them, while insulting the women who struggled to raise them.

In 2002, Berry engaged in wild race-baiting to win her Oscar and then ate up most of the awards show with an interminable acceptance speech claiming that her award was “so much bigger than me.” People who say “it’s bigger than me” always mean it’s just about them. During the 2008 campaign, Barack Obama repeatedly said the exact same thing: “This election is bigger than me.” Would they be able to pawn off their personal victories as transformative events for the nation if they were not claiming to be doing it for the blacks? [Page 7]

The media accuse Republicans of playing dirty pool, but they turn to the retarded press secretary for an attack on his former boss. [Page 118]

Rich, who became qualified to comment on U.S. foreign policy, national security, and presidential politics after spending a childhood dancing his favorite numbers from Oklahoma! in his mother’s panties and then spending twelve years reviewing theater for the New York Times, attacked [former Talon News “Washington Bureau Chief” Jeff] Gannon for not being a “real newsman.” Not only that, but, Rich breathlessly reported, there were “embarrassing blogosphere revelations linking [Gannon] to sites like hotmilitarystud.com and to an apparently promising career as an X-rated $200-per-hour ‘escort.’ ” In Rich’s estimation, $200 an hour was way too much to pay a male escort who wasn’t Latino. Now, if there’s anybody in this world who knows what a real man is, it’s Frank Rich. But as for knowing what a real newsman is, that’s another story. [Page 198]

Coulter later wrote: “The entire scandal that Frank Rich complained was not getting enough attention was that Gannon was a gay Republican. (Because if there’s one thing Frank Rich can’t abide, it’s a gay man who’s too scared to come out of the closet).” [Page 200]

But according to [New York Times columnist Paul] Krugman the “pretty honest” Clinton administration was victimized by unfair news coverage. The only living human who might agree with that assessment is Bill Clinton, who derisively referred to Newsweek magazine as “the house organ of Paula Jones” — an unfortunate use of “Paula Jones” and “organ” in the same sentence.

Yes, he was referring to the magazine that refused to report Paula Jones’s accusations against Clinton for months, described Jones as a “dogpatch Madonna,” killed Michael Isikoff’s exclusive on the Monica Lewinsky scandal, and unaccountably employs braying left-wing slattern Eleanor Clift, who named Clinton the “Biggest Winner of the Year” for being “a colossus on the world stage” in 1999 — the very year Clinton was impeached and the entire Supreme Court boycotted his State of the Union Address. [Page 193]

Why do Republicans never learn? They will never get credit for apologizing to the endless stream of fake liberal victims. Instead, everyone sees that Republicans are milquetoast sops. Republicans have turned themselves into such doormats that a major Obama fundraiser felt free to sneak into the Republican National Convention to disrupt Sarah Palin’s speech — and then portray herself as a victim of the Republicans for being asked to leave.

The storm troopers at the Republican National Convention were Jodie Evans, a major Obama fundraiser, and her fellow outside agitator, Medea Benjamin.

And Republicans fall for fake victims every time. Blake Hall, one of the Republican delegates who removed the screaming banshees, sent an e-mail to the Idaho Falls Post Register contritely explaining that the protesters had “violated convention rules by being in a place not permitted by their guest passes.” He continued defensively, “They were asked to cease and they refused.” And — as Palin continued to try to speak over the disrupters — they “continued their disorderly behavior at which point I was requested by the Sergeant at Arms and other deputies to assist in their removal.” Not exactly Ronald Reagan saying, “I’m paying for this microphone!” Republicans are apologetic about not supinely turning over their convention to satanic dervishes. [Pages 177-178, 179]

At one of his campaign speeches, Allen jokingly introduced a “tracker” from the campaign of his Democratic opponent, Jim Webb, to the audience. Trackers are little Nazi block-watchers, who follow a candidate around, recording everything he says — and everything his audience says — so the selectively edited videos can be posted online for ridicule. [Page 165]

Coulter makes several other references to the Nazis and the Holocaust in the book, including the following:

Not surprisingly, Hollywood has taken a leading role in portraying single mothers as victims, while relentlessly promoting promiscuity, single motherhood, prostitution, and divorce to the detriment of the most vulnerable members of society. But if anyone makes a peep of criticism, suddenly it’s 1939 Germany and overpaid writers from Murphy Brown are the Jews. [Page 45]

The most amazing thing liberals have done is create the myth of a compliant right-wing media with Republicans badgering baffled reporters into attacking Democrats. It’s so mad, it’s brilliant. It’s one kind of a lie to say the Holocaust was when the Swedes killed the Jews. But it’s another kind of lie entirely to say the Holocaust was when the Jews killed the Nazis. Liberals have actually neutralized the incredible press orchestration of left-wing propaganda by acting as if they are the victims of the all-powerful Republican National Committee. [Page 110]

Even stupid people — come to think of it, especially stupid people — will always take the path of least resistance. The young, the stupid, and the weak are invariably impressed with authority figures. College students in Weimar Germany emulated their Nazi-sympathizing professors just as college students in modern America emulate their America-hating professors and the stupid and weak in society at large emulate the liberal establishment. [Page 112]

Find Guilty: Liberal “Victims” and Their Assault on America on Amazon.com.