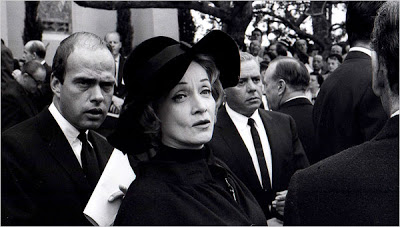 Barry Feinstein, the rock ’n’ roll photographer, was digging through his archives last year when he came across a long-forgotten bundle of pictures, dozens of dark, moody snapshots of Hollywood in the early 1960s.

And tucked next to the photographs was a set of prose poems, written around the same time by an old friend: Bob Dylan.

“It was the lost manuscript,” Mr. Feinstein recalled in a telephone interview from his home in Woodstock, N.Y. “Everybody forgot about it but me.”

The poems were so lost that Mr. Dylan, when told of the discovery, had forgotten that he had written them. (In his defense, it was the ’60s.)

But after languishing in storage for more than 40 years, the text and photographs will be published in November in a collection titled “Hollywood Foto-Rhetoric: The Lost Manuscript.”

It is the latest installment in Mr. Dylan’s seemingly never-ending body of work, which includes more than 50 albums, a critically acclaimed autobiography and a recently published collection of arty sketches called “Bob Dylan: The Drawn Blank Series.”

The new book, to be published by Simon & Schuster, includes more than 75 of Mr. Feinstein’s photographs and 23 of Mr. Dylan’s prose poems, which are each marked alphabetically to correspond to a photo.

The book was created during a period in the 1960s when Mr. Feinstein was a 20-something “flunky” at a movie studio, he said, having arrived in Hollywood eager to be part of the industry and having landed a job working for Harry Cohn, the legendarily abrasive president of Columbia Pictures.

“I was living in California, in Hollywood, working at the studio, and I thought there was something there journalistically in taking these pictures that were not at all glamorous,” Mr. Feinstein said. “They were really the dark side of glamour.”

He roamed around movie sets, snapping pictures backstage and in dressing rooms, and during off hours he drove around Hollywood with his camera in tow.

The result is a collection of pictures that are sometimes dreary and sometimes tongue-in-cheek, shots of movie props and roadside stands, topless starlets and headless mannequins. In one photo a young woman, visible only from the ankles down, crouches on Sophia Loren’s star on the Hollywood Walk of Fame, a hand pressed onto the cement. In another photo a parking lot at 20th Century Fox, marked by a large sign for “Talent,” is completely empty.

After assembling the photographs, Mr. Feinstein thought of Mr. Dylan, whom he had met before on the East Coast. “I asked him as a joke, ‘Wanna come out and maybe write something about these photographs?’ ” Mr. Feinstein said. “So he came out and wrote some text.”

Mr. Dylan, then in his 20s, arrived in Hollywood, examined the photographs and wrote his own prose poems to accompany them.

No one involved in the book can recall exactly when Mr. Dylan wrote the poems, which are by turns sparse, playful, witty and sarcastic. But the words faintly recall “Tarantula,” Mr. Dylan’s book of prose poems (or “Dadaist novel,” as some would call it) that was written in 1966, and they bear a strong resemblance to the “11 Outlined Epitaphs” in the liner notes of “The Times They Are A-Changin,” his 1964 album.

As the “11 Outlined Epitaphs” begin:

“I end up then

in the early evenin’

blindly punchin’ at the blind

what is it that’s exactly wrong?

The “Foto-Rhetoric” poems use similar punctuation and style. In the text accompanying a photo of Marlene Dietrich appearing stricken at Gary Cooper’s funeral in 1961, Mr. Dylan wrote: “t dare not ask your sculpturer’s name/with glance back hooked, time’s hinges halt.”

After the photos and text were pulled together into a rough manuscript, Mr. Dylan and Mr. Feinstein took it to a publisher, Macmillan, where executives expressed interest but were afraid that the pictures would bring a lawsuit from the studio.

So the manuscript was put aside, and Mr. Feinstein kept it for more than four decades in his vast collection of photographs, books and other papers.

“I knew it was an important document,” he said. “So I kept it in the back of my head all that time.”

Mr. Feinstein went on to develop a close collaboration with Mr. Dylan. He shot the cover photo for “The Times They Are A-Changin,” and dozens of photos of Mr. Dylan throughout the years.

Through his manager, Jeff Rosen, Mr. Dylan declined to comment on the book, and he is not expected to promote it.

But at 67, Mr. Dylan is just as prolific as ever, writing, touring and releasing albums. Just this week, he performed in Prospect Park, Brooklyn, and in October he is expected to release another collection of songs, “Tell Tale Signs: The Bootleg Series Vol. 8.”

“Hollywood Foto-Rhetoric” is the fourth book that David Rosenthal, the publisher of Simon & Schuster, has worked on with Mr. Dylan, including “Chronicles: Volume One,” his 2004 memoir, which sold nearly 750,000 copies.

“They’re lyrical, they’re funny, they’re singular,” Mr. Rosenthal said of the prose poems. “And everybody looking at them, when we first saw them, knew they could be by no one other than Bob.”

David Remnick, the editor of The New Yorker, said that this fall the magazine will publish two of the poems and perhaps a photograph or two.

Christopher Ricks, a professor of the humanities at Boston University and the author of “Dylan’s Visions of Sin,” an admiring study of Mr. Dylan, noted the contrast between the Hollywood book, in its black-and-white starkness, and Mr. Dylan’s most recent book, the collection of cheerful, brightly colored paintings.

“From the beginning, he’s been a mixed medium artist,” Mr. Ricks said. “He’s never been a straight linear person. He’s had a whole lot of miscellany.”