BOOKS / Bob Zellner’s ‘The Wrong Side of Murder Creek’ 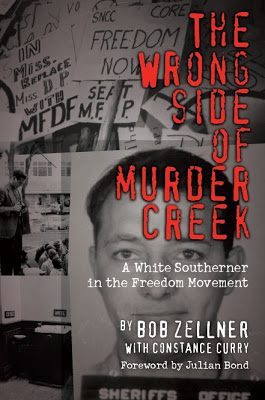 If you want a taste of what life on the front lines was like in the Southern civil rights movement, you have to read this book.

[The Wrong Side of Murder Creek: A White Southerner in the Freedom Movement by Bob Zellner with Constance Curry; Forward by Julian Bond. Published by New South Books, Montgomery AL/Louisville MO; ©2008, 352 pp. $27.95 cloth.]

To those of us who were civil rights activists in the 1960s, Bob Zellner and Constance Curry were legends in their own time. Not big legends like Stokely Carmichael and Julian Bond, but people you knew about even though you never met them, saw them or heard them speak.

They made their reputation working for SNCC, as white civil rights workers trying to liberate the South from American apartheid. Now Connie has helped Bob write his memoir of those perilous times. It’s quite a read.

Murder Creek is really two books in one, and the title itself is a double entendre. The first half is about growing up “progressive” in Alabama. The second half is about SNCC (the Student Nonviolent Coordinating Committee). Zellner joined the SNCC staff in 1961 and stayed with it until almost the end, watching it sputter out of existence a couple of years after it decided to become an all black organization in 1967.

Murder Creek is an actual body of water, dividing Brewton from East Brewton, in the south Alabama county where Bob did most of his growing up. Bob’s father was a Methodist minister, whose congregations were poor and dispossessed whites — the kind who lived on the wrong side of the tracks in East Brewton. Bob’s mother was a school teacher; both parents were educated and for their time and place, liberal on race as well as economic issues.

They raised five sons who were open to changing the way things were done in the South. Bob made his first stand for civil rights as a student at a Methodist college in Montgomery. In 1960 he met Dr. Martin Luther King and Rev. Ralph Abernathy in the local courthouse while they were on trial and attended a couple mass meetings in Abernathy’s church.

As a result he was summoned to appear before the Alabama state Attorney General, who, among other things, told him to report any contact with “Communists.” Some of the “Communists” on the A.G.’s list — Anne Braden, Virginia Durr — did reach out to Bob after reading about him in the newspapers and became his mentors in the civil rights movement.

For just trying to learn about the Montgomery movement Bob and four other students were almost arrested and were asked to leave the college. Bob was the only one of the four with parental support and the only one who did not leave. He stayed until he graduated, then went off to Atlanta to join SNCC.

Supported by a grant from the Southern Conference Education Fund, arranged by Anne Braden, Bob’s job was traveling to college campuses to talk to white students about the movement. But in SNCC style he went wherever he was needed — mostly where Jim Forman (SNCC’s chief administrator) wanted him to go.

Thus we don’t learn much about his experiences trying to break through the wall of white prejudice among young Southerners but we certainly learn a lot about demonstrations and jail. Bob was in plenty of those. In 1968, when he tried to ask a question of George Wallace at a Harvard convocation, Little George cut him off by telling the audience that “this man has been in practically every jail in Alabama” (plus a few in Georgia, Mississippi, Louisiana and Virginia).

That’s the other meaning of Murder Creek. Civil rights workers were fair game for whites wanting to defend the Southern way of life. Beating them was sport; killing wasn’t a crime. After reading detailed descriptions about all the times Bob was jailed and beaten one is amazed that he lived to write this memoir, that his is not the 41st name among the martyrs listed on the Civil Rights Memorial in Montgomery.

Bob was under constant surveillance, but neither the FBI nor the state police protected him or any other civil rights worker. The FBI took notes as they observed the Klan trying to beat him to death, and the police. . . well, they helped beat him up.

Reporters with notebooks and cameras offered the only protection to peaceful demonstrators, and they were also threatened. In a 1963 confrontation in Danville, Va. police broke the cameras of any reporter who used them. There’s a lot of civil rights history that wasn’t written in the “first draft” of newspaper stories because of police intimidation.

Although SNCC was the core of Bob’s life, it wasn’t all of it. Zellner went to grad school and worked at a variety of jobs. His post-SNCC movement job was with GROW, which meant both Grass Roots Organizing Work and Get Rid of Wallace. It helped black and white workers unite against bosses and owners. If you want a taste of what life on the front lines was like in the Southern civil rights movement, you have to read this book.

Find The Wrong Side of Murder Creek at NewSouth Books.

Thanks to Jay D. Jurie /The Rag Blog

This entry was posted in RagBlog and tagged Books, Civil Rights Movement, Sixties, SNCC, the South. Bookmark the permalink.