BOOKS : But Is That All He Should Be Charged With?

The Prosecution of George W. Bush for Murder is currently number 10 on the New York Times bestseller list. Thanks to Susie Madrak at Suburban Guerilla for pointing that out. 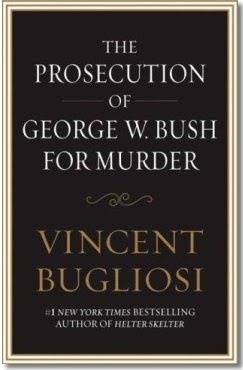 A review of Bugliosi’s The Prosecution of George W. Bush for Murder: The Prosecutor and the President
By Michael Collins / August 21, 2008

Vincent Bugliosi wants George W. Bush prosecuted for murder. There are others who are complicit in the crime, namely the Vice President and Condoleezza Rice, but Bush is the target of this famed former Los Angeles prosecutor (the Charles Manson case) and best selling author (Helter Skelter and The Betrayal of America as two examples). He is undeterred by the virtual major media blackout on interviews and advertising. He’s taking his case directly to the people through alternate media and the internet.

Bugliosi constructs a devastating case in The Prosecution of George W. Bush for Murder. As I write this review, it is still difficult to grasp my sense of shock at this title with this author’s name below it. A legendary prosecutor with a near perfect record in big cases, Bugliosi articulates one of the most revolutionary ideas imaginable in a mix of today’s otherwise vapid and obtuse political thinking. But first, the book and how the prosecutor makes his case.

He wastes no time in following up on the shock generated by the title. In the first sentence, we’re told:

The book you are about to read deals with what I believe to be the most serious crime ever committed in American history – – the president of the nation, George W. Bush, knowingly and deliberately taking this country to war in Iraq under false presences, a war that condemned over 100,000 human beings, including 4,000 American soldiers, to horrific, violent deaths.” (V. Bugliosi, p. 3)

The president “knowingly and deliberately” caused the deaths of U.S. soldiers and Iraqi civilians and that’s called murder, plain and simple. This is not a hypothetical case that could happen under special legal interpretations. When the president leaves office, he is subject to the same law as the rest of us. Bugliosi explains the ability to prosecute the case against George W. Bush by a district attorney or states attorney in any local jurisdiction where a life was lost in the Iraq war. Federal prosecutors also have that option. Bugliosi’s detailed analysis of this phenomenon offers some of the best analysis in the book and the detailed end notes.

Read all of it here. / ePluribus Media