BOOKS / ‘Cruel and Unusual: The Culture of Punishment in America’ 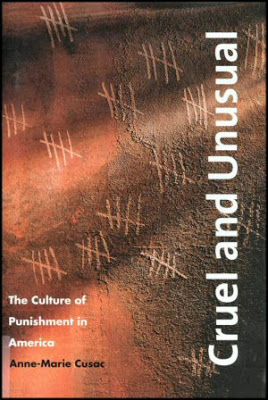 What I found striking in this volume is the extent to which advances in behavioral science and pedagogical experience have played almost no role in the evolution of corrections: Sentencing policies and prison conditions stem from basic, often religious and primitive, attitudes and beliefs.

When I was involved in prison reform in the early 1970s, my colleagues and I were shocked that our state, California, held so many prisoners, 22,000. Now, 35 years later, California’s prison population has ballooned to 165,000. Since 1973, the U.S. imprisonment rate has multiplied more than five times; we hold the dubious distinction of being the most imprisoning nation in the world.

Why does our nation, with 5 percent of the world’s people, have 25 percent of its prisoners, about 2 million? Why do we keep at least 25,000, maybe double that, in long-term isolation, a situation known to cause insanity, when other nations have more effective and humane methods of managing violence? Why do we inflict intense physical pain, sometimes to the point of death, with tasers, stun belts and restraint chairs at a time when violent crime is not on the increase?

Anne-Marie Cusac, an award-winning reporter (and published poet) with years of covering criminal justice issues, tackles these questions in her book, Cruel and Unusual: The Culture of Punishment in America. In just-the-facts, dispassionate style, she traces the methods our society has used to discipline offenders and nonconformists, from 17th century floggings and stocks in the public square to 21st century super-maxes designed to deprive inmates of human contact. She chronicles the motivations driving such vengeful practices, from Protestant Christian beliefs in the devil and the sinful nature of man to public fear of crime whipped up by television cop shows and exploited by politicians.

Cusac, who teaches communications at Roosevelt University in Chicago, also traces the history of American attitudes toward punishment from colonial days and the Rev. Jonathan Edwards in 1740 to modern-day Christian conservatives and the tortures at Abu Ghraib. (“All are by nature the children of wrath and heirs of hell…” preached Edwards, insisting that the wills of young “vipers” must be beaten down and broken.) Using a wide lens, she examines the intentional infliction of pain as a means to discipline and reform those who are deemed in need of chastisement, from lashings with cat-o’-nine-tails and boring holes in tongues with a hot iron, as was done in the Massachusetts colony, to hooding and beating inmates, or shackling them to restraint poles in freezing cold or searing heat, as happened recently in some U. S. prisons. The same philosophy extends to families: I was astonished to find that one can order spanking rods—a Speak Softly Spanking Stick, for instance—on the Internet, for administering biblically sanctioned punishment to one’s child.

Cusac links changes in attitudes toward punishment to changes in American culture. After the American Revolution, for example, the former colonists mitigated the harsh penalties imposed under monarchical rule, finding lesser punishments more in line with their new democracy. She describes the evolution of reformist and anti-reformist movements as they swept across the nation and conflicted with one another.

What I found striking in this volume is the extent to which advances in behavioral science and pedagogical experience have played almost no role in the evolution of corrections: Sentencing policies and prison conditions stem from basic, often religious and primitive, attitudes and beliefs. The role prisons should play in our society is answered, most often, by the response to this question: Should offenders have their wills broken by pain and suffering, or do they retain some capacity for rehabilitation? As Cusac shows, we lean far more toward the former.

In some schools of thought over the years, human beings were considered capable of redemption; in others, human nature was considered sinful and meriting only punishment. There were brief periods when, under the sway of Enlightenment principles, reformers like Benjamin Rush opposed physical punishment and the death penalty in favor of hard labor and solitary confinement—then viewed as a less punitive means of helping criminals to reform. But over time, as punishment migrated from the public square to walled-off prison cells, these “reforms” morphed into abuses—what Cusac calls “punishment creep,” perhaps because prisons were hidden from public view.

In the 19th century, liberationist movements evoked conflicting ideas: Abolitionists organized to stop the whipping and bondage of slavery, while pro-slavers favored the use of pain to maintain domination. In the Navy before 1850, officers used flogging to maintain discipline; later on, reformers organized to make flogging aboard ships unlawful.

Throughout the book, prevailing philosophies of punishment seesaw back and forth as intellectual, political and religious tides wax and wane. Emerging science sometimes plays a role in the debates; backlashes to prevailing philosophies result in hardening or softening of attitudes. (Though attitudes seem to harden much more easily than they soften.) Cusac summarizes the work of scholars, commentators and law enforcement officials in order to arrive at generalizations describing different eras.

But, perhaps because the ebb and flow of ideas is itself untidy and irregular, in some chapters the book skips and hops unevenly from one thing to another. Cusac quotes Source 1 saying A, Source 2 saying B, Source 3 saying something else. I wanted a firmer hand on the tiller in such places. A chapter that aims to show how the urge to punish surged in the 1970s cites Time and Newsweek on the wickedness of Generation Xers; gives blow-by-blow accounts of the plots of “Rosemary’s Baby, “The Exorcist” and “Carrie,” movies that portray a powerful devil; and describes the conservative backlash against the liberal movements of the ’60s like feminism and gay liberation. With “evil” alive and abroad in the land, societal problems are blamed not on racism or poverty, but rather on bad individuals and drug “fiends,” an underclass whose personal vices lead to crime. This climate of opinion provides fodder for neoconservatives to justify longer sentences, harsher prison conditions and larger expenditures for new prisons. It may be that Cusac’s pop history is on the money, but it seemed a little glib and I wasn’t quite convinced.

But there is no discounting the lasting influence of the vengeful Protestant ethos. This attitude lives on, epitomized by the little-known Christian Reconstructionist movement, which advocates a theocracy in which sins like blasphemy merit death by stoning or burning alive. Cusac links this movement to Oklahoma Sen. Tom Coburn, who has said that he favors the death penalty for doctors who perform abortions.

My criticisms of her work are relatively minor: In writing about the short-lived movement for prison reform of the early 1970s, Cusac misstates the title of Jessica Mitford’s exposé of prisons, calling it “Kind and Unusual Punishment.” The correct title is “Kind and Usual Punishment,” Mitford’s ironic take on the corrections industry and its failings. More generally, when Cusac relies on selections from many diverse sources, the resulting argument feels a bit mushy. By contrast, where she relies on her own years of reporting, the book takes on real power. Her linkage of the abuses of Abu Ghraib to American correctional practices is a case in point—the atrocities at Abu Ghraib, even threatening inmates with dogs, had happened in American prisons. “George Bush said he was exporting democracy to Iraq,” she writes, “but he seems to have exported a much uglier aspect of American public policy—some of the most sadistic practices employed in the U.S. prison system.”

Her chronicling of severe injury and death to inmates from new technology shocks the conscience—stun belts, tasers, restraint chairs, supermax isolation … she cites names and circumstances of outrage after outrage. Back in the 1970s, when I was a newbie reporter writing about brutality behind bars, I thought that if the public only knew that terrible cruelty was taking place, there would be an outcry and corrections officials would have to change their ways. I don’t think that anymore. There is no powerful constituency, no high-paid K Street lobby, no fat source of campaign funding from those who want to reform our prisons. And though Cusac says her book demonstrates the hazards of ignoring the current situation, it is difficult for me to see how it will help to bring about much-needed change. People don’t care enough about the thousands of inmates in solitary slowly going insane, week in and week out. In fact, a politician who is seen as being soft on criminals stands to lose big—remember Michael Dukakis and Willie Horton?

But I am encouraged by Sen. Jim Webb, D-Va., who recently spoke out against our useless, expensive and counterproductive incarceration establishment. As he says, it is a system of “chaos and mismanagement” that wastes billions of dollars as it creates “violence, physical abuse and hate.” Anne-Marie Cusac’s book helps to explain how we got to this awful pass.

Find Cruel and Unusual: The Culture of Punishment in America at Amazon.com.