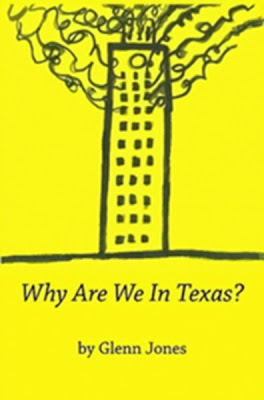 A dark psychedelic flashback:
‘Why Are We in Texas?’

Glenn Jones’ epic yarn, Why Are We in Texas?, is not so much a nostalgic stroll down memory lane as it is an LSD flashback. Drawing on over 60 years of Austin counterculture, it starts on that fateful day in 1966, when Charles Whitman rained hot lead down upon the campus, and ends a (disturbingly) few years in the future at that same, uber-symbolic building: the University of Texas Tower.

In a flash-forward prologue, Texas actually secedes from the United States, setting off a war that pits well-armed Tea Party types, bikers, the National Guard, Aggies, cowboys, gay revelers, liberals, soldiers from Fort Hood, and assorted others in a wild free-for-all of blood and guts. The “big-haired Governor,” the secessionist leader, avoids harm by cross-dressing and escaping on a motorcycle. Jones’ vision of the future is beyond dystopian; it reads like a bad acid trip. (You probably had at least one of those. I know I did.)

Between the beginning and end, the story revolves around Lon, a familiar enough denizen of the Austin underground, who, at the outset, is an underachieving UT student who spends more time discussing esoterica — and paranoid fantasies — in the Chuck Wagon at the Texas Union than he does on his classwork. The naturalism of the social scene, and indeed most of the novel, is in jarring contrast to the opening and closing sequences, which sometimes don’t seem to be part of the same story.

I was reminded of Billy Lee Brammer’s The Gay Place and Hunter Thompson’s Fear and Loathing in Las Vegas in equal measures. It is clear that Jones, a former contributor to The Rag, The Rag Blog’s print media predecessor, didn’t get any of his story ideas from books at the library; he obviously lived it from the inside, ate it up and swallowed it whole.

We are immersed in hippie culture, with all the drugs, booze, free sex, and radical politics that we could ever want. It feels authentic because it is authentic, as anyone who lived in Austin during those decades can attest. The iconic locations are all there: The Plantation, Les Amis, Vulcan Gas Company, Armadillo World Headquarters. And Lon’s residence is a spot-on depiction of the Ghetto, that legendary bastion of counterculture at its most awesome.

The main characters are recognizable, resembling people we all knew, or maybe still know. If you look closely enough, you may see yourself in there somewhere. We encounter rock stars Janis Joplin and Roky Erickson, filmmaker Eagle Pennell, writers Bud Shrake and Billy Lee Brammer, in a mix that somehow summarizes the whole shebang, that attempts (with considerable success) to put the entire Austin experience down on paper. If you can remember the Sixties and Seventies, it has been suggested that you didn’t really live them. This book will help you fill in the gaps in your memory.

It is so Austin-centric, however, that I wonder if readers who live elsewhere will get it. There’s a lot to be said, I suppose, for being time/place specific. It’s a staple of good storytelling. And for those potential readers who have never lived in Austin, I offer my sincere condolences. This book will serve as a primer.

Our hero and his many friends grow up, get married and divorced, screw around on each other, drink too much, smoke too much, party too much, get real jobs, and do all the things that make life happy and miserable simultaneously. Time passes; shit happens. Lon wants to write but never seems to get it together, and he is sometimes hard to like, especially when he’s slamming his wife through the sheetrock in a drunken rage.

In the epilogue, which matches the prologue in tone and paranoia, Lon’s dark side seems to win out. Regarding a stolen nuclear bomb brought up the Colorado River by boat from the Gulf of Mexico and buried on a farm, suspension of disbelief is a big stretch, but let’s give Jones the benefit of the doubt. After all, this is a paranoid fantasy, like many spun out over endless cups of coffee at the Chuck Wagon.

Which makes me wonder: Is that really what it’s been about?

In all, Why Are We In Texas? is a fast, fun read, especially for those of us fortunate enough to have been a part of the culture Jones so accurately depicts. I’m just hoping for a happier ending in real life.

[Gary Chason is an Austin-based independent filmmaker, actor, screenwriter, playwright, and stage director. His article, “Sexual Freedom League: The Naked Truth” was the cover story in the second issue of The Rag, August 17, 1966.]