BOOKS / Harry Targ : The Struggle Continues in the Global South 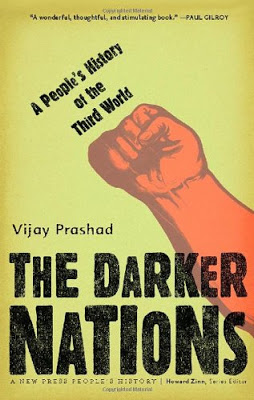 The struggle continues:
People’s history and the Global South

From the streets to the classroom

I am teaching a course this semester on United States relations with the Caribbean and Central America. I use the course to explore the historic patterns of United States foreign policy from the industrial revolution to the present. I open the course with reference to Greg Grandin’s thesis that U.S. conduct in the Western Hemisphere has served as a template or experiment for its global role as an imperial power.

The course also examines the rise of dependent capitalist regimes in the region but most importantly resistance to the Colossus of the North. Course discussion includes assessments of revolution in Haiti, Cuba, Chile, Nicaragua, and El Salvador and how the United States sought to forestall them and undermine their successes.

This time I chose as the first text a book that reframes world history from a “bottom-up” perspective. I am using Vijay Prashad’s book, The Darker Nations: A People’s History of the Third World, which presents a view of twentieth century world history that gives voice to the peoples of Asia, Africa, and Latin America.

It turns out that the Prashad book has become extraordinarily timely (I make no claims about whether my students agree or not) in that it describes in historical and theoretical terms the rise of what we used to call “Third World,” or what he calls “The Darker Nation,” beginning with the era of global colonial empire.

It identifies leaders, nations, movements, organizations such as the Non-Aligned Movement (NAM), policies, successes and failures. Although it was published in 2007, it leads the reader to reflect on the burgeoning mass movements today in the Middle East, suggesting pitfalls and possible strengths in terms of global progressive social change.

The rise of the Third World: An historical project

Prashad’s book identifies three periods of the history of the Darker Nations that he identifies in chapters as “Quest,” “Pitfalls,” and “Assassinations.” In each period there are dominant actors — individuals and nations, visions, policies, and patterns of interaction with rich and powerful countries.

The chapter Prashad called “Quest” summarizes the coming together of anti-colonial movements and the successive victories that occurred against the European colonial powers that occupied much of the world’s land mass from the mid-nineteenth century until the end of World War II.

“Quest” begins with an interesting discussion of the meeting of the new League Against Imperialism held in Brussels in 1927. It is there that the Third World project is formulated. It is a project inspired by communists, socialists, and nationalists who abhorred colonialism and sought to build a global movement to overthrow it.

In subsequent chapters Prashad traces the development and institutionalization of the movement, from anti-colonial struggle to independence to the drive to establish a Third World bloc that would stand between western capitalism and Soviet socialism.

The early leaders of this movement were the leaders of independence in their own countries: such figures as Jawaharlal Nehru (India); Ahmed Sukarno (Indonesia); Marshall Tito (Yugoslavia); and Gamal Abdel Nasser (Egypt). These and other leaders, representing countries from Asia, Africa, Latin America, and the Middle East, had diverse political ideologies but all supported political sovereignty and economic development. In general, their vision was a social democratic one.

For a time, given the East/West competition the Third World Project had some influence on debate and policy primarily through the United Nations. The Third World Project advocated for a New International Economic Order (NIEO), designed to regulate and control unbridled global capitalism. As the Socialist bloc deconstructed the advocacy for the NIEO declined.

Prashad discusses a second “stage” of the Third World Project that surfaced in the 1970s and beyond. The movement of Darker Nations becomes compromised by the rise of political elitism, bureaucratization, the demobilization of masses of people, the crushing of left forces, the rise of particular institutions such as the military that challenge grassroots politics, and the failure to bring rural agricultural reforms to the process of modernization.

Perhaps most important to the Prashad narrative is the growing debt crisis, the incorporation of many Darker Nations into the grip of the International Monetary Fund and the World Bank, and the rise of a new generation of post colonial elites who did not share the passion, vision, or experience of their predecessors.

The third part of Prashad’s book, loosely covering the 1980s to the present, he calls “Assassinations.” It describes, through case studies, the continuation of the deformations of the Third World Project described above. The “neoliberal” policy agenda embraced by many leaders reduced the role of states in shaping their own economies, deregulated and downsized public institutions, opened economies to foreign investors, and shifted from production for domestic consumption to export-based economies.

Gaps between rich and poor grew and as a result political institutions, particularly armies and police, became more repressive. However, a few regimes experienced economic growth, the so-called “Asian Tigers” for example. Others, Saudi Arabia being a prime example, supported and fostered on a global basis religious fundamentalism and ethnic hostilities to debase and virtually eliminate the unity embedded in the original vision of the Third World Project.

The project of the Darker Nations today

What we have witnessed over the last 20 days perhaps constitutes what Preshad might regard as a new stage in the development of the Third World Project.

First, the Middle East revolution, if we wish to call it that for shorthand reasons, can be seen as a direct reaction to the profound global economic crisis that has been brought on by neoliberal globalization.

Second, it clearly is motivated by goals similar to those NAM endorsed in the 1950s, that is some kind of New International Economic Order.

Third, the movements seem to be largely secular, perhaps reflecting a rejection of the counterrevolutionary programs of Third World elites who promoted division and reaction to further their own interests.

Fourth, the movements appear to incorporate vast numbers of young people, men and women, workers and small business people, intellectuals and artists, as well as those who identify with their religious traditions.

Fifth, the labor movement and the growing percentages of unemployed and underemployed workers have been playing a passionate and committed role in the struggles. The estimated 40 percent of the world’s population in the so-called “informal sector” have a stake in revolutionary change as do workers in transportation, electronics, construction, and manufacturing.

Sixth, this revolution is a nonviolent revolution. “Revolutionaries” are saying no or enough, and are doing so in such numbers that the institutions of government and the economy can not continue to operate. This culls up memories of the Gandhi struggles against the British empire and the civil rights movement in the U.S. South.

Seventh, this is an electronic revolution. As a result of the computer age time and space as factors confounding communicating and organizing have been eliminated. Cell phones and social networks do not make revolutions but they facilitate the kind of organizing that historically was more tedious and problematic.

In a recent interview Prashad summarized some of these elements of the ongoing struggles:

The Arab revolt that we now witness is something akin to a “1968” for the Arab World. Sixty per cent of the Arab population is under 30 (70 per cent in Egypt). Their slogans are about dignity and employment. The resource curse brought wealth to a small population of their societies, but little economic development. Social development came to some parts of the Arab world…

The educated lower-middle-class and middle-class youth have not been able to find jobs. The concatenations of humiliations revolts these young people: no job, no respect from an authoritarian state, and then to top it off the general malaise of being a second-class citizen on the world stage…was overwhelming. The chants on the streets are about this combination of dignity, justice, and jobs” (MRZINE Monthly Review.org, February 4, 2011).

Some of the differences from before

Comparing the period of the Third World Project with today suggests some differences and similarities. As Prashad and other historians of the Third World make clear, the rise of the non-aligned movement gained some influence because of the Cold War contest between the Soviet Union and the United States.

Now the world consists of a variety of new powers, some from the original movement (such as India, China, Egypt, and Brazil) whose economic, political, and military capabilities are challenging the traditional power structures of international relations. Also, global capitalism is in profound crisis and the causes of the revolutionary ferment as well as its escalation are intimately connected with the Middle East revolutions.

Today the danger of escalating state violence and repression remains significant. Global capitalism is in crisis. Some third world regimes are still driven by fundamentalisms of one sort or another. And, finally, key decision makers in centers of global power seem committed still to archaic ideologies, for example suggesting that Islamic fundamentalism will take over revolutions, democracy is dangerous, and that the one “democracy” in the Middle East, Israel, will be further threatened by the movements in the region.

In addition, the Egyptian revolution, while exciting and inspirational, suffers from some of the same weaknesses Prashad described at the dawn of the Third World Project. Looking back 50 years, the leaders, and the various participating sectors of the mass movement, had not articulated a systematic and compelling ideology, beyond the programmatic demands of the NIEO.

Several countries in the forefront of the NAM were military regimes. Placards of Nasser were prominently displayed in Liberation Square last week. Nasser was a military leader of the “Free Colonels” movement that overthrew King Farouk in 1952. The same “revolutionary” military created a Hasni Mubarak many years later. While the military in Egypt today may act in ways that curry the favor of the protesters, it must be clear that military institutions are driven by their own interests, not the interests of the people.

So the mass mobilization of the last 20 days that is so exciting, inspiring hope for the world, is fraught with danger. The people now must struggle to articulate, advocate for, and institutionalize a program of humane socialism in every country where they are victorious. The task of progressives in the Global North is to support the new project and to link its causes and visions to the struggles that are experienced everywhere.

1 Response to BOOKS / Harry Targ : The Struggle Continues in the Global South