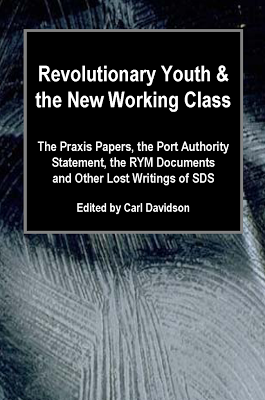 Carl Davidson has done a tremendous service to anyone who studies the history of social movements or anyone interested in the 1960s rebellion. This “lost” collection of papers reveals the depth and richness of radical thinking coming out of the student movement as the war raged in Vietnam and militant protestors marched through the streets of America.

The most important document is the “Port Authority Statement,” by SDS members David Gilbert, Robert Gottlieb, and Gerry Tenney. Although at the time not widely circulated, it offers great insight into the thinking and analysis of SDS as it turned to revolutionary theory and debate. This is an impressive document, detailed in statistical and economic analysis, grounded in revolutionary social theory, and innovative in its thinking and insights.

One of the most important sections of the paper was its class analysis with its focus on the new working class and the relationship of students to an economy shifting from manufacturing to services and technology. The document notes that, “Modern American capitalism is characterized by rapid technological change with scientific knowledge growing at a logarithmic rate.” This will result in the “elimination of unskilled labor (as) the blue-collar sector will decrease (and) jobs that require high degrees of education and training” will increase. (pages 88-89)

That analysis was made in 1966. Now read a recent article by Edward Luce from the Financial Times (Dec. 11, 2011) : “the middle-skilled jobs that once formed the ballast of the world’s wealthiest middle class are disappearing. They are being supplanted by relatively low-skilled (and low-paid) jobs that cannot be replaced either by new technology or by offshoring — such as home nursing and landscape gardening. Jobs are also being created for the highly skilled, notably in science, engineering and management.

Continuing its class analysis the Port Authority document examined the capitalist class and the debate over ownership and control. The authors focused attention on the growing trend towards paying executives with large stock rewards, merging management and ownership.

Again we can turn to a recent article by Richard Peet, published in the December 2011 Monthly Review that reads, “More recently, David Harvey has argued that ownership (share holders) and management (CEOs) of capitalist enterprises have fused together, as upper management is increasingly paid with stock options.” This “recent” argument now being made by a leading Marxist trails Port Authority by some 45 years.

Although the authors grasped the sweeping impact that technology would have on American workers, what they could not see would be globalization and the advent of neoliberalism as a governing ideology.

As the paper noted at the time, “Corporate liberalism implies that the dominant economic institution is the corporation and that the prevailing political and social mode is liberalism.” (page 68) Of course it’s understandable how such changes would be all but invisible in 1966; it’s also a good reminder why political tactics and strategy must remain flexible and activists should always be willing to reevaluate their analysis.

The above are but a few of the enticing insights that are contained in page after page of these documents. As new social movements gather force throughout the world, a look into the thinking of activists from the last great social movement can help give direction to coming future battles.

I would highly recommend this book to all activists and academics interested in building a better world.

[Jerry Harris is National Secretary of the Global Studies Association and author of The Dialectics of Globalization.]

Find articles by Carl Davidson on The Rag Blog.