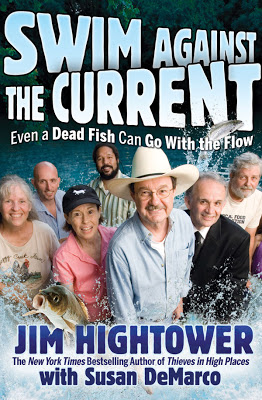 ‘Texas has produced some of the most arresting progressive voices of the last generation. Working against the state’s Rightward flow, they have harkened to its populist tradition’
By Jonathan Rowe / August 20, 2008

There is something to be said for writing in a hostile political environment. You can’t coast on prevailing opinion. You have to use your wits.

This is one reason Texas has produced some of the most arresting progressive voices of the last generation. Working against the state’s Rightward flow, they have harkened to its populist tradition. They are funny and a little outrageous. They have swagger, and tell stories.

The late Molly Ivins was an exemplar. So too is Jim Hightower, who followed Ivins at the Texas Observer (what a run) and like her is a high-spirited practitioner of the art of givin’ em hell.

Hightower grew up in Texas. He served two terms as the elected state commissioner of agriculture. (He was unseated in a campaign run by Karl Rove.) Now he’s a radio commentator and syndicated columnist, with a knack for the backcountry zingers that cut the big shots down to size. “If ignorance ever goes over forty dollars a barrel,” he has said, “I want drilling rights to George Bush’s head.”

Most of Hightower’s work has aimed at corporate miscreants and their enablers in high places. Now, in Swim Against the Current, he’s writing (with his partner Susan DeMarco) about Americans who are bucking the system and making a difference.

Reader’s Digest is the nation’s number two publication (after the AARP magazine) for a reason. We like stories about people who overcome adversity, and who don’t wait for government help. Ronald Reagan understood this. Hightower does too, though from a different standpoint.

In Swim, he and DeMarco show that self-help can be about “we” as well as “me.” They tell the story of Chris Johnson, for example, a young pharmacist in Johnson, Texas, who left a lucrative job at a chain pharmacy to start his own that sells low cost meds to people without insurance. “I knew how much the drugs really cost us and that the profit margins were obscene,” he says. “Now I’m back doing what I went into pharmacy to do—helping people.”

There’s not much policy talk here, and no lists of what the next president should do. Instead, we meet ordinary (in a sense) people like Johnson who are trying to live their values and make a difference. Another example is Organic Valley, a farmers’ co-op in Wisconsin that refused to bow to Wal-Mart’s price demands and lived to tell about it. Another is the Union Cab Company in Madison, Wisconsin, created by former drivers for the anti-union Checker Cab.

Hightower understands the difference between authentic enterprise and corporate elephantiasis. He also understands the kinship between the entrepreneur—especially the socially motivated one—and raucous, Alinsky-style community action. ACORN members in Gary, Indiana, for example, brought a greedy utility company to heel by lining up to pay their bills in pennies. They are bucking the system, much as Chris Johnson is.

Most of the stories in Swim suggest clip files rather than on-the-ground reporting. Still, I was glad to learn about these people. The inspirational mode does pose a problem for Hightower, though: how to get off the zingers at the bad guys when he’s talking about the good ones.

His solution is frequent resort to straw men, in the form of unnamed pundits, experts, and corporadoes who serve as polemical foils. The device becomes formulaic; he’d do better to tell his stories straight. More significant is the tendency to gloss over difficulties. We need inspiration, yes. But we also need to learn how people deal with setbacks. The Organic Valley co-op almost fell apart, for example. Hightower mentions this but doesn’t dig into it. Yet it’s the part we most need to understand if we are going to try to follow their example.

Then there’s Whole Foods. It’s an easy target. I’d prefer a world of independent local merchants, too. But the chain really has brought critical mass to organics, and not just on behalf of factory farms. In his discussion of Organic Valley, Hightower lets drop that one of the co-op’s major customers is … yes, Whole Foods. What are we to make of that?

Finally, I wish that Hightower had been more willing to ask his readers to look into the mirror. He has a long section, for example, on evangelical environmentalists, in particular Reverend Rich Cizik of the Evangelical Environmental Network. Hightower is right to challenge those on the Left who dismiss Christian activists out of hand. The tone is admiring and respectful.

But there is a self-satisfaction too, that someone such as Cizik has seen the environmental light. Does Cizik have a light that we need to see as well? Do the fellowship of the churches, the spiritual depth of the gospel text, the call to service rather than convenience, offer something that secular environmentalists could learn from? Discomfort is the nerve ending of growth. While we give the corporadoes hell, maybe we need to cultivate a little for ourselves.

[Jonathan Rowe wrote this review as part of A Just Foreign Policy, the Summer 2008 issue of YES! Magazine. Jonathan Rowe is a YES! contributing editor, a fellow at the Tomales Bay Institute, and co-director of West Marin Commons.]

Find Swim Against the Current at Amazon.com.