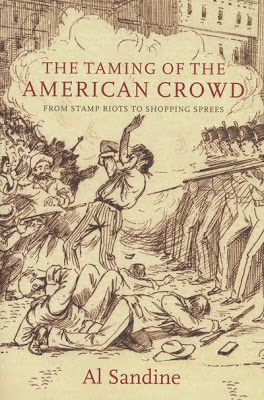 The Cyber Crowd:
Reinventing the Crowd for the Age of Cyberspace

Near the end of his thought-provoking, timely book about the role of the crowd in history, Al Sandine writes that, “the disembodied realm of cyberspace is the very antithesis of a culture of crowds.” I hear what he’s saying. I think I know what he means.

But is his statement true? Have we as a culture actually come full circle? Have our contemporary aggregates of human beings truly turned into the opposite of those electrifying crowds that dominated the 19th-century and that the German philosopher Friedrich Nietzsche called “the century of the crowd.”

I have known large and small, angry and reverential crowds over the course of my lifetime, and many of the crowds I have known Sandine describes vividly in The Taming of the American Crowd. The crowd is, of course, mercurial and fickle. It takes its coloration from the culture and the society around it. It can be revolutionary or racist, and it can lynch just as well as it can adulate.

For centuries, large groups of human beings who gathered in the streets, who demonstrated, and who marched on buildings like the Bastille in Paris, and the Winter Palace in St. Petersburg, were defined as “the mob.” And the mob was regarded for the most part by journalists, historians, czars and kings as hateful, irrational, and self-destructive.

One of the earliest and one of the most insightful books about the insanity of crowds is still Charles MacKay’s 1841 study, Extraordinary Popular Delusions and the Madness of Crowds. Most of the studies of the crowd in the 19th century were written from the point of view of the aristocrats and the bourgeoisie. They weren’t on the side of the downtrodden and the outcast.

Then, along came Karl Marx and Frederick Engels who recognized the vital role of human beings acting together to change history through peasant rebellions, and working class strikes and riots. In the 1960s, a group of historians, many of them English, such as E. P. Thompson, Eric Hobsbawm, and George Rude, followed in Marx’s footsteps, wrote “history from the bottom up,” and turned the mob inside out.

To Thompson, Hobsbawm, and Rude — who wrote two transformative works, The Crowd in History and The Crowd in the French Revolution — crowds were politically conscious groups of individuals united by common experiences and common goals. They were savvy not stupid, mindful not mad. To the new, leftwing historians, crowds were the heroes of modern times, and their work inspired the students and the activists of the 1960s.

Indeed, the civil rights demonstrators and protesters, and the and anti-war crowds of the 1960s seemed to be a continuation of the popular insurrections of the 19th and the early 20th centuries, when workers sat-in to demand the right to organize in unions. In the 1920s and the 1930s, the two most effective and creative magazines of the bohemian and the radical left were entitled The Masses and The New Masses. To belong to the masses was something to be proud of.

Then, something dramatic happened: the masses lost their appeal and their teeth. Sandine tells the story of the “taming of the crowd” in crystal clear prose that has real punch. He roams all over the United States and Europe; he goes back to ancient Roman times, too, and draws parallels between the era of the emperors in Rome and the popularly elected officials in our own day and age.

He shows how mass society diluted the power of the masses, and how the mass media alienated and fragmented the citizenry. Add malls to TV, mix in the advertising industry and public relations, and the result is a consumerist society in which rebellion is turned into a strategy to market good and services. This book provides valuable social and cultural criticism.

Sandine is both more optimistic and more pessimistic than I am. I am not yet ready to say as he does that, “the disembodied realm of cyberspace is the very antithesis of a culture of crowds.”

Cyberspace can be a place to educate, mobilize, and build a sense of community. It can be a stepping-stone toward physical proximity in the same time and place for the purpose of protest and rebellion. So, in that sense I am hopeful about the possibilities for cyberspace, which like all spaces in our society can be contested space, and space that we ought not to surrender without a struggle.

But I am also less sanguine than Sandine when he describes the progress that has been made since the 19th century. “In the United States today, there are no buyers for the kind of crowds that once served powerful interests,” he writes. “No one rents a crowd to drown out the speech of an opponent… No one furnishes liquor, food, and pyrotechnics to partisan parades, as politicians did in nineteenth-century.”

I suggest that Glenn Beck, Karl Rove, and the tea-baggers of today are as insidious as any demagogues of the past, and that crowds today are bought, sold, and manipulated. The roar of Fox is used to drown out opponents. Fireworks and spectacles divert the attention of voters from genuine social problems.

Near the end of his book, Sandine points out that about 2,000,000 people attended Obama’s inauguration and that “there was not a single arrest.” He notes that the crowd was characterized by “docility.” I would have said that it was characterized by respect, and that many if not most of the people who attended were proud of the fact that America, which had long been a racist society and still is in many ways, had overcome its racism and elected an African American as president. The racist mob had turned into a crowd proud of its transcendence of bigotry.

What seems to be true of crowds is their unpredictability. They are alive, volatile, and protean. I can still feel the sense of exhilaration of being in the streets of Washington D.C. during the War in Vietnam, along with one million other Americans to demand that American troops come home and that the bombing stop. That was a time. It was a terrible time, and it was a wonderful time too, when to be in the thick of a crowd was to be truly alive and a part of history in the making.

As the British historian Eric Hobsbawm noted a year ago in the Spring of 2009, the present global crisis demands that, “Whatever ideological logo we adopt, the shift from free market to public action needs to be bigger than politicians grasp.”

[Jonah Raskin was the Minister of Education of the Youth International Party. He teaches media law at Sonoma State University.]