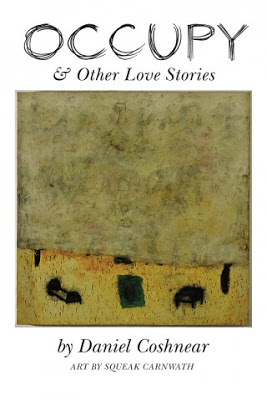 As contemporary as the latest tweet, Coshnear’s men, women, and children cry out for the lost soul of America itself.

The characters in Daniel Coshnear’s political short stories read Stephen King and Raymond Carver. They smoke Camels and marijuana, drive Sentras, work at Safeways, and as school janitors. Preoccupied and in denial, they’ve survived trauma and now they’re suffering from Post-Traumatic Stress Disorder and a host of social and psychological ills.

As contemporary as the latest tweet, Coshnear’s men, women, and children cry out for the lost soul of America itself.

The 12 stories in Occupy and Other Love Stories take place in Santa Rosa, California, and along the Russian River in Sonoma County, though one is set in New York, and the very last conjures up Berkeley during the Occupy Wall Street Movement last spring. It’s an overtly polemical tale and might well be called revolutionary romanticism.

Coshnear’s heart is with the rebels and the in-your-face citizens who refuse to be silenced or sit still. For the most part, however, his characters don’t give speeches or march in the streets. They’re part of the 99% and too busy dealing with death, divorce, depression, and suicide to be distracted by leaflets, posters, and slogans.

Years from now a Ph.D. student writing about the culture of the Occupy Movement will surely point to Occupy and Other Love Stories as an example of the fiction that emerged from the protests against Wall Street immorality and criminality. It’s also fiction that stands on its own merits without ties to Occupy or any social movement.

Coshnear’s stories are compact with vivid descriptions of people and places, and with crisp dialogue that’s practically audible. Reading them is like watching a series of video clips that depict domestic life with images of Iraq on TV, and real cops lurking on the sidewalk outside the front door.

Parents and children inhabit “Early Onset” and “Custodian” in which a father and his son disconnect and then reconnect. Love, sex, and relationships animate “Avulsion,” “Borscht on the Ceiling,” which takes place in New York, and “Occupy” — the title story — in which a professor finds romance with a student.

The characters play their own roles, and speak their minds independently of the author, though sometimes he analyzes them and even describes the medications they take, as in “You Can Put Your Name on It, If You Want to.”

Pills help the characters, though they long for more than legal and illegal drugs. They want to know the answers to all the big questions, such as “if bad things happen to bad people,” and if their own children might one day inhabit “a better world.”

[Jonah Raskin, professor emeritus at Sonoma State University, is an author and a frequent contributor to The Rag Blog. Read more articles by Jonah Raskin on The Rag Blog.]