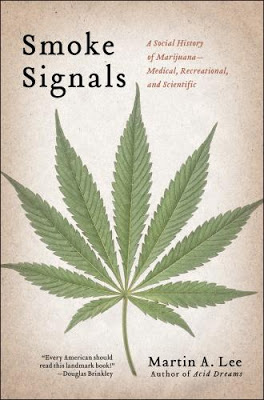 On a Friday afternoon, Martin Lee sips an espresso at Flying Goat Coffee in Healdsburg, California, 90 minutes north of San Francisco, where he lives with his wife and children. Outside, on the sidewalk, a couple of locals — a man in sunglasses and a woman wearing a floppy hat — are talking about their outdoor marijuana crops and the harvest which is still months away.

“This is definitely a marijuana town,” Lee says. “There are a lot of people who grow it in their own backyards and who smoke it both medicinally and recreationally.” He adds, “I don’t really see a big divide between medicinal and recreational users. That’s the government’s model, not mine, and I don’t think it ought to be the model for the movement to reform marijuana laws.”

The publication of Lee’s new in-depth, comprehensive book, Smoke Signals: A Social History of Marijuana – Medical, Recreational and Scientific, coincides with the federal government’s on-going assault on California marijuana dispensaries, growers, and dealers, many of them in compliance with state law.

This spring, in Oakland, agents raided Oaksterdam University, which billed itself as the starship school for the marijuana industry. And in Oakland right now, federal authorities are aiming to close Harborside, probably the biggest above-ground marijuana emporium in the United States. Steve DeAngelo, Harborside’s CEO — a former Yippie — is fighting the government tooth-and-nail. He’s found support recently from Oakland Congresswoman, Barbara Lee (no relation to Martin Lee), who wants to keep Harborside and all California dispensaries open for business.

Martin Lee follows these developments like a hawk. They’re too recent to appear in his book, but Smoke Signals is probably the most up-to-date, balanced book about marijuana in print. The politics of pot — the clash between pot prohibitionists and pot liberationists — prompted Martin Lee to write Smoke Signals, but once he began to conduct his research it was the science of pot that really piqued his interest.

“I’m fascinated by the whole cannabinoid system, the cannabinoid receptors in the human body, and the chemistry of cannabinoids, too,” he says. “I have long been interested in THC, the chief psychoactive chemical compound in cannabis, but I’ve become interested in CBD, which doesn’t get you high or make you feel stoned, but is helpful for all kinds of medical conditions, including anxiety.””

Lee discovered illicit drugs in the 1960s. He’s never left them far behind, and while he smokes marijuana, and writes when he’s high, he doesn’t smoke when he’s on the road. It’s too risky, he says. He doesn’t pack weed in his suitcase and he goes for weeks at a time without craving marijuana. “I like weed,” he says, “But it’s no big deal to go without it.”

Born in Westbury, on Long Island, New York, in 1954, he says that he “caught the tail end of the 1960s,” but he hit the tail end of the Sixties hard and fast. While he never joined Students for a Democratic Society (SDS), he attended SDS meetings and listened to SDS members spout politics, power, and the elite.

“It was like someone turned on a light in my head,” he says. “I remember listening to a talk at an SDS meeting about LBJ’s Secretary of Defense, Robert McNamara, and telling myself, ‘So that’s how the power elite works.’ I’ve never been a conspiracy theorist. The SDS guys were not talking about conspiracies, but the behind-the-scenes nitty-gritty workings of power.”

Soon afterward, Lee met Carl Oglesby, who had been the president of SDS in 1965 and 1966. They became pals, took acid together and tripped. Lee also began to smoke pot, learned to roll joints, and enjoyed the sensation of being high.

“For me, politics and pot have always been entwined,” he says. “They branded me from an early age and they never left me.” At the University of Michigan, he studied philosophy, then turned to the study of LSD, and with Bruce Shlain wrote and published in 1986 his first book, which is now a classic, Acid Dreams. It’s still in print and has never gone out-of-print.

In 1990, he published, along with co-author and friend, Norman Solomon, Unreliable Sources, A Guide to Detecting Bias in News Media. Lee consulted with Solomon on his recent (unsuccessful) campaign for Congress, and urged him to endorse the legalization of weed. Solomon didn’t need to be arm-twisted.

“With cannabis is always yes and no,” he says. “I know people who smoke it and feel euphoric. I know others who have used it and became suddenly paranoid and felt terrible.” He adds, “You can also see the doubleness in the movement to reform marijuana laws. Activists swing back and forth from feeling that it’s going to be legalized tomorrow, and on the other hand that the forces against legalization are so entrenched that it won’t ever be legalized.”

Recent events seem to verify that doubleness. “In California in 2010, it looked like the prohibition against marijuana was finally going to end,” Lee says. “Now, in 2012, it looks like it’s not likely to end anytime soon. We’re in a very sober moment for the marijuana movement, though, of course, people are getting high all the time.

The DEA’s gang-busting tactics today don’t surprise Lee. Indeed, they remind him of Harry Anslinger, the long time drug czar, who launched the war on marijuana in the mid-1930s and directed it until the 1960s from his office in Washington D.C. To write Smoke Signals, Lee exhumed the 74-year history of marijuana prohibition in the United States, its up and downs, victories and loses.

He learned, too, what he suspected: that today, as in the past, the prohibition of marijuana keeps police officers busy on the beat, courts jammed with marijuana offenders, and prisons packed with prisoners convicted of violating marijuana laws. It’s a growth industry and it fuels what has come to be known as the prison-industrial-complex. 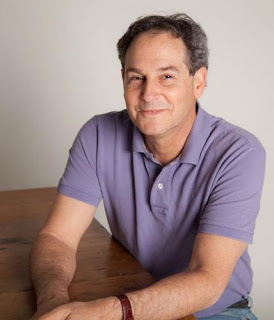 Author Martin Lee. Photo by Quincey Imhoff.
“It’s clear that if marijuana were to be legalized tomorrow, it would devastate police budgets,” he says. “Law enforcement obviously doesn’t want that to happen and they’re openly against the end of prohibition. I’ve also heard the argument that the tobacco and the pharmaceutical industries are against legalization. I don’t think they’re part of a conspiracy to keep cannabis illegal, though big tobacco gave money to D.A.R.E. and to Nancy Reagan’s ‘Just Say No’ campaign because it was good PR for them. I also think that if cannabis was to be legalized, the tobacco and alcohol industries would jump on the bandwagon.”

As a marijuana smoker, he’s a tad nervous these days, but he knows that now isn’t the time to duck and cover. Smoke Signals, which took four years to write, has thrust him into the public eye, and he’s eager to go on the road and talk about cannabis.

“When I’m interviewed, I hope I’m asked if I smoke,” he says. “Of course, I do smoke and I’m planning to say so. I like smoking pot. There’s nothing wrong with that. I don’t have anything to hide. I recently told my kids that I smoke, and that wasn’t a big deal for me or for them.”

Lee feels that cannabis has a vital role to play in a society, like ours, that’s running on stress 24/7.

“We’re bombarded by all kinds of crap, whether from the media or from the chemicals in the food we eat,” he says. “The overall effect of cannabis is therapeutic. It’s made to order for people who have anxiety and are tense. It turns down our over-excited nervous systems.”

Lee travels around the country and notices regional differences when it comes to cannabis. Northern California is a world unto itself.

“People in New York have very little idea of how big the cannabis industry is here in northern California,” he says. “They don’t realize that a heck of a lot of people grow, sell, and transport cannabis, that they cook with it, make tinctures from it, and that their doctors recommend it.”

Still, Lee isn’t optimistic about the immediate prospects for legalization and the end of prohibition. He’s also critical of some of the leaders of the movement to reform marijuana laws, though he doesn’t want to name names or single out anyone in particular for rebuke.

“Many of the leaders misunderstood the mixed signals of the Obama administration,” he says. “It’s time for some real soul-searching and re-examination of goals and strategies.”

But he’s not in despair, either, about the big marijuana picture. “People are gonna grow pot and smoke pot no matter what,” he says. “The crackdown on California dispensaries certainly hasn’t stopped people from using cannabis. It only means that they’ve gone back to buying it underground and on the black market. If I do get glum, I have to remind myself that we have thousands of years of marijuana history on our side. After all this time, it’s unlikely that humans are gonna give up their cannabis.”