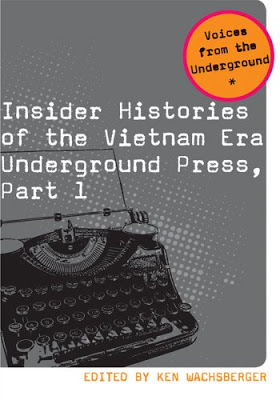 Let me say from the start that this is the most thorough and comprehensive book in print about the underground newspapers of the 1960s. Ken Wachsberger, the editor of the volume, sees the papers of the Vietnam Era as the forerunners of today’s radical blogs and so he means his book to be relevant for the current generation and it is indeed greatly relevant to today.

The authors of the essays — there are 14 of them — are almost all survivors of the Vietnam Era, and all of them are veterans of the underground papers. So, the book lives up to its promise to offer “insider histories.” No one could have written essays so passionate about the 1960s as those who lived the 1960s, and no one could have had memories as rich as these.

Victoria Smith (Holden), the author of the last essay in the book, died in 2008. Her essay is especially rigorous and offers a complex analysis of why the underground newspapers rose quickly and then fell quickly. Rather than summarize her in-depth criticism and self-criticism, I urge readers of The Rag Blog to dive into it for themselves.

Smith writes about Space City!, Houston’s countercultural paper, but many of her ideas apply to papers in other parts of the country that found themselves the victims of their own success. It wasn’t repression from the established order that ended Space City!, according to Smith, but rather the internal politics and philosophy of the paper itself.

Many of the underground papers ascribed to the notion of “permanent revolution,” and no newspaper can long function with that outlook on life. Some — perhaps even a great deal — of stability and order is essential to meet deadlines and publish on schedule.

All of the essays in Wachsberger’s volume are immersed in history and are intellectually vigorous. Reading them feels like being thrown back into the 1960s itself. Suddenly an essay will take one back to June 1967, or August 1969, and so the book as a whole feels vivid, immediate, and intense. It’s a real case of déjà vu.

The wealth of details is truly remarkable: not only dates, names, and places, but also the kinds of arguments that took place at meetings are vividly recalled. Moreover, the essays trace the month-by-month changes that took place in the political and cultural arena in the 1960s. With so much turmoil and upheaval, it is amazing that the underground papers were published as regularly as they were.

I think that Wachsberger’s book will be most valuable to those who want to keep the Sixties alive today as well as to those who weren’t alive in the 1960s but wish they had been there. Wachsberger’s fine anthology will transport them back to the offices of The San Francisco Oracle, The Great Speckled Bird from Atlanta, and to feminist papers like Off Our Backs.

There are also essays about The Guardian, which often seemed to be a part of the Old and not the New Left, and about Liberation News Service (LNS) that served as an alternative to the Associated Press (AP) and United Press International (UPI).

Harvey Wasserman, the author of the piece on LNS and a contributor to The Rag Blog, writes with much of the verve of the 1960s. “LNS was a joyous, thrilling, uniquely powerful rocket ship we got to ride, as a blessing of youth and of the rare brilliance of the time” he exclaims. “May we never lose the essential magic and humanity.”

Almost all of the essays in this book capture the innocence of youth in the 1960s, and the unusual historical brilliance of the era. There are trenchant criticisms here, but they are rarely petty or spiteful.

[Jonah Raskin is a professor at Sonoma State University and the author of For the Hell of It: The Life and Times of Abbie Hoffman. Read more articles by Jonah Raskin on The Rag Blog.]