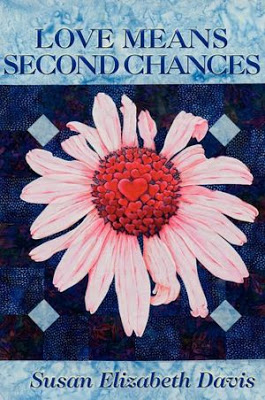 Susan Elizabeth Davis has written a self-consciously political novel complete with website and blog that she hopes will become a literary weapon in the pro-choice arsenal. At a time when women are having to defend themselves from humanist instincts straight out of the Dark Ages, her timing couldn’t be better. As a life-long activist for women’s rights, in particular to control their own bodies, she is the right person to write it.

Love Means Second Chances takes place in 1992 with flashbacks to 1972. Christy gets pregnant with Ramon even though she’s on the pill because for a brief period she was on antibiotics for strep and the antibiotics rendered the pill ineffective. Impending motherhood puts a crimp on Christy’s ambition to be an opera singer, not a pipe dream by any means as she is currently a student at Juilliard.

Christy tries to keep the news from Carole, her mother, a devout Catholic, because Christy’s game plan includes getting an abortion. To complicate matters, Christy herself is the result of an accidental pregnancy that Carole chose to not terminate over the objections of her impregnator-turned-reluctant-husband Jimmy, whose own dream of becoming a football player, along with Carole’s dream of becoming a nurse, was terminated by the pregnancy that wasn’t.

In addition to alienating her from Jimmy, Carole’s pregnancy led to a split between Carole and her father — her mother already was dead. So Carole became close to her mother-in-law, Mary Louise, a strong advocate of the woman’s right to choose, who supported Carole over her son Jimmy during Carole’s pregnancy and is now supporting Christy over Carole during Christy’s pregnancy even though the first case led to a non-abortion and the second is leaning toward an abortion.

The book revolves around the interactions among the three generations of women and their different responses to Christy’s pregnancy and decision to have an abortion. To Carole especially, it awakens long-suppressed anger that stemmed from her own pregnancy in 1972. Hence the flashbacks.

A side issue but one almost equally perplexing to the avid Catholic Carole is the announcement by her sister Liz, a divorced mother of three teenage boys, that she finally has found true love to Barbara — not, if you are confused, a man with a woman’s name.

The story begins during the Christmas season. In fact, it is Christy’s vomit attack in her parents’ bathroom Christmas morning that finally confirms Carole’s suspicion that Christy is pregnant.

The strength of this novel is less on the action than on the dialogue. Davis becomes every one of the women when they are speaking. She gets inside their heads and their hearts and enables them all to be sympathetic, believable characters. As a life-long feminist activist in abortion rights, there is no doubt where Davis stands on the issue of a woman’s right to choose. Nevertheless, she attempts to be fair with all of the women.

But she doesn’t confuse “fairness” with leaving the reader thinking that all positions are equal. Davis wrote Love Means Second Chances in order to be a voice for choice in the abortion debate. With confidence and no modesty, she admits that she wants her book to join the long list of those that have changed social conditions and perceptions, including Uncle Tom’s Cabin, The Jungle, Invisible Man, and The Women’s Room.

So, in a cathartic scene, Liz asks Carole, “Will you love [Christy] less if she has an abortion?” Carole admits she hadn’t even considered that line of thought but, no, of course, she would not love her less. “The pain in her heart felt like it was being ripped out of her chest. Giving in, Carole sobbed uncontrollably, gasping for air as her worst fears dive-bombed her like demons.”

Davis chooses this moment to place the Catholic Church’s opposition to abortion into historical perspective when she speaks through Barbara, who tells Carole

Before 1869, the Church did not consider abortion a mortal sin. In fact, during the Middle Ages Thomas Aquinas wrote that abortions could be performed until the time of quickening — when the baby begins to move in the fourth month. So it’s only been since the Church felt its power and influence were waning in the 19th century that it took a stand against abortion.

Abortion is as old as civilization. Women have been giving themselves abortions in every culture on every continent since the beginning of time… Abortion was the primary means of birth control in this country until it was outlawed in the 19th century. It was only after doctors began to specialize in gynecology and obstetrics and wanted to stop midwives from interfering with their business that it became illegal.

As a kicker she notes that Italy has the highest abortion rate of the European countries. “Those sisters are not afraid to take care of themselves if they don’t want to be pregnant.”

I can see the old men who head the Catholic Church hierarchy attacking the credibility of that entire scene. After all, who is it who is attacking Church doctrine? A lesbian! Whether intended or not, good for Davis for showing no fear here in mixing controversial issues.

But to her credit she never treats the abortion issue lightly. Davis agrees with anti-choicers who would argue that abortion can hurt women emotionally. A powerful scene takes place in Christy’s home when Carole comes over to talk after she has had time to cool off and reflect. As Christy prepares tea in the kitchen, Carole waits in the front room. They both pray to the same religious icon as they psych themselves up to represent different sides of the conversation:

Carole: “Holy Mary, Mother of God, help me… find the right words… to tell Christy that I love her, even though I don’t like what she’s doing.”

Later, in the clinic after the abortion, Christy waits with other women who have undergone the same experience. There is not a whole lot of laughing. As each woman is discharged, the attendant says, “I don’t want to see you here again” (as opposed to what an anti-choice novel might have the attendant saying: “Shall we make an appointment for your next visit?”).

Six months later, seemingly a long time after the abortion, Christy experiences an emotional breakdown when singing an aria from Madame Butterfly where Cio-Cio San gives up her love child and kills herself.

The message from these scenes is clear. Not every pro-choicer uses abortion as birth control. It is a painful process even for women who choose to undergo it. These women actually experience real feelings of grief, anger, and sadness. No one is evil and no one “wins.”

I have to admit I’m happy that Davis confronts the Catholic Church directly. I don’t care what practicing Catholics do relative to their own abortions or non-abortions. I do care that Catholics and other religious anti-choicers think they can tell Jews what to do about ours.

In Arizona, for instance, Governor Jan Brewer recently put her signature on a “life begins at menstruation” bill. The joke by Yippie Abbie Hoffman was that “Jews don’t believe a fetus has life until it gets its graduate degree.” A funny joke perhaps but, in the abortion debate, when life begins is a non-issue for Jews.

Menstruation, you say? Fine if that gives you some perverted thrill. But don’t deny women from my religious family the right to control their own bodies, as our religion permits, just because your religion claims that ownership of your women’s bodies should be in the hands of old men who supposedly don’t have sex.

Catholic law as argued by the hierarchy and their followers is absolute on the issue of abortion: “We don’t give a damn what it does to the woman; all power to the fetus.” The position on abortion in Jewish law is nuanced but it ultimately comes down to “The mother’s life comes first.” Catholics call what they want to practice religious freedom but when they force their mythology and their dogma onto us it becomes religious imperialism.

So which is better, fetus-first Catholicism or mother-first Judaism? There obviously is no correct answer to please everyone, which is why the First Amendment right to freedom of religion is so important. But that right doesn’t apply only to Catholics. If Catholic law has a valid place in the debate about health care, so must other religions, and no religion’s dogma should be enshrined in federal or state law to the detriment of any other.

I look forward to reading my first Jewish pro-choice novel. Love Means Second Chances is a model of how that can be done.

[Ken Wachsberger is a long-time writer, editor, political activist, and member of the National Writers Union. He is the editor of the four-volume Voices from the Underground series.