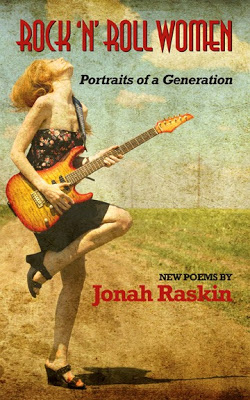 Jonah Raskin’s new poetry chapbook, Rock’ n ‘Roll Women: Portraits of a Generation, celebrates both rock and women equally and with great good will. Its 25 brief poems follow a simple formula like the guitar, bass, and drums of a rock trio: a woman (well, 24 women and one man), a rock artist from any era, and a moment in time defined by its soundtrack.

The poems were written for performance, accompanied by drums and/or stand-up bass, and reading them might seem a bit like reading CD liner notes, but they stand on their own nicely.

Of course Raskin isn’t alone in being influenced, personally and artistically, by the musical revolution that rocked the world in the late 1950s and continues to roll across the galaxy today.

If you weren’t alive before then, forgive me, but you just can’t know how bloody bleak it was. Don’t get me wrong, I still love a lot of Big Band-era music, classical stuff, C&W. But the thing is, every single bit of it was square, and we feared for a while that was all there was.

Yes, there was some jazz and some blues if you knew where to look, but you had to be some kind of egghead-kook to even look, and frankly, both genres can be awfully depressing, reflecting bittersweet, lost worlds of heroin and gin joints.

Folk music was a breath of fresh air in some ways from the pop pap of the post-World War II 40s and 50s, but at most a breath relived from second grade, before Sputnik went up and the system started shoving math and science down our throats while still jiving the campy campfire sounds of “Mairzy Doats.”

Rock music is first, foremost, and always good time music, good times even in bad times, dancing to defy bad times, and power to the people always. The rise of rock coincided with, helped fuel, and was in turn fueled by the rise of a generation that couldn’t stomach plastic-fantastic lies any longer, emphatically including young women who didn’t really dig Doris Day or see themselves being Donna Reed.

(Women’s) liberation is implicit in rock’s hip-swinging beat. “Ladies,” by definition, do not shake their booties or groove thangs, twist the night away, or get down or funky.

That Jonah celebrates just 24 rock ‘n’ roll women in this book is surely a testament to discretion; just as the 29 choice CDs he names — admitting there are too many of the latter to list them all — are only the tip of an iceberg of life-affirming music. Every woman who came of age when Beethoven was rolled over has her own internal rock soundtrack.

The one guy included, in “Mr Tommy & Mick Jagger,” may not be the greatest example of American manhood, but I swear, I’d know this dude in any dancehall in the country, and Raskin is right, it “coulda been worse.”

I have to give an appreciative nod to Jonah’s restraint in not quoting from the rock lyrics that inspire and energize his verses; a constant temptation to me and one I seldom resist. At most, he uses a word or phrase ineluctably linked to a band or performer — “boogie” and Creedence Clearwater; a piece of heart and Janis; Otis Redding and the end of a dock — but mostly summons more subtle connections, the telling details of experience that make true songs:

Jonah has written six other books of poetry; American Scream, about Allen Ginsberg’s epic poem “Howl”; and several other books, including Marijuanaland — and is a regular contributor to The Rag Blog. Rock ‘n’ Roll Women‘s cover was designed by The Rag Blog‘s James Retherford.