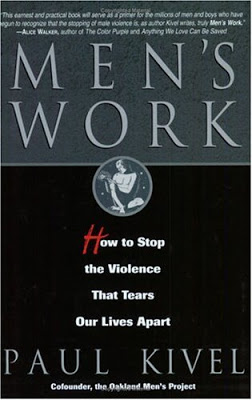 Paul Kivel, cofounder of the Oakland Men’s Project, has given all men (and those concerned about them) a tremendous gift in the form of this inspirational book. Valentine’s Day having just passed, this is a good time for us to accept this gift so that we might heal our relationships with the ones we love and with ourselves.

Men’s Work draws on Kivel’s decades of experience in the movement to end male violence, along with his life experiences as a father, son, partner, and friend, to speak about the trauma and feelings of powerlessness men experience in our capitalist, patriarchal society. He describes how men reproduce this system by hurting women, trans folks, children, and themselves.

He explains that this crisis cannot be solved by locking up male offenders, because this will only cause more violence and trauma. Instead, Kivel has devoted his life to helping men understand the roots of their behavior so that they might change, to become more caring and compassionate. One helpful way he approaches these roots is through the “Act Like a Man” box, which shows how patriarchal masculinity limits and hurts men:

Men….. Men are…
yell at people….. aggressive
have no emotions….. responsible
get good grades….. mean
stand up for themselves…. bullies
don’t cry….. tough
don’t make mistakes….. angry
know about sex….. successful
take care of people….. strong
don’t back down….. in control
push people around….. active
can take it….. dominant over women

All men have received this male training, and know that when they step outside these boundaries they will face abuse, scorn, name-calling, accusations of homosexuality or femininity, or violence. The fear of this abuse is ultimately what keeps us inside the Box.

It is not an irrational fear. This fear in me was built by getting beaten up after school by some older kid in the neighborhood who didn’t like me, by being teased and called names because sometimes I cried after I got beaten up. This fear was built by all the times my dad put me down because I wasn’t good enough in sports., at school, or whatever he decided was the standard that day.”

Hearing a man brave enough to tell these kinds of stories was empowering and validated my own experiences.

The book also includes a wealth of activities that the Oakland Men’s Project developed to help men think about violence, masculinity, abuse, and privilege, so that they might change their behavior. For those who are organizing men’s groups or accountability processes, these activities are fantastically useful examples.

Men’s Attitudes and the Cost to Women:

Stand up silently if you have ever…

There are many more example activities and scenarios that are helpfully fleshed out by real-life experiences of Paul and other men from the Oakland Men’s Project facilitating them in schools, groups of child sex offenders, and elsewhere. This way we get a realistic picture of how difficult, but also inspiring, it is when individual men learn and grow from their experiences.

On the other hand, I think what makes Men’s Work best is that it puts the actions of individual men within a systemic context. We understand that changing individuals’ behaviors, while important, is not enough to end patriarchy as a whole. We also must tackle the violence carried out by institutions such as the military, prisons, and capitalism.

Paul states, “When we advocate local and national politics that encourage war, prevent people from meeting basic needs, or destroy the environment, we are supporting violent behavior.” He also incorporates an intersectional analysis of race, class, sexuality, and age, so that we understand that male violence is not only used to hold up some generic colorless classless patriarchy, but a system that hurts people differently according to where they stand in society.

As feminist men and those working towards gender equality, we need to develop strategies to tackle our own individual patriarchal behaviors and attitudes, while also working against the patriarchal system as a whole. This kind of strategy is not really laid out in Men’s Work, but at least the book provides us a political context in which this work could be possible.

The one major criticism I have of the book is that it’s not inclusive of trans or gender non-conforming issues. The language is limited pretty much to “men” and “women” all throughout. There is also a lot of language that basically assumes heterosexuality, which of course is not inclusive of those of us who are queer or pansexual.

This book was originally written in 1991, and in some ways it seems to still be a part of the “Second Wave” of feminism which viewed “men” as the perpetrators and “women” as the victims of patriarchy. Obviously it is not that simple, because anyone can abuse anyone. As a male survivor of various forms of abuse, I know this firsthand.

Nevertheless, I don’t think this unfortunate limitation prevents Men’s Work or its analysis from remaining useful. The reality is that MOST abuse IS perpetrated by male-socialized people, and therefore men need to step up and take responsibility for ending this abuse.

Perhaps the greatest tragedy in our training is that we literally lost our souls. We became so cut off from our feelings that we no longer connected with other people, with life, or with the natural world. We became protective and controlling, unable to participate in the giving and receiving of love, intimacy, and relationship.

For me what ultimately makes this book necessary is that it talks about how men need to heal. We all suffer tremendously from patriarchy, including men (not more than women or trans folks, just differently), and therefore we all stand to gain from its overthrow. Paul Kivel writes in plain, everyday language that giving up male privilege will benefit men by opening up infinite possibilities, to understand and express emotions, to love, to live without fear and abuse, and to tap into a spiritual wholeness that we yearn for and need.

Thank you, Paul! Check it out, men everywhere!