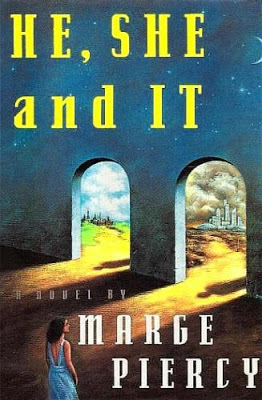 Marge Piercy’s ‘He, She and It’:
Science fiction as prophetic vision

Marge Piercy’s novel He, She and It appeared almost 20 years ago. My review appeared in Tikkun magazine in 1992. During these years, many aspects of her novel have loomed more prescient — even prophetic in the sense not of prediction but of accurate warnings spoken by the Spirit.

Anyone concerned with corporate domination, with global scorching, with feminism, with Middle East peace, with the renewal of Jewish peoplehood and Judaism, with the deeper meaning of computer technology and “artificial intelligence,” with Kabbalah, with the nature of humankind — will be drawn to think and feel more deeply by reading her novel. And as I wrote then, it is a novel — joy and sorrow in tales of love and failure, moral conflicts embodied in four-dimensional human brings.

Why do I want to share the review now? We are standing today on the brink of a great choice — for America, for the planet. This book helps us to look across the brink of disaster into a world scorched and flooded, a world nakedly controlled by corporations in outright feudalism, a world in which nevertheless, technological creativity is matched with spiritual creativity.

After a passage from the review itself (the full original review is on-line), I have added a note on my own personal relationship to the book that I did not discover till years later.

Androgyny and Beyond:
‘He, She and It’ by Marge Piercy

I began to read science fiction when I was 12 years old, just a few months after the atomic bomb destroyed Hiroshima, and I’ve never stopped. It wasn’t gee-whiz gadgets that attracted me; it was the dark visions and the rainbow cloudbursts of imagined social transformation, dystopian and utopian. My commitment to healing the world has been shaped as much by science fiction as by those other Prophetic writers whom I discovered much later — Isaiah, Marx, Buber, Heschel.

All that time I have been waiting for Marge Piercy’s new book. Not quite consciously waiting, you understand. Not even in my dreams could I have created this book, but in my heart and kishkes, I’ve been waiting.

Not just casually Jewish, but rooted in a sardonic version of Jewish mysticism and in the profoundly Jewish spiritual wrestle about what social justice means in a world where the Messiah is ever-coming, ever-vanishing.

Feminist, yes, like all of Piercy’s work. The story of the Golem of Prague – that famous artificial “human” being clumsily created by a great rabbi five centuries ago — is at the heart of Piercy’s tale. But the Golem takes a different form when his tale is for the first time told by a woman, Malkah, one of Piercy’s heroines.

Piercy’s kibbutz arises not in Israel but on the surviving hills of what we know as Boston. Surviving because much of the American coastline has been inundated by a new Flood, a surge of ocean from the melted ice caps, the result of global warming. It’s the mid-twenty-first century, and a lot we take for granted is gone.

The United States, for instance. It collapsed, like the — what was it? –oh yeah, the Soviet Union. The world is ruled by several gigantic corporations that have divided it into feudal fiefdoms. There are a few free cities, and the free Jewish town of Tikva (Hope) is one of them.

The Middle East has also vanished. Not just a government or two, a sovereignty or two, but the entire region, oil fields and fig trees and mountain goats and peoples. It’s the Black Zone now, an empty blotch on the map. Jerusalem is a wilderness of fused green glass, the thermonuclear casualty that set off a totally ruinous bio-chemical-nuclear war.

It turns out that there may be secret survivors — is anybody as stubborn and tenacious as Israelis and Palestinians? As women? But that’s a thread for you to follow when you read the book.

Piercy does give us some gee-whiz gadgets: computer networks deft enough to create planetary virtual realities, through which the corporations can struggle to invade Tikva, through which Tikva can struggle to defend itself, and through which people who explore them can transform themselves — and die. And cyborgs — cybernetic organisms, fusions of computer programming and biology, real live quasi-humans, with intelligence for sure, and maybe, just maybe, with free will. Or maybe not.

Can a cyborg be a citizen and vote in the town meeting of Tikva? Can a cyborg be a Jew and count in a minyan? And here is the neat and powerful question posed by Piercy’s fusion of feminism with science fiction: Who or what is a creature that is programmed with both a woman’s and a man’s mentality? Can a spiritual androgyne be a human? Or is the real question whether anyone who is not androgynous can be fully human?

Piercy’s androgynous cyborg may be the only fully human creature in the world. His name — in outward anatomy this cyborg is fully male, though inwardly also the He/She/It of the title — is Yod, the name of the tenth letter of the Hebrew alphabet. (This model was the tenth in a series of attempts to build a useful cyborg.) But “Yod” is also the first letter of God’s name, which is sometimes written as Yod-Yod. And it is close to the Yid that in Yiddish is the generic word for Jew.

Note the wonderful linguistic problems that Piercy introduces. Yod is the newest model of a cyborg, like the latest car, clearly an invention, a machine. Yet Yod has overtones of the ultra-human, much more fully in the Divine Image than anyone since the original Adam, who was made in Our Image, said God, in the Image of God, male and female, androgynous as God is androgynous. He, She and It.

This is a novel of ideas, but not only of ideas. By introducing a being who is both male and female, both human and machine, Piercy has jiggled and joggled the relationships of all the characters. Not only the ideas, but the people, are delicious. They make love, they get jealous, they fight for custody of their children and for control of their creations, they rebel against their bosses and comply with the rules, they take risks and die and go half-mad with grief.

The book is told from the alternating standpoints of Malkah, a tough and gentle grandmother who is sexually alive and technologically ingenious, and Shira, her bright and frightened granddaughter who is relearning her way toward love and a sense of her own power in the world. It is Malkah who has made sure that Yod has a full womanly as well as manly programming, and who searches for some way to tell him of his own ancestors. (Notice how Jewish is this desire: “Tell it to your child on that day,” says the Passover Haggada.)

But who, or what, is the ancestor of a cyborg? Malkah decides it is the Golem of medieval Prague, that doomed subhero to whom, in Jewish legend, the great Rabbi Judah Loew gave life and a mission to protect the Jewish people from pogroms. The story enters Yod’s consciousness at a level quite different from computer programming, a level that involves what seems to be free will; and after hearing the story, Yod assumes the triumph and tragedy of carrying the Golem’s being to a higher level.

How can Piercy dare to see a tiny Jewish town in such a bold light? I think it is because her Jewishness and her feminism fuse into a new vision. The Jews are too few to shake the world; women are many. Women are too diffuse and too diverse to make a counter-community; Jews know how. Counting noses on the face of the earth, the Jews are just about the tiniest imaginable community with a transformative vision; women could be the largest. But they cannot transform the earth alone, and they cannot transform it if they work alone, as individuals.

Piercy is saying that women must create communities of women and men in conscious connection with the earth, communities that are intimate and participatory, that so thoroughly share an approach to work, sexuality, money, and spirituality that they can stand together against the powers that be.

The struggle to heal the world may well take generations, Piercy warns, during which time even more of the world may be deeply wounded. An ancient Jewish wisdom for a wider human future: Only painful birth pangs can give birth to the days of Messiah.

Years after the publication of this review, years after Piercy had taught several summers at the Elat Chayyim retreat center where Phyllis Berman (not yet a rabbi) was the director of the summer program, Phyllis and I had Marge as a visitor for dinner. The conversation turned to He, She and It, and I said again how much I loved it.

Marge said, “Did you ever notice that at the end of the book, among the acknowledgements, I thanked you?” “Yes,” I said, “But I never understood it. It said something about my having clued you into some aspects of Kabbalah, but I can’t remember doing that — or even in those days, being able to.”

“Yes,” she said. “Do you also remember that way back in the mid-’60s, I was a Visiting Fellow at the Institute for Policy Studies, where you were a Resident Fellow?

“You asked people at IPS to look at about 50 pages of a novel you were trying to write. It began with a nuclear attack that destroyed Jerusalem and led to the collapse of both the USSR and the USA, and it included the creation of an independent Jewish commonwealth in New England.”

“Oh My God! Yes, it was around 1965. I was trying to write a novel in the form of letters from and to a future me. I called it “Notes from 1999.” I remember I imagined my grown-up daughter killed when a U.S. Navy sub unintentionally destroyed Jerusalem. Maybe that image was already a dead end. I never got anywhere with the book.”

“Thank God you wrote it. I couldn’t write a novel. You could. You did. Thank God!”