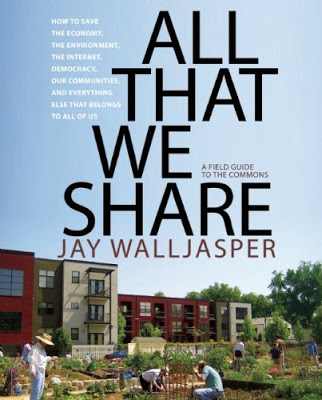 All That We Share isn’t enough:
The Commons as kinder-and-gentler capitalism?

[All That We Share: A Field Guide to the Commons/How to Save the Economy, the Environment, the Internet, Democracy, Our Communities, and Everything Else That Belongs to All of Us, by Jay Walljasper and On the Commons (The New Press, 2010), 288 pages, $18.95.]

All That We Share is an exciting and exasperating book. The excitement comes from the many voices arguing to place “the commons” at the center of planning for a viable future. The exasperation comes from the volume’s failure to critique the political and economic systems that we must transcend if there is to be a future for the commons.

In the preface, the book’s editor and primary writer, Jay Walljasper, describes how he came to understand the commons as a “unifying theme” that helped him see the world differently and led him to believe that “as more people become aware of it, the commons will spark countless initiatives that make a difference for the future of our communities and the planet.”

Defining the commons as “what we share” physically and culturally — from the air and water to the internet and open-source software — the contributors recognize that a society that defines success by individuals’ accumulation of stuff will erode our humanity and destroy the planet’s ecosystems.

Walljasper calls for a “complete retooling” and “a paradigm shift that revises the core principles that guide our culture top to bottom.” No argument there. Unfortunately the book avoids addressing the specific paradigms we must confront. Is commons-based transformation possible within a capitalist economy based on predatory principles and an industrial production model built on easy access to cheap concentrated energy?

The book appears to offer a kinder-and-gentler capitalism with more regulated markets, but there is no attempt to wrestle with the effects of the corrosive and unsustainable principles — unlimited greed and endless growth — on which capitalism is based.

Can we expect those core principles of the system to magically evaporate? Why will the commons become the domain of popular movements rather than corporations? If there is no attention to the inherently predatory nature of capitalism, it’s difficult to imagine how people will win out over profit.

There’s also little in the book about the need to shift from the industrial mode of production, which has generated the material comfort taken for granted by most in the First World. A sustainable commons-based society requires dramatic reductions in consumption, but contributors rarely address the scope of the change necessary (with the exception of Winona LaDuke’s essay on efforts to rebuild indigenous life at the Anishinaabeg White Earth Reservation). Forget about critiquing the lifestyles of the rich and famous — the commons can’t sustain the lifestyles of ordinary folks in a high-energy/high-technology world.

The problem is not that “the commons” isn’t a valuable concept, but that it is not a substitute for analysis of the political and economic systems that degrade the commons. The book is right to call for local experiments in cooperative living (I spend considerable time and energy on such projects), but as we pursue those experiments within the existing systems, we have to be honest about the limits of those systems and not fear being labeled radical. Radical analysis is not an intellectual indulgence but a practical necessity.

As a model for “commoners,” Walljasper cites the right-wing forces’ ideological campaign in the late 20th century to shape the market fundamentalism that eventually became state policy. He suggests that today “large numbers of people of diverse ideological stripes” can rally behind the commons, which may be true.

But right-wing forces didn’t assemble people of different ideological stripes; they pushed an openly reactionary analysis and had a clear political and economic program. Just as they defended capitalism to the detriment of the commons, a countermovement has to openly critique capitalism to serve the commons. Just as they took the industrial model as a given, a countermovement has to question that model openly.

It may be that the commons has the power to transform people’s consciousness as Walljasper seems to hope, but hanging one’s analysis and political hopes — as the book’s long subtitle suggests — on that concept strikes me as evasion rather than engagement. In the end, we have to come to terms with capitalism and the industrial model that are deeply entrenched in the United States. That can’t be done obliquely but must be confronted head-on.