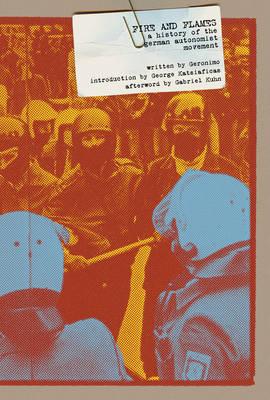 The squats served as living spaces and community meeting places. By 1973, they would become the site of some of the fiercest street battles ever seen in postwar Frankfurt.

My latest novel is situated in Frankfurt am Main in what was then West Germany (or the Bundesrepublik Deutschland for you German speakers). The time period is 1971-1972 and two of the main protagonists live in a squatted building across from the U.S. military’s Post Exchange.

This squat really existed. In fact, there were several squatted buildings in Frankfurt, especially in the part of the city known as the Westend. The squats served as living spaces and community meeting places. By 1973, they would become the site of some of the fiercest street battles ever seen in postwar Frankfurt. The battles took place because the police had been instructed to take the buildings back by the banks that owned them and the politicians that served those banks.

I mention this because I just finished reading a testament to the movement that grew up in the wake of the early 1970s squatting movement, the demise of the German New Left, and the rise of the West German terror groups like the Rote Armee Fraktion (Red Army Faction).

This testament, written by a participant in this movement who goes by the name Geronimo, is titled Fire and Flame. Originally published in Germany in 1990, it was translated from the original German in 2012 and published by the left/anarcho PM Press out of Oakland, CA.

The book is a brief survey of the numerous left and anarchist movements that characterized extraparliamentary West German politics in the 1970s until the end of East Germany in 1989. The squats, the red cell groups, the antinuclear movement, the Spontis, the Red Army Faction, and the alternative movement are presented and briefly discussed. In addition to relating stories of actions and events, Geronimo also discusses the politics of the different groups from what can best be termed a libertarian left perspective.

Unlike in the United States, the left libertarian and anarchist groups in Europe tend to have a clear understanding of how capitalism works. Instead of identifying as anti-capitalist without the theory to back that position up, the groups discussed in Fire and Flames (who would become known as Autonomen) usually professed their anti-capitalism in clear Marxist terms.

The areas where the Autonomen differed the most with Marxist organization, whether they were small and cadre-oriented like the Rote Zellen and the Rote Zora, or larger party organizations bearing the term Kommunistische somewhere in their name, was in how they organized. In short, the Autonomen were against leaders and against cooperation with the authorities. They expressed their politics through protest, lifestyle, and attitude. Naturally, this frustrated those with more long term goals.

Fire and Flames is introduced by George Katsiaficas, author of The Global Imagination of 1968 and several other books examining various protest movements around the globe, including his look at the European squatters’ movement of the 1980s.

The choice of Katsiaificas is an intelligent one. His approach to modern social movements extends well beyond a traditional Marxist-Leninist or anarchist understanding. The phenomenon he calls the “eros effect” is similar to what Immanuel Wallerstein calls “antisystemic movements.” While incorporating a Marxian analysis of capitalism and its history and its mechanics, both reject the approach to systemic change experienced in previous modern revolutions.

In other words, for these men the vanguardist model is dead. Meanwhile, both consider the changes in consciousness and culture brought on by the events of 1968 (and in Wallerstein’s thesis, 1848 as well) to be intrinsically revolutionary in a perhaps even greater sense than the bourgeois revolutions of the late 18th century and the Leninist ones of the 20th.

One of the most intense protests I ever attended was in spring of 1973. A German-American friend of mine had introduced me to a squatted set of apartments in the Westend of Frankfurt am Main. The main attraction for me was a small Gasthaus and meeting room on the ground floor of one of the buildings. I would occasionally visit the place to listen to music, drink beer, smoke hash, and maybe talk to a German girl.

That spring there was an impending sense that a showdown with the authorities was coming. The speculators who had purchased the buildings were tired of letting squatters live in them. They wanted to tear them down to build much more profitable office buildings. The Social Democratic city council was ready to cave and the Polizei were ready to kick ass.

I convinced myself that I was ready for whatever happened and took the streetcar to a stop near the protest that April weekend. The fight was already underway when I got off the tram. I lasted perhaps four hours and left when a couple hundred more cops arrived.

This protest was an early part of the movement described by Geronimo. From the squats to protests against nuclear power; from struggles against prison terror to rallies against abortion laws and more. This quick catalog of the West German street movements of 1968-1989 suffers from only one thing: its brevity. Thanks to PM Press for introducing it to the English-speaking audience.