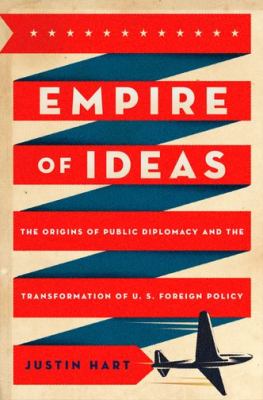 Spreading the word:
‘Democracy, we deliver’

In his inimitable style, Blum rips into the lie of U.S. propaganda and takes Hart’s academic discussion into the streets.

Empire of Ideas: The Origins of Public Diplomacy and the Transformation of U.S. Foreign Policy by Justin Hart (2013: Oxford University Press); Hardcover; 296 pp.; $34.95.

A frequent target of antiwar protests when I lived in Frankfurt am Main, Germany, was the local Amerika Haus. These buildings existed in several European cities and were essentially outposts of the United States Information Agency, which was part of the propaganda wing of the United States government and under the aegis of the CIA.

As the U.S. war in Vietnam grew in intensity and scope, their presence became a sore point among leftists and other war opponents in the countries that hosted them. At the same time, the Frankfurt Amerika Haus was where I heard Kurt Vonnegut give a lecture that did not support the war in Vietnam.

In Justin Hart’s new book Empire of Ideas: The Origins of Public Diplomacy and the Transformation of U. S. Foreign Policy, Amerika Haus and many other aspects of Washington’s propaganda machine are addressed. This history of the origins of the current government propaganda machine in Washington covers the years 1936-1953 and presents the debates, uncertainties, and ultimate use of that machine as an important tool in the proliferation and maintenance of U.S. markets overseas.

After watching Michelle Obama’s presentation of the award for Best Picture to a film praising the CIA from the White House, it’s somewhat difficult to believe that there was a time when politicians and government officials questioned the usefulness of propaganda in the battle for U.S. hegemony. Yet, that is exactly where Hart’s story begins.

In a rather interesting tale, he presents the beginnings of what is euphemistically called public diplomacy in Franklin Roosevelt’s Good Neighbor Policy towards Latin America. It represented a new understanding that spreading U.S. culture helped open markets overseas while simultaneously justifying the growing U.S. Empire to the domestic audience, an audience which to that point was mostly isolationist in its outlook.

This new approach was not without its detractors. Most of them came from the extreme right, who saw propaganda as communist-inspired, given its use by the new Soviet government in Russia. This concern was also related to the fact that cultural diplomacy (another euphemism for propaganda) was championed primarily by liberals and progressives with Henry Wallace leading the charge.

The presence of liberal elements at the forefront of this movement lends further credence to the argument that it was liberals and progressives who were at the forefront of the U.S. hegemonic endeavor. It’s obvious from Hart’s telling that the inclusion and acceptance of propaganda as a useful tool for those interested in building the U.S. Empire (pretty much every official in Washington) was not without its ups and downs. However, by the time Harry Truman was president, it was clear that its role was accepted and certain to expand.

Of course, when propaganda failed, the iron fist became ungloved. By 1950, the U.S. military was engaged in a brutal war in Korea whose aim was similar to the efforts of the cultural propaganda committee. In other words, to keep the Soviets from expanding into markets Washington had defined as its own. Meanwhile, the Marshall Plan, hyped as bringing democracy, was underway in Europe and part of the same process. 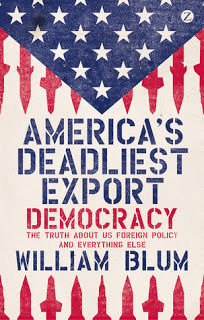 As William Blum makes clear in his latest collection, America’s Deadliest Export: Democracy – The Truth About U.S. Foreign Policy and Everything Else, the folks that truly benefited from the Marshall Plan were the U.S. corporations that rebuilt Europe. Just like the so-called reconstruction funds apportioned to Kosovo after its “liberation” and Iraq after the U.S. invasion, the truth about those reconstructions is that they were primarily a means to move taxpayer dollars from the U.S. treasury into the coffers of a few giant corporations.

Blum’s new book is a collection of commentary exposing the true nature of Washington’s ongoing campaign to spread its democracy around the world. While reading it I was reminded of the t-shirt that shows a photograph of a U.S. bomber plane dropping bombs on some city somewhere on planet earth. Inscribed above the photograph are the words “Democracy, We Deliver.”

America’s Deadliest Export explores the lies involved in this campaign and exposes the brutality and associated arrogance. In his inimitable style, Blum rips into the lie of U.S. propaganda and takes Hart’s academic discussion into the streets, simultaneously pointing out the hypocrisy of U.S. democracy and indicting it for the fraud it is, not only abroad but at home, as well.

While Hart’s text looks primarily at the role of U.S. propaganda overseas, Blum’s tends to focus on how it is utilized to manipulate domestic public opinion. He takes the concept that Washington and its military act only for the good of the world and traces its history from the “Good War” to the “humanitarian” intervention in Libya, and the “liberation” of Iraq.

Along the way, he not only shows the lie behind the concept but how that concept is accepted by most U.S. citizens in the same way Christians accept the immaculate conception of the Virgin Mary.

These two books provide a complementary narrative on U.S. foreign policy. While Hart’s book examines the development of the U.S. imperial propaganda machine, Blum’s looks at its growth and also the brutality of the military about whose operations the propaganda seeks to misinform.

As we move into an age where the only victims of U.S. wars are those whom our propaganda claims to be freeing and the assumption of our national goodness is enforced and reinforced to the point of overkill, the understanding these two books provide is more crucial than ever.