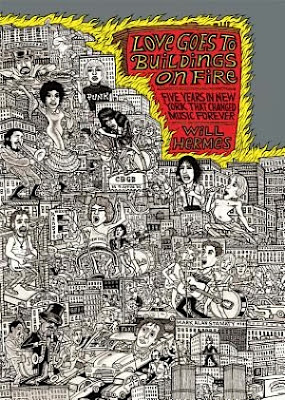 Love Goes to Buildings on Fire:
New York City, just like I pictured it

From the steamy streets of the South Bronx and the future that would become hip-hop to the steamier bathhouses and clubs in lower Manhattan that became world-famous dens of disco, Hermes relates his tale.

My stated reason for being in New York in 1973 was to go to school, but my real intent was to immerse myself in leftist politics and rock and roll culture. Almost every weekend I headed to the Village and Lower East Side in search of weed and music or politics.

There were plenty of protests even after the heyday of 1968-1972 and the issues were still the same. Imperialism, war, poverty, racism, and police brutality. The music, however, was starting to change. There were rumblings of something new in the dives and occasional street fair.

I remember seeing a band (I think it was the New York Dolls or their predecessor) near St. Mark’s Place one Saturday afternoon. I was not into the poor quality of the music, but found the presentation fascinating and unlike anything I had seen before. Still, though, my primary musical preferences were Bob Dylan, the Stones, the Grateful Dead and the Beatles.

One weekend a friend and I saw a poster for a rock show at the Hotel Diplomat near Times Square. The show featured a woman whose book of poetry I had just bought on the Lower East Side. The book was called Witt and the poet’s name was Patti Smith. The show I remember I remember because of Smith. The hotel I remember because it’s where Abbie Hoffmann got busted for coke and then went underground.

I was a scholarship student at Fordham University in the Bronx. So was almost everyone else on the floor of my dorm. There were only a couple of us white-skinned guys on that floor. The rest were Puerto Rican and African-American. I heard more salsa than I knew existed. Smoking pot, discussing Marxism and Eddie Palmieri was how I spent many Saturday nights.

Sometimes, nobody in the dorm would go home for the weekend. On those weekends, the music leaking under the dorm room doors with the pot smoke included the Allman Brothers, the aforementioned Palmieri, Earth, Wind and Fire, Sly and the Family Stone, the Dead, and Bob Dylan.

I left New York after seven short months. A floormate from Teaneck, New Jersey, had just introduced me to a new band on the scene known as Bruce Springsteen and the E Street Band. I saw him in Maryland a few months later.

The changes I felt were soon to rule the world of popular music. This is the story rock music writer Will Hermes tells in his 2011 book Love Goes to Buildings On Fire: Five Years in New York City That Changed Music Forever. Recently released for the first time in paperback, Hermes’ text is more than a look at music in New York. It is a history of the city during the period covered that rarely mentions economics and politics yet ekes them.

From the steamy streets of the South Bronx and the future that would become hip-hop to the steamier bathhouses and clubs in lower Manhattan that became world-famous dens of disco, Hermes relates his tale. Like his namesake, he carries the message that punk rock shouted and salsa sang. The period herein may have been the last time New York mattered as much as it did in the world of popular culture.

Jay-Z may still be there, but there is no creative center any more. In fact, the dispersion of that center into the global world may have been the unforeseen result of the bands, beats, and jazzmen Hermes writes about so wonderfully.

Lurking behind Hermes’ tales of Patti Smith and Richard Hell; Afrika Bambaata and David Murray; and the multitude of others that star in this book is the spectre of corporate greed destroying culture and pretty much anything else it touched. Indeed, this included an attempt by Gerald Ford and Donald Rumsfeld to make Manhattan default. Yet, while this attempt to force austerity on the world’s cultural capital ultimately succeeded only partially, the mélange of cultural mixes did create what became termed world music.

This is a book about Debbie Harry and Eddie Palmieri; Bruce Springsteen and Grandmaster Flash; Abe Beame and CBGBs; Miles Davis and Anthony Braxton. It’s a book about the clubbers and the brothers and sisters attending the DJ contests in the Bronx and the punkers bleeding in the Bowery. The names are so familiar that some are forgotten.

The cover art is by Mark Stamaty, formerly of the Village Voice (back before Murdoch destroyed it). He is also the author and illustrator of one of my favorite children’s books, Who Needs Donuts? The drawings he does are cartoonish, encompassing and busy, as if he was on stimulants. They are the artistic representation of the story Hermes has written down.

In a nutshell, that story is about the birth of hip hop via the transition of the beat; the C-section that was punk and the future of rock and roll that was Bruce Springsteen. Love Goes to Buildings On Fire isn’t about passing a torch. It’s about that torch enveloping the past and the future of popular music in its flames.