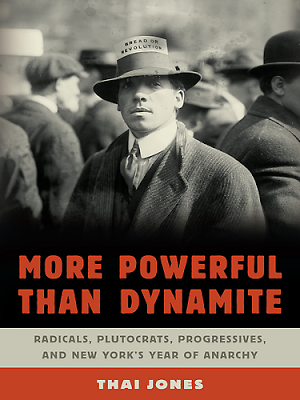 Anti-capitalist protests in Union Square brutally attacked by police. Economic hardship among the workers. Ostentatious expenditure by the wealthy. This scenario sounds like the news headlines of the past couple of years, yet the period referred to is the year 1914 and the story is the one told in More Powerful Than Dynamite: Radicals, Plutocrats, Progressives and New York’s Year of Anarchy.

This book is a history that includes some of history’s most famous anarchists and a progressive president determined to use government for good but indebted to the finance house of Wall Street. That indebtedness leads him into war and repression.

There’s also a progressive mayor of the world’s largest city whose plans include using government to lift people from poverty and despair. His social engineering ends up making very few people happy: not the wealthy and not the poor.

The city was New York. The year was 1914. The anarchists included Alexander Berkman and Emma Goldman. The mayor was John Mitchel and the president was Woodrow Wilson.

Despite the best-laid plans, it was as if the weather itself conspired with the plutocrats in a relentless effort to prevent Mitchel from ending the corrupt tradition of politics in Manhattan known colloquially as Tammany Hall. The economy that had already shrunk the employment rolls worsened in the wake of a series of snowstorms and bitterly cold weather that forced thousands into the streets without work, shelter or income.

When a city agency decided to use the unemployed to shovel snow out of the streets and sidewalks, not only did the task turn out to be beyond the capabilities of those involved, the measly pay offered became one more cause for radicals to organize around. The popularity of the cause proved the rationale of the organizers.

There was no communist party in the United States in 1914. The lead in the protests was taken by the anarchists. Their success at engaging the urban unemployed while enraging the wealthy and middle class encouraged the leadership to take increasingly provocative actions. This in turn intensified the wrath of the wealthy and their guardians, the police.

After it was determined that the aggressive and violent tactics of the police only served to increase the popularity of the protests, a new chief was appointed who changed tactics. He allowed protests while simultaneously building an intelligence network among the radicals.

This network involved the recruiting of spies, provocateurs and, ultimately, the use of those provocateurs to instigate actual crimes designed to incriminate individual radicals, thereby painting the entire movement as criminal. In short, anarchists were the “terrorists” of the period and the tactics used by the authorities against them were the same as those being used against today’s “terrorists” and radicals.

Jones, whose previous work includes a memoir (A Radical Line) that is partially about his childhood growing up underground with his Weather Underground parents, provides the reader with an incredibly detailed, impeccably researched look at this period in New York’s history.

Not only do the characters come alive in Jones’ telling, so do the issues. Of course, this is in part due to the fact that the issues continue to be relevant in today’s climate of corporate domination and willful destruction of the dreams of working people.

For many people, reading history can be a chore. A good history text must either tell a story so good that one puts up with the dryness of the text or it must be told in a way that keeps the reader’s interest. In More Powerful Than Dynamite, Thai Jones provides both, thereby creating a compellingly written tale of an incredibly interesting time.