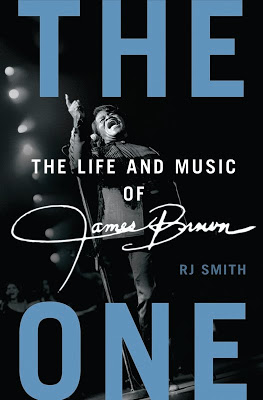 Papa had a brand new bag:
James Brown was ‘The One’

When I was in junior high back in 1967-68, many of my Saturday afternoons were spent at the outdoor basketball courts across the highway from my house. These courts were where I learned about many things besides basketball, which I was never very good at.

Sex, beer, and music were the three favorite subjects of conversation. By music, I mean everything from the Beatles to Led Zeppelin, Joe Tex to James Brown.

The blacktop courts were midway between the lily-white suburban development I lived in and the so-called “colored” section of town. That asphalt served as a neutral zone for anyone who wanted to play ball.

Like I said before, I was never very good at basketball (or any other sport for that matter) but was appreciated for my smart ass banter and musical knowledge. These were the days before iPods or even boom boxes. Hell, 8-tracks had barely made an impression on our youthful culture back then. The only source of music that was portable was the transistor radio.

In the Baltimore-Washington, D.C.area, there were three or four stations that played the songs people were listening too. WPGC-FM and WCAO-AM played the Top 40 hits of the day while WOOK and WUST played soul and R&B. While radio was not as divided into niche markets then as it is today, the fact is that the very few performers were heard on both stations. For example, Led Zeppelin and the Beatles were never heard on the soul stations, while Bobby Blue Bland and Joe Tex were rarely heard on the Top 40 stations.

There was one man, however, who was heard quite often on both formats back then. His name was James Brown. We would choose our teams and play pickup game after pickup game. Since there were usually more than 10 kids hanging around, the odd guys out chose the music (unless we were convinced otherwise).

Whenever the current hit by Brown came on the brothers would start vamping. Doing the slide step as they neared a basket or attempting a split at mid court. Then they would tell us lighter skinned guys to not even try. We knew we couldn’t dance like Mr. Brown. That particular period of time was when James Brown truly was the King of Soul, when he really was The One.

This was also a period when racism had very few shadows to hide it. Black men were subject to whatever wrath a white man felt like imposing on him. Black men with money and power like James Brown felt that wrath perhaps less often but in greater measure when they did feel it.

A new biography of Brown, titled The One: The Life and Music of James Brown, places that pride in the context of the black freedom struggle in the United States. It opens with the story of the 1739 Stono Rebellion in colonial Georgia that saw slaves killing slave owners and increasing their ranks as they marched through the area just south of Charleston, S.C. beating their drums, singing and dancing in rebellion. Forty slaves and 20 whites were killed during that rebellion and never again did Georgia legally import slaves from the African continent.

With the story of the slave rebellion as his jumping-off point, biographer RJ Smith writes a tale that evokes Mr. Brown’s insistence on freedom, his pride, innate musicality, and the high-energy life that helped earn him the title of the hardest working man in show business.

Smith gives the reader a fantastic story: from Brown’s roots in Augusta, where he entertained soldiers on weekend passes with his dancing while hustling them down to the brothel where he lived with his aunt, to his casket’s tour of three cities after Brown’s death in 2006. The text details the complexities of a man who, with this bandmates, created a signature musical style that many have used as inspiration but none have successfully duplicated.

It also traces the political journey of a black man in the United States during a time when the world of Black America underwent a sea change. Never a militant, but always an individual proud of his racial and personal identity, Brown’s politics included Martin Luther King and Richard Nixon; Elijah Muhammad and Strom Thurmond.

His support for Nixon’s 1972 campaign led to a boycott attempt by several African-American organizations and individuals that had some success. Smith relates a tale of 10,000-seat arenas with less than 2,000 concertgoers. When I thought about seeing a concert of his in Frankfurt, Germany, in 1972, my African-American comrades convinced me not to go because of Brown’s support of Nixon (it didn’t take much — I hated Nixon). They passed out leaflets in the parking lot discouraging attendance. At the same time, Brown’s singles were still being played on the radio and still selling.

At a recent anti-racism rally in Burlington, VT. held in the wake of the murder of Trayvon Martin, a black teen talked about his struggle to maintain a positive self-identity in a culture that insists on labeling him and other black males in as negative of a light as possible.

James Brown would have agreed with that young man. His political actions, his insistence on doing things his way musically and otherwise — all of these actions, writes Smith, stem from a combination of Brown’s ego, mistrust, and determination.

To hear Smith tell it, James Brown definitely did not come from comfortable beginnings. He movingly describes just how tough it was. Anything that came easy made Brown suspicious. This didn’t seem to change as he grew older and developed into one of the world’s best-known people — his fame in Africa rivaled that of boxer Muhammad Ali, while in the United States very few acts sold more records than Brown.

Never one to rest on his laurels, Brown gave hundreds of shows every year, went through wives and mistresses almost as quickly as he did towns and cities when he was on tour, and spent money quicker than he could count it. The magic of Smith’s writing is that Brown’s life is told in as captivating a manner as Brown lived it. This is a classic rags-to-riches Horatio Alger story, but with a twist: it’s Alger’s “Ragged Dick” as an African-American bootblack who rises above his station.

Smith, who is also the author of The Great Black Way: L.A. in the 1940s and the Last African American Renaissance, and a former music writer for the Village Voice and Spin magazine, has done a public service by writing this biography. His approach to the narrative does more than detail the life of James Brown. It captures the essence of a James Brown performance and manipulates that essence — its franticness, its passion, and its sheer jubilation — into a story about one of the world’s greatest musicians and performers ever.

In Smith’s telling, it becomes clear that James Brown’s myth was not only larger than life, so was James Brown himself.