BOOKS / Ron Jacobs : The Faith and Resistance of the Catonsville Nine 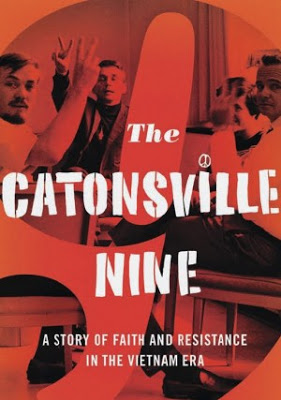 Faith and resistance:
The story of the Catonsville Nine:

Peters’ compelling narrative renders the Catonsville Nine not as saints or as villains, but as human beings who could no longer be silent in the face of injustice and war.

Fire is a most evocative element. From Hell to the fiery tongues of the Christian Pentecost to the forges of Hephaestus and the Fire Demon of the Bhagavad-gita, the religious meanings attached to fire swirl around the concepts of death, punishment, and rebirth.

On a more real level, fire is an all too familiar part of war, whether it is the Greek fire of Byzantine warfare, the crematoriums of Buchenwald, the firebombing of Dresden and various Japanese cities in World War Two, or the searing death of napalm in Vietnam and white phosphorus in Iraq. The screams of the incinerated are impossible to fathom for those unfamiliar with the horror of war.

On May 17, 1968, several Catholics brought this fact home to U.S. citizens when they stole almost 400 Selective Service files and burned them with napalm in the parking lot of the Catonsville, Maryland, draft board office. That act was to earn them damnation and praise; death threats and calls for sainthood; a trial and prison terms.

I myself was a questioning 13-year old Catholic kid living 20 miles away from the pyre. That action made me see my faith in a new light. Maybe there were those in the Catholic Church who understood the example of Jesus to be a revolutionary example, not an affirmation of the patriarchy and the war machine.

Maybe my occasional consideration of the priesthood might be the way to go. One didn’t have to be like the conservative clerics banning books, movies and music from the pages of the Archdiocese newsweekly or the disapproving priests in our parish who read the Pope’s 1968 encyclical on birth control with what seemed to be woman-hating relish.

Obviously, I didn’t become a priest, although the example of the Catholic anti-warriors and liberation theologians (and the conversation of some Jesuit seminarians and priests during high school) did lead me to spend a couple months in a seminary before I went off to try college at a Jesuit university. Within a year of that endeavor, my hope for the Church was gone, having washed away in a realization that if the Church didn’t hate women, they surely did not trust them.

Like most other anti-warriors, I have worked with priests, nuns, and other Catholics in a number of actions and committees and have usually found them to be sincere and committed people. It is their boss and his pronunciations I can’t abide.

The Catonsville participants went to trial in 1968 and, thanks to the arguments of their lead attorney William Kunstler and the understanding of the court, the defendants were allowed to bring the questions of the Vietnam War and the draft into the courtroom. The trial was covered by news organizations around the planet. Poet Daniel Berrigan (Philip’s brother and a Jesuit priest) wrote a well-received play titled The Trial of the Catonsville Nine. The play modified the trial transcript and addressed the moral issues involved, alluding to other instances of the struggle between conscience and authority throughout history.

While sympathetic to the ideals that drove the Nine to break the law in such a dramatic manner, Peters does not skimp on detailing the criticism levied against the Nine from the outside. Nor does he whitewash the internal doubts and misgivings that took place within the group during the planning, execution, and aftermath of the action.

The reader is left with a tale of commitment, spiritual certainty, and human emotion. Despair, anger, ecstasy, and determination are the ingredients of Peters’ narrative and he combines these ingredients with the skill of a master storyteller.

The personal history of each member of the Nine is presented as a prelude to the central event in the book: the draft board raid and the subsequent trial. Their lives as children brought up in a Catholic church known for its dogma and rigidity is discussed. So is the effect of the liberalization of that church during the brief reign of Pope John XXIII and the Vatican Two conference.

Equally important to many of the protagonists were the words of the Church hierarchy regarding the nature of modern war, colonialism, and imperialism. It was during the post-World War Two period that the Catholic Church became more vocal in its opposition to war, the preparation for war, and the inequality of the ever-growing world capitalist system.

The combination of these words from the hierarchy, the liberalization brought on by Vatican Two, and the desire of more and more Catholic clergy to engage in anti-poverty and antiwar work instead of just ministering to the spiritual needs of their flocks created a critical mass of activism within the Church. This included those members of the Nine whose previous work as missionaries in Latin America had revealed the disconnect between Washington’s words of social justice and the poverty and repression of daily life under U.S.-sponsored regimes. They realized they could no longer not participate in opposing those regimes.

This activism did not sit well with many more conservative church members. Peters relates this aspect of the Nine’s tale well, intertwining the reaction to the Nine and other activist Catholics with the Nine’s frustration with the Church to act on its words about peace and against war.

Although the strongest opposition to the Nine came from law enforcement and those who supported the war, there were many in the Church who had nothing positive to say about the group, either. Indeed, for some members of the Nine, it was the negative response from the Church that bothered them the most.

The Catonsville Nine have always been identified with the Berrigan brothers, Philip and Daniel. In part, this was because the two men were the individuals that the media focused much of their attention on. Another reason was due to the sheer presence of both men. Not to be discounted was the fact that they were both priests, while the other members of the Nine were mostly laypeople, although David Darst was a Christian Brother.

Peters’ book does a wonderful job bringing the other seven members of the Nine alive. His well-researched tale makes each of these other activists fully three-dimensional. By doing so, he creates a picture of the Nine that presents the entity of the Nine as much a part of the actual story as the Catonsville action itself. While drawing this picture, he also provides the reader with a representation of the entire Catholic antiwar movement of the 1960s and 1970s.

The lasting legacy of the Catonsville Nine action is Daniel Berrigan’s play, The Trial of the Catonsville Nine. First published in 1970, this play in free verse used the trial transcript of the Nine as its inspiration. It was produced around the world almost immediately after its publication and was made into a film in 1972, produced by Gregory Peck. I recall seeing it performed on a military base by a community theater group made up of GIs and military dependents.

Incredibly powerful and direct, it is still performed and was republished during the U.S. occupation of Iraq in 2004. Like the draft board raid itself, the play forces the individual, no matter what their faith, to look at their role in the war economy we live in and it asks the audience members/readers what they are going to do about it.

In its own way, The Catonsville Nine: A Story of Faith and Resistance in the Vietnam Era also forces the reader to deal with this modern contradiction. It doesn’t call on the reader to become an activist; it presents them with the compelling story of individuals who did.

This is a must read for people of any faith, whether that faith is in a god or in humanity. Peters’ compelling narrative renders the Catonsville Nine not as saints or as villains, but as human beings who could no longer be silent in the face of injustice and war. They risked everything and, by doing so, gained much more than they ever could have lost.

It is a story older than Antigone but, when told as masterfully as Peters does here, it is a story that never grows old. Nor should it.