BOOKS / Ron Jacobs : The Panthers and ‘Black Against Empire’ 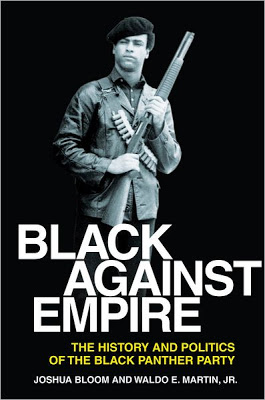 Black Against Empire:
The legacy of the Black Panther Party

“We didn’t preach to the people, we worked with them.” — Former Black Panther Mumia Abu Jamal

Once again, it’s Black History Month in the United States. Since the inception of this celebration, its meaning has unfortunately been diminished as the myth of post-racialism becomes gospel, even though it shares none of a gospel’s truths.

In schools and libraries, well-meaning teachers and library workers create displays, bring in speakers, and teach lessons on the history of African-Americans. All too often, this means a look at the words of Martin Luther King, Jr., a discussion of the Emancipation Proclamation, and maybe a lesson about Rosa Parks. Only rarely, do students and library patrons get a look beyond these conventional topics that are usually taught in a manner that highlights white America’s tolerance and sense of fair play.

This is why books like the recently released Black Against Empire: The History and Politics of the Black Panther Party are so important. They remove the pretense that the Black liberation movement in the United States was something everyone except the KKK and its allies supported. Books like this tell the truth. Blacks Against Empire does so concisely, engagingly, and honestly.

Black Against Empire is a political history that is simultaneously objective and radical. Despite the efforts of historians to obfuscate and obliterate the party from history, describing it as a hate group and gun-obsessed when mentioning it at all, the fact is the Panthers’ legacy is unique and important to not only the history of Black America, but to the history of the entire United States. It is best described in the words of Mumia Abu Jamal: “We didn’t preach to the people, we worked with them.”

The relationship between the primarily white New Left and the Panthers is explored in a fair-minded and realistic manner, as is the relationship between the Panthers and other Third World revolutionary organizations, both in the United States and around the world. The authors expand the narrative of the movement against the U.S. war in Vietnam, showing clearly the early involvement of black organizations, especially that of the Student Nonviolent Coordinating Committee (SNCC). It was this organization that actually began resisting the draft, months before the predominantly white anti-war movement.

Furthermore, as the authors make clear, opposition to the U.S. war in Vietnam was one of the Black Panthers’ fundamental positions.

Like most revolutionary organizations the Panthers struggled with issues of gender and sexuality. While the participation of men in the breakfast programs sensitized them to the realities of child-rearing and associated aspects of human life (think of the film Salt of the Earth, when the women replace men on the picket lines and the men take over household tasks forcing them to see the relationship of domestic tasks to the capitalist dynamic), the living situations of many Panthers reinforced traditional gender roles.

Joshua Bloom and Waldo E. Martin, Jr., the authors of Black Against Empire, have written a comprehensive and compelling history of the Black Panther Party. As close to complete as one text can possibly be, it is the book I would recommend to anyone wanting to read just one book about the Black Panthers. The book concludes with a chapter speculating as to why the Black Panthers developed when they did, why they commanded the support they did, and why their influence waned so quickly.

Of course, the role of the government counterinsurgency program called COINTELPRO is discussed; the frame-ups, misinformation, jacketing, and murders. In light of current concerns about domestic “terrorists,” one wonders if the Panthers would be considered drone assassination targets under the current Justice Department guidelines if they were around today?

Other reasons provided by the authors for the Panthers’ demise borrow from the Italian Antonio Gramsci’s thoughts on revolutionary movements and end up asking more questions than they answer. 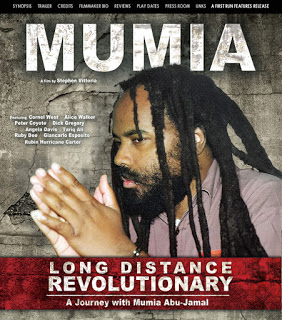 Back to Mumia Abu Jamal. One of the youngest Panthers in the nation, he continued his revolutionary activism and reportage long after the Black Panthers had become history. Indeed, his post-Panther trajectory could serve as a microcosm of many leftist revolutionaries who came of age during the Panthers’ heyday.

He didn’t give up his radicalism while pursuing a career after the Party. Because of this, he ended up paying for his history and his refusal to compromise. He continues paying even today. For those who have forgotten (or never paid attention), Mumia has been on Pennsylvania’s death row for more than two decades. Accused and convicted of killing a Philadelphia policeman in a prosecution involving the sketchiest of evidence and numerous prosecutorial and judicial missteps, Mumia’s life and situation is the subject of a new feature film titled Long Distance Revolutionary.

When I was helping organize antiwar activities in the late 1990s and the 2000s, I learned that many of the younger radicals I was working with came to their politics after learning of Mumia’s case. Thanks in no small part to his eloquence and the support of popular musicians like Rage Against the Machine, these young people saw through the intense desire of the State to keep Jamal in prison and kill him. This understanding opened their eyes to the realities of the system and made them radical.

As the film shows, this trajectory is similar to Jamal’s. Mumia is a political prisoner. The Panthers were a political organization. The story of both is a story that needs to be heard. The film is part biography, part commentary from supporters and Jamal himself, and part drama. The sum of these parts is a film that provokes and entertains.

Black history isn’t just for black people. It’s for everyone who wants to understand the history of the United States.