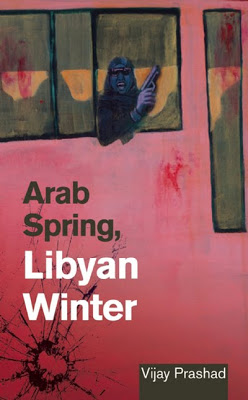 The last 20 or so months have certainly been months of insurrection. This is perhaps no truer anywhere on earth than in the Middle East and northern Africa.

Indeed, there is even a phrase describing this fact. That phrase is “the Arab Spring.” Exactly what the phrase “Arab Spring” means is still open for discussion. Indeed, it can be argued that the real meaning of the phrase and the events it names has yet to be determined.

After the protests, the sit-ins and encampments, the armed assaults and the killings, the only thing certain is that three dictatorial autocrats are no longer in power in the countries they formerly ruled. Ben Ali, Mubarak, and Qaddafi. The unholy trinity of the ancient regimes. What will stand in their stead is still being debated, although the interim regimes that replaced them are doing their best to become permanent.

When the Egyptian people began to gather in Tahrir Square in February 2011, the embers of the immolation that consumed Tunisian street vendor Mohamed Bouazizi had already sparked the prairie fire that overthrew the dictatorial ruler Ben Ali.

The protest in Tahrir Square was the first manifestation of that fire in Egypt but certainly not the last. As everyone must know by now, the fires of protest in Egypt tossed out their dictator less than two months after Mr. Ben Ali was deposed. The feat of that overthrow was not only momentous within the borders of Egypt itself; its repercussions were felt in the halls of Arabia, Asia, Africa, and the Americas.

In Washington, Tel Aviv, London, Berlin, Paris, and Rome and on Wall Street, there was plenty of catching up to do. Neither the eavesdroppers at the National Security Agency nor the black ops mangers of the Central Intelligence Agency predicted the end of the Mubarak regime. Indeed, it wasn’t until the bitter end that the political powers in the aforementioned capitals began to side with (and subvert) the popular uprising in the streets of Egypt.

After Mubarak’s fall, the revolutionary fire spread like flames whipped by warm Santa Ana winds. Bahrain to Libya. Yemen to Syria. London and New York. Athens and Oakland. The insurrectionary wave was in motion and nowhere was it more powerful than in the Arab world.

Also, nowhere was it met with more determined (and murderous) resistance from the powers that be, internally and externally. Underlying the insurrectionary tide were the economic facts of neoliberalism’s struggle to maintain its global dominance. When it became apparent that this goal could not always be accomplished by continuing to support the old regimes, the capitals of capitalism inserted their agents into the opposition and did their best to manipulate the rebellion into serving the agencies of those capitols.

The IMF, World Bank and the rest of the usual suspects saw their moments in each instance and made their moves. As I write, the entire insurrectionary wave is at a stalemate between the forces of popular social justice and just another new face for western imperialism.

Naturally, very little has been written about this aspect of the revolutionary upsurge of 2011-2012 in the organs of neoliberalism. Instead, the fact of IMF arrangements with the post-Mubarak Egypt and the new Tunisia are interspersed with superficial analyses of the rebellions that would have the reader believe that it was social media that provoked them.

Even more revealing of the mainstream media’s allegiance to the imperial regime in the insurrection is its lack of coverage of the continuing popular resistance in the Pentagon’s shipyard Bahrain. Instead, we are presented with an ongoing litany of unconfirmed atrocities committed by the Syrian military and a portrayal of the resistance there as essentially untainted by its affiliation with outside governments and militaries.

Fortunately, we have Vijay Prashad. His latest book, titled Arab Spring, Libyan Winter, attacks the western interpretation of the transitions in Egypt and Libya and explores the actual events from a perspective that explains the players in terms of their allegiances, holdings, and politics.

In Prashad’s work, the differences between the fighters on the ground and the suits on television are not only acknowledged, they are examined in terms of their meaning to the future. In discussing Egypt, Prashad describes the conflagration of Washington’s imperial needs, Tel Aviv’s paranoiac perception of its security, and the Mubarak clique’s desire to maintain power.

He gives lie to the West’s claim that it was interested in democracy (a relatively simple task to be sure), explaining that in the western mindset democracy doesn’t mean democracy, it means a guarantee that the interests and holdings of capital will not be upset. The common term one hears, states Prashad, is stability.

Most of this book is about the battle for Libya. Prashad’s text provides the most detailed description of the events both on the ground and in the office suites. He exposes the humanitarian intervention by NATO for what it was. That is, a means for the western powers to regain unfettered access to Libyan oil and rid themselves of an at best erratic client — Muammar Qaddafi.

Unlike many on the Left, Prashad does not take sides for or against the rebellion. Instead, he explains the uprising as a popular and positive thing that was manipulated by the forces of the G7 and NATO. Simultaneously, he discusses Qaddafi’s reign as one that began with many positive changes yet ultimately was a victim of its own excess and greed.

If there are any good guys in his narrative, it would be the masses that risked their lives to overthrow the autocracy that had Qaddafi at its helm. Their opposite would be the men on both sides of the battle whose only real interest was in keeping their bank accounts plush while serving their masters in the stock exchanges of the neoliberal world.

An interesting, and as yet not very closely examined, aspect is the role of the Gulf Cooperation Council (GCC) states of Bahrain, Kuwait, Oman, Qatar, Saudi Arabia, and United Arab Emirates. Jordan, and Morocco. Prashad makes note of the fact that the western capitals have said very little about the harsh repression visited on the Bahraini uprising or the Saudi intervention there.

He also explores the military role played by Qatar in Libya, its current role in Syria, and the inclusion of some GCC states in a NATO adjunct. Perhaps, writes Prashad, this adjunct of NATO will be able to stand in for NATO in future operations in the Arab world, thereby creating another shadow in the workings of modern imperialism.

Despite the (probably) millions of words written about the Libyan uprising and the NATO intervention, nothing written in English has come near the truth. After reading Arab Spring, Libyan Winter, I believe that, when all is said and done, Prashad’s work will come the closest.