BOOKS / Sarah Bird : ‘How Perfect is That’ 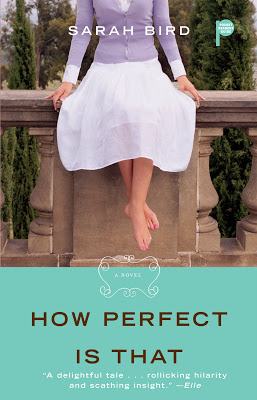 How Perfect Is That

Suffice to say, Sarah Bird has constructed a multithreaded story that has more heft than many would expect for all the ‘chick lit’ labeling she gets.

OK — so if How Perfect Is That is “chick lit,” then paste some feathers on me and I’ll run around the barnyard a couple of times. I love this book and I can’t remember when I have laughed out loud so much in one reading.

The paperback edition recently graced the bookstore shelves, just in time for wallets assaulted by the “Big R” to accommodate its purchase. As you can see by the reviews on its first inside page, it’s been a huge hit nationwide — including an Elle Readers’ Prize and a spot on the New York Post’s “Required Reading” List. But for Austin readers, especially those in certain zipcodes, there will be an added fillip of interest. (“Doesn’t his last name rhyme with ____? And “she must be referring to _____. And that house must be ___’s right across from _____.”)

Imagine Dorothy Parker’s sensibility transferred to the dot-bomb era in Tarrytown and Westlake. Mix it with the intellect and sardonic language of P.J. O’Rourke and a helping of Phyllis Diller. OK, so there’s also a pinch of F. Scott Fitzgerald. (Thinking: those shirts on the bed that made Daisy Buchanan cry, not to mention the green light glowing in the distance past the dock — which in our town might have been the violet crown at some point — or at least a houseboat light upstream on Lake Austin.)

Sarah herself has a strong voice which never gets too heavy-handed at moralizing, but she does convey a message among all the mayhem. The book is something like Pilgrim’s Progress in fast forward up to the pinnacle and then in agonizingly slow rewind back down the slope. (Including some trips to feed the disadvantaged on a two-person recumbent bike.)

The protagonist and narrator is Blythe Young, owner of Wretched Xcess Event Coordination Extraordinaire — caterer to the social stars. After years of dolling up TTown and Westlake mansions with four digit thread count tablecloths, titanium chafing dishes and tidbits fit for Louis XIV (“. . .in every case, they wanted the Beluga”), all of a sudden, she is having to cut the pate with Crisco and formulate ways to mask the best morsels Sam’s has to offer with dollops of “exotic” sauce. (“So the polenta I am serving may or may not be Cream of Wheat enlivened with the magic of sunny yellow popcorn seasoning. . .the watercress sandwiches may or may not contain St. Augustine clippings. . .”)

Then imagine if you will, a social climber’s worst nightmare.

After years of struggling to the top of the Pemberton nosh pit, our caterer is suddenly slammed back down the ladder to sharing a bathroom in Seneca House — the west campus co-op on Nueces she inhabited many years ago as a student. She’s surrounded by it all. The whacked-out trust fund girls from River Oaks trying to act Rastafarian. The carpets which fifty or sixty years ago might have been a recognizable color. A huge cat named Big Lou, still there. Plus a gaggle of her unpaid waitstaffers who are ready to throttle her. Not to mention an IRS agent lurking in the shadows who wants to have a sit-down — and an old flame, now a star record producer, who has a strong distaste for downloaded music files.

At one point, Blythe falls even lower. But I’m getting into spoiler territory here.

Suffice to say, Sarah Bird has constructed a multithreaded story that has more heft than many would expect for all the “chick lit” labeling she gets. This is a tale of passion, customs and social history that ranks with Edith Wharton but is delivered in the fast pace of 21st century language.

As for other characters — Millie, Blythe’s long-time pal and foil, is one of the most genuine and good-hearted souls you’ll ever encounter in literature. And the attendant cast from Trey, the ex-hubby, to the “Old Austin” ladies and the fellow Seneca residents like Jerome and Sanjeev and Olga, each bring their own engaging twists to the plot.

Bottom line, there’s still time to grab a copy and make this the top book on your stack of summer reading material, perfect for Marfa, Aspen, or your neighbor’s above-ground pool.

(One personal note — I’ll think twice about ever drinking a Kir Royale again.)

Find How Perfect is That on Amazon.com.

This entry was posted in Rag Bloggers and tagged Austin, Books, Criticism. Bookmark the permalink.