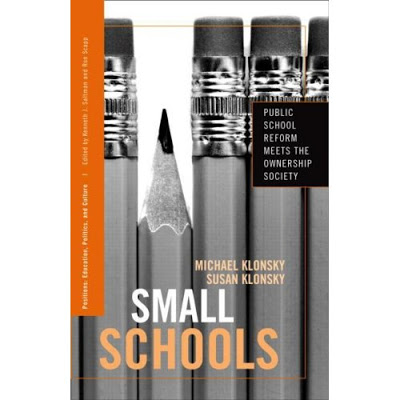 ‘Read Small Schools to get angry and radicalized’
By Jill Davidson

Mike and Susan Klonsky’s Small Schools: Public School Reform Meets the Ownership Society deserves to have sunscreen stains on its pages and sand within as an unlikely recommended summer read. Okay, if there’s a great novel that you’ve been saving for the week that school’s out, read that first. But before school starts up again,* read Small Schools to get angry and radicalized, to remind yourself of the extraordinary value of your work, to cheer for yourselves as worthy alternative underdogs, and to rekindle your fire.

A nightmare gallery of monsters menace public education, and the Klonskys invoke some of the most frightening: the gang of politicians, foundations, think tanks, and corporations that have invaded schools during the still-current Bush administration. Documenting the ways that “the progressive grassroots educational reform movement for small schools has been hijacked by business groups, right-wing ideologues, and the ideology of the Ownership Society,” the Klonskys throw readers into the deep end of the small schools movement, the threats posed by corporate and governmental encroachment on public education, and the toxic ground on which privatization forces have co-opted small schools for corporate gain, both in the authors’ home turf of Chicago and elsewhere.

The breathless pace slows in the first chapter, which unpacks small schools’ “traditional democratic values of Deweyan progressivism combined with Information Age notions of professional community, personalization, and safe learning environments in an unsafe society.” This chapter focuses on the story of opposing school reform movements in Chicago, serving as a useful primer on that city’s tension around school size, control, and ideas of whom its schools are for. This inside baseball of Chicago politics, school reform, and role of the Klonskys’ Small School workshop is contextualized within the movement that includes Deborah Meier’s work in New York, southern Freedom Schools, and other results of progressive efforts around the country. This chapter also captures the “politics of disaster” that have been created in response to public schooling’s complex challenge, describing how a deficit model of education has evolved to dismantle existing public systems.

The sprawling second chapter details and defines the forces and practices of the Ownership Society and its “all-out assault on teachers, public schools, and public space in general.” Featured in President Bush’s 2005 inaugural address, the term was intended to sell the idea that individual citizens should control health care, finances, education, and other key factors of their lives. The Klonskys vehemently oppose the political practices that exemplify the Ownership Society, and their arguments effectively encapsulate the rhetorical co-option of words and ideas—such as the very concept of small schools—that may have originated from the grassroots progressive education movement, but have come to be fully integrated into the current administration’s “demagoguery.” This is compelling stuff.

The third chapter deals with the privatization of our school systems. When the Klonskys write, “In many districts around the country, the best of the small and charter schools have indeed become agents of change, responding to a national sense that the traditional system of public education needs transformation,” you’ll think “Hey, that’s us! That’s CES.” But such schools are anomalies whose existence emphasizes the gulf between intended purpose of charter schools—to provide stimuli to the system and grassroots-driven alternatives—and their current uses as for-profit collectives that rob the public system.

The book concludes with considerations of the role of philanthropy, with most of its attention on the Bill & Melinda Gates Foundation (a CES funder). “It’s hard to say whether the world’s richest man has been part of the problem or part of the solution,” the Klonskys observe. They are far less ambivalent on the role of conservative think tanks that rose to power on a tide of private funding and adept use of technologies that allowed them to emerge from the shadows.

The conclusion “Alternatives to Top-Down Reform,” offers a welcome, and familiar, note of hope, with its faith in the power of professional learning communities. Critical Friends Groups to the rescue! Though its documentation of the forces that oppose what we know works to educate children, and preserve and improve the intellectual and other forms of health of their communities, is daunting and at times heavy-handed, you’ll finish Small Schools with renewed faith in your work as a CES network educator, and a healthy infusion of anger and energy.

* Year round schools: the bane of the education book reviewer. Sorry to slight those of you who are at year-round schools, but you still experience summer, yes? And you still read? Apply this as you see fit (Horace suggests liberally).