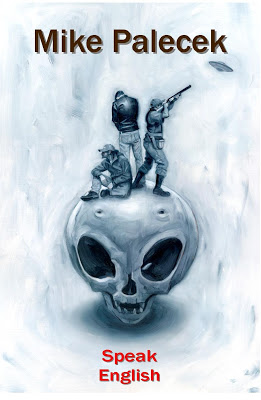 Speak English, by Michael Palecek, speaks the truth, and in English.

Combination road story, sci-fi mystery, philosophical consideration, and political castigation of just about everything, Mr. Palecek’s book is a must-read for all who seek justice, peace, accountability of elected officials, and penetration of the myths that cloud our political vista.

With unique and dazzling style, Mr. Palecek takes us with him on a cross-country book tour during which we encounter many of the gutsy anti-establishment heroes and heroines of our times.

This account is book-ended by an intriguing tale of country boys engaging with aliens and flying saucers.

The seeming disparity between the extra-terrestrial yarn and the contemplative trek across the United States is resolved, finally, in a surprising twist which leaves the reader awestruck yet satisfied.

The author is obsessed with his beliefs that the 9-11 tragedy was caused by George Bush and his cronies, and that President Kennedy’s assassination did not occur as the official investigation findings claim.

He is also heartbroken about Paul Wellstone’s death in an airplane crash and suspicious that it, too, was a politically-motivated killing.

One comes to believe, while reading the book, that these are not necessarily crackpot conspiracy theories but rather enigmas deserving of much deeper probing.

Just as the book’s protagonist encounters many adventures on his book tour, we, the readers, encounter twists and turns from paragraph to paragraph and page to page that make our perusal of his book one big adventure. It is difficult to adequately describe its immense sweep and broad diversity of style and subject.

This is a page-turner. Curl up in a comfortable chair with a healthy dose of cynicism and open-mindedness for an enlightening and entertaining trip through America’s (no-)heartland and the author’s unique, inquiring sensibility.

[Joan Wile is the author of Grandmothers Against the War; Getting off Our Fannies and Standing up for Peace (Citadel Press, ’08).]