BOOKS / Thomas McKelvey Cleaver : Goodbye to the Joys of Browsing 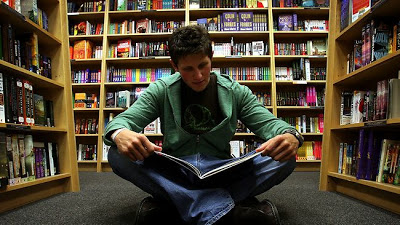 SAN FERNANDO VALLEY, California — It was too bad to find out that Borders bookstores are closing. Granted, in the past year the Borders here has been a shadow of its former self, and it never was all that good if you compared it to the old Barnes and Noble stores that departed a few years back. But it was a bookstore that was local, and you could browse.

There is now no bookstore that even resembles that store here in the San Fernando Valley. There’s a mystery bookstore all the way across the valley in Burbank, but when I called them they didn’t have any Alan Furst novels and didn’t even know who he was (a really cool Graham Greene sort of novelist who does fantastic World War II spy novels that are so historically accurate and so dramatically good they’re a time machine to take you back to then).

But no more general interest stores, where you can go where your interest of the moment takes you.

I think bookstore and library browsing — going looking for one thing, pulling out another book at random, and being interested enough to get it — has probably been one of the most important things in my life, especially in terms of life-changing events.

I remember being age 10, at the Eugene Field Library in Denver, and being tired of what passed for “young adult” books, so I stepped around the corner and discovered Ray Bradbury and Isaac Asimov in the science fiction section. I read everything that was there.

Then I would go downtown to the main branch and browse there (what absolute fun: take the bus at 9 a.m. and spend the day in the stacks — except when I’d go across the street to the Jewish delicatessen where I discovered the joys of corned beef sandwiches and pickles — then come back home with my arms full of books).

I never knew what I was going to get until I found it there on the shelves. And thus began my self-education — in spite of the public miseducation system. 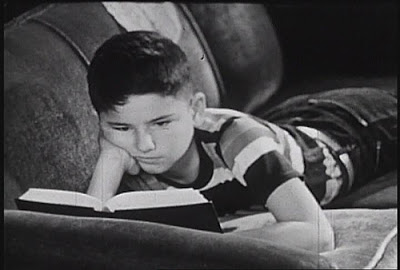 Discovering Ray Bradbury? Image from Almightydad.
Thirty five years after that life-changing event, I met Asimov and Bradbury as an equal (well, an equal member of the Science Fiction Writers Association [SFWA]; I’d never categorize myself as their equal as a writer). I even told them how I first met them. Asimov gave me his fourth Foundation novel and inscribed it, “To Tom, our minds met long ago.”

Just the other month, in our local Borders, I was looking through the military history section, and ran across a book with an interesting title, a book I hadn’t even known would be there and wasn’t looking for. I pulled it out, paged through it, read the introduction, thought it was interesting, and bought it.

Two weeks later I was friends with the author, who introduced me to his agent and publisher, and now my writing career has taken another big turn and I am writing a book I have thought of writing for maybe 20 years — to be published later this year.

I’m sorry, but what passes for “progress” these days mostly isn’t.

1 Response to BOOKS / Thomas McKelvey Cleaver : Goodbye to the Joys of Browsing