BOOKS / We Are All Zimbabweans Now 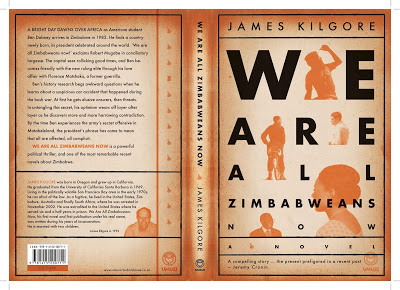 We Are all Zimbabweans Now (a brief summary)
By James Kilgore / The Rag Blog / September 1, 2009

We Are All Zimbabweans Now tells the story of young American historian Ben Dabney who arrives in Harare in 1981, full of admiration for Robert Mugabe and Zimbabwe’s policy of reconciliation. His euphoria in this country he calls the “Land of Forgiveness” heightens when he becomes involved with disabled ex-freedom fighter Florence Matshaka who connects him with the emerging black elite.

His research, however, takes him down a different path. When he explores the case of a liberation war leader who died in a mysterious car accident, he receives elusive answers, then threats. An interview with a teacher in rural Matabeleland, propels him into the middle of the army’s offensive against “dissidents” and civilians in that part of the country. As he delves more into his research the dangers deepen and the connections of Florence to mysteries past and present force Ben to confront difficult decisions about career, love, parenting and political principle.

While written in the style of a detective thriller, the story deftly analyzes the complex struggles for power in post-independence Africa. The characters and events of this fascinating tale will resonate loudly for South Africans as well as those familiar with Zimbabwe.

[James Kilgore grew up in the San Francisco Bay area where he became immersed in left-wing politics in the early 1970s. His involvement with the Symbionese Liberation Army (SLA) led to charges for possession of explosives in 1975. Kilgore fled, remaining a fugitive for 27 years. During his time underground, he earned a Ph.D. and moved to southern Africa. He worked as a high school teacher in Harare, Zimbabwe where he met his wife, Terri in Harare. They married in 1988.

In 1991 the couple moved to South Africa where Kilgore served first as director of Khanya College in Johannesburg and then Co-Director of the International Labour Research and Information Group (ILRIG) at the University of Cape Town. He worked extensively with trade unions and social movements in the region. He also authored a wide range of academic and educational materials, including: Economics: An Introduction for South African Learners; Cost Recovery and the Crisis of Service Delivery in South Africa (co-editor); Making History (co-author); People Making History, Books 3 and 4 (co-author).

Kilgore was arrested in Cape Town in 2002 and extradited to California. After his incarceration he received extensive support from academics and activists in South Africa and Zimbabwe, including letters to the court from Archbishop Desmond Tutu and the Nelson Mandela Foundation.

He served six and a half years in prison, spending much of his term teaching math and computer skills to other inmates. He was released in May 2009 and currently lives with his wife and two sons in Illinois.]

Find We Are All Zimbabweans Now: A Novel by James Kilgore, on Amazon.com.

This entry was posted in Rag Bloggers and tagged Africa, Books, Literature. Bookmark the permalink.

1 Response to BOOKS / We Are All Zimbabweans Now