Brandon Darby : FBI Informant is Provocateur, Not a Hero 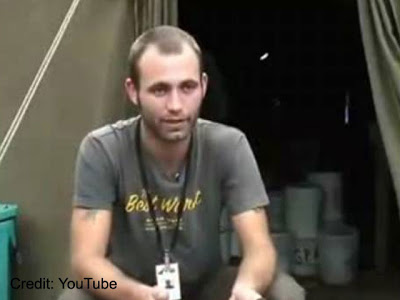 ‘FBI informant Brandon Darby did not heroically intervene to stop violence. Rather it appears that he actively sought out people that he could manipulate and entrap.’

AUSTIN, Texas — A group of Austin activists today released their conclusions from reviewing over 70 pages of FBI documents obtained through a legal case regarding alleged actions to protest the Republican National Convention (RNC). From reading the documents, and from their own experience with him, these activists have concluded that the FBI informant Brandon Darby did not heroically intervene to stop violence. Rather it appears that he actively sought out people that he could manipulate and entrap. The two Texas men that Darby was most closely associated with during the convention, Bradley Crowder and David McKay, are accused of making Molotov cocktails and have been in jail since early September. Their trial is set for January 26. The disclosure of Brandon Darby as the informant casts further doubt on the charges against these two men.

According to the FBI’s documents, Darby, posing as an activist, had been covertly gathering information for the FBI since at least February 2007, twelve months before he ever met Crowder or McKay or knew of any plans for the RNC. “As an older seasoned activist, Darby had a lot of sway over Crowder and McKay, making them susceptible to his often militant rhetoric,” said Gabby Hicks, who was in St. Paul with Darby during the Convention. “He was always the one to suggest violence, when the rest of us clearly disagreed with those strategies.”

Darby has been characterized by many people who have known and worked with him as both persuasive and manipulative, with a history of provocation, instigation, and incitement. According to Lisa Fithian, who worked with Darby for years, “Brandon was always provoking discord and aggression, in the anti-war movement in Austin in 2003, in protests in Houston against Halliburton, and in disaster relief at Common Ground in New Orleans. I worked with Darby in all of those places and saw the disruption he caused.”

The FBI documents make it clear that Darby did not restrict his informing to people he alleges were planning illegal activities. He also gathered information on numerous people who were engaged in lawful activism; including some who had no plans to attend the Republican Convention. “The wider net cast by Darby in his information gathering shows that he was part of an FBI campaign to suppress political dissent and activism,” said Will Potter, an award-winning independent journalist. “By gathering information on law abiding activists and then defending his actions as stopping violence, Darby contributes to the public perception that political dissent is criminal, which has a chilling effect on free speech.”

Because of Darby’s leadership role and his militant rhetoric, two impressionable young men, who have been held without bail since September, now face 7 to 10 years in prison. As the prosecution prepares for trial, friends and family of McKay and Crowder are hoping for a not guilty verdict. “We miss him a lot,” said Mckay’s father. “Every night David calls – at this point those calls mean everything to me.”

For more information contact the Austin Informant Working Group at texas.solidarity@gmail.com. People in this community are also available to speak to the media about their experiences with Darby and the results of his malicious actions.

6 Responses to Brandon Darby : FBI Informant is Provocateur, Not a Hero